Venice, 66 Frenchmans Road, Randwick, NSW 2031, is a comparatively rare and distinctive example of late Victorian architecture retaining most of its period detailing intact.

The house and remaining garden make a notable contribution to the Frenchman Road streetscape and the early historical identity of Randwick. The house is of architectural significance to Randwick and to New South Wales. (Heritage Office files) 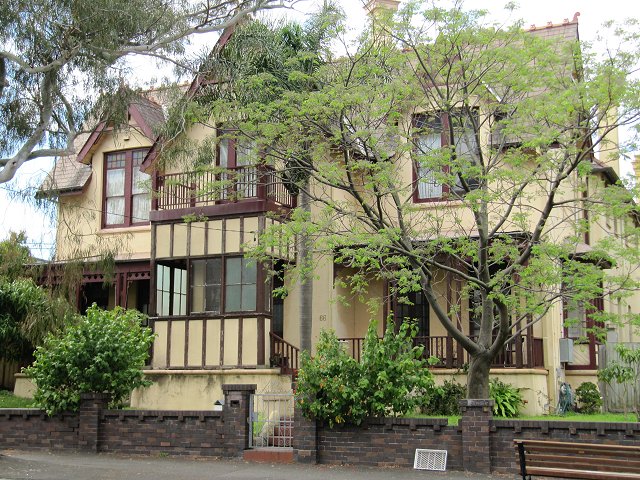 Constructed during 1884/1885 by Stephen Gee, in 1920 it was converted to flats. In 1920 Venice is referred to for the first time in the Directory as Venice Flats with four residents listed. During this time it was altered considerably during its conversion to four self-contained units. (Moore 1989)

In 1979 Venice was purchased by Dr.H.M Kalmuth for a family home and restoration commenced in the 1980s.

In plan the house is also symmetrical with a centrally placed hallway of generous proportions incorporating a grand staircase, behind which is located an intricately patterned stained glass window.

The ground floor reception rooms are located either side of the hallway while to the rear right-hand side is sited the service wing.

Period detailing is of a high standard throughout with diagonal chimneys, tessellated tiled path and hallway, leadlight front door, bay windows, timber wainscoting, fireplaces and elaborately moulded cornices, ceilings and roses.
The resultant design is very distinctive and there is no similar house design within the Municipality of Randwick.

The quality of the detailing and design suggest the use of an architect, although no conclusive evidence is available to substantiate this view. (Heritage Branch files) 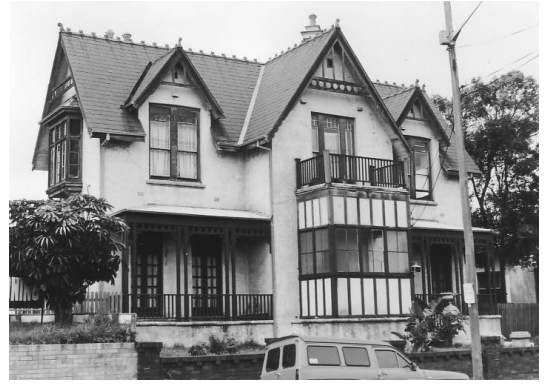 The site on which Venice stands was originally part of a 30 acre 3rods and 9 perches Crown Grant to the Church of England and Ireland. In 1882 the Church began sub-dividing the land under the name of St Marks Glebe. 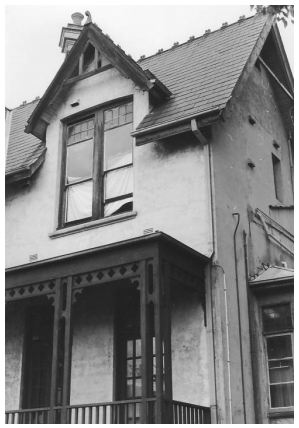 A Sydney solicitor, Thomas James Dickson leased Lots 1 and 2 Section 1 for the term of 99 years. The rent was 13 pounds per annum and the lessee was expected to build a solid house on the land, maintain it, pay the rates and taxes. No noxious trades were allowed for example boiling down works, slaughter house or beer house.

In 1884 Dickson sold the residue of his lease to Stephen Gee a builder of Sydney for the sum of 20 pounds. This amount indicates that some type of building would have been erected, most probably the stables.
The deed indicates ‘the parcel of land as described together with…all houses buildings, ways, paths etc…for the remainder now to come and unexpired of the said term of 99 years.’

In 1889 Gee sold the residence of his lease for these 2 lots to Joseph Jonathon Dakin for the sum of 120 pounds an increase of 600% which indicates undoubtedly that Gee built this ‘gentlemans’ residence. The annual rent fixed by the Church of England remained at 13 pounds per year. Dakin was a builder from Randwick.

The Sydney Water Board map of 1891 shows water connections to all completed houses in this area of Randwick. An outline of Venice and two small buildings to the rear is shown. Also shown is a ‘fountain’ marked on the north side of Venice to which a water connection appears.

The Sands Directory of 1893 contains the first listing of a resident for No.66 is a Mrs Nicholson and the next year a Mrs. Maquire for the next two years. It is interesting to note that the building does not appeared to have been lived in by Stephen Gee for more than six years.

From 1897 to 1906 the name Venice appears in the Sands Directory with resident G.H. Holmes. It is possible that Holmes was a lessee during these 9 years. From 1909 to 1919 a number of different names are listed as residents for the ten years.

In 1920 Venice is referred to for the first time in the Directory as Venice Flats with four residents listed. During this time it was altered considerably during its conversion to four self-contained units. (Moore 1989)

In 1979 Venice is purchased by Dr.H.M Kalmuth for a family home and restoration is commenced in the 1980s.

Following representations by the Randwick Historical Society expressing concern over the dilapidated condition of Venice an Interim Heritage Order was made over the property on 27 July 1979.

At its meeting of 7 May 1981 the Heritage Council of NSW resolved to recommend that a Permanent Conservation Order should be made over the property. On 10 July 1981 the then Minister for Planning and Environment the Hon. Eric Bedford MP approved the making of a Permanent Conservation Order. An objection to the proposed Order was subsequently lodged and a Commission of Inquiry was set for 11 February 1982.

In 2009 funding was provided through the NSW Heritage Grants program for conservation works. (Heritage Branch files)

Other Gothic houses in Sydney: