Redcourt, the corner of Dandenong and Orrong roads, the residence of Mrs. Norman Falkiner (1916). (The Argus Friday 1 December 1916)
Many mansions and large houses in (Toorak) saw service as guest houses or boarding houses including Redcourt at 506 Orrong Road (Malone, 2005:22).[1]
“Where does one start with this? A magical house with immense street presence and character. Major work needed maybe in the eyes of many to transport this into the new millennium as family home. Street does carry traffic and on-block position not great. Bones and size of house are obviously very good – real creativity will be needed here for the buyer to transform this – could be a fantastic opportunity.”[2]

No suburb epitomises Melbourne’s “leafy east” than Canterbury. In fact, agents joke, it’s difficult not to find a street in Canterbury that doesn’t exude charm. Most are wide, welcoming and dotted with hundred year old trees, and Federation homes built on large blocks with established gardens.
Canterbury’s “Golden Mile” as it has come to be known, stretches from Burke Road to Balwyn Road, off Mont Albert Road and, in order of exclusivity, includes Monomeath, Victoria, Alexandra and Wentworth avenues[5]

Colinton, 92 Mont Albert Road Canterbury was built in 1926 to the design of the architectural firm Barlow and Hawkins as the family home of Walter Gillespie of the noted family of flour millers.

Architects, Ussher & Kemp acted for Mellor when the house was connected to the MMBW sewer, in 1907, and it appears that they were also the designers.
At Coorinyah, the broad hipped roof is the dominant backdrop for a number of gabled roof forms, chimneys and the unusual shingle- spired look-out, with its attached chimney. Below the eaves line giant arched timber supports spring between gabled verandah or room bays, almost removing the visual support for the large roof expanses above it.

This non-heritage listed house built in 1901 demonstrates the fusion of Queen Anne with decorative Art Nouveau leadlight and stained glass.

H D Annear purchased the site for 170 pounds. He subsequently designed and erected three houses on it, each have an allotment 100ft x 160ft. They are:

The beach-side suburb of Elwood has experienced ongoing gentrification, known for its mix of Edwardian and Interwar architecture character, its beaches and its leafy streets many of which are lined by London Plane trees. 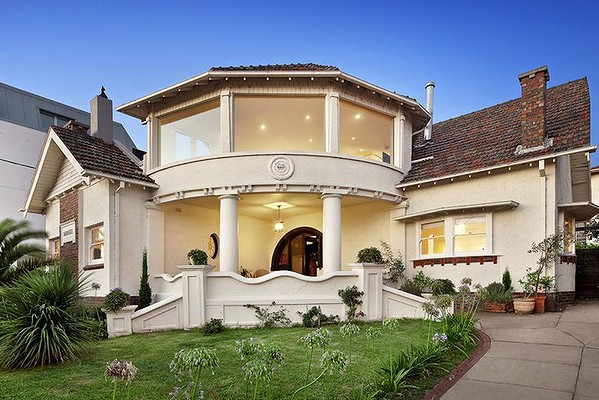 “This 1920s house is a rare beachside beauty. So many of these types of houses have fallen to shabby disrepair, with modern bayside living unable to reconcile the period floor plan, the functionality of space and the more intricate details with the new-millennium brashness and desire for views and veneers. (Not on Heritage register)[8]

“What’s happened here, then, is a revelation; its period beauty has largely been left to shine on its own. 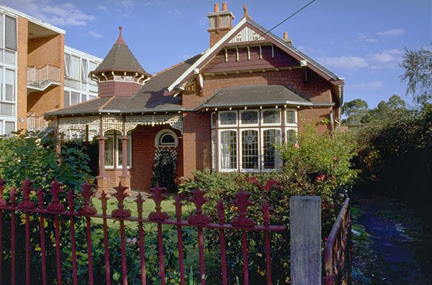 41 Kent Street, Flemington, built in 1912, is an excellent example of the Federation Queen Anne architectural style with an unusually high level of intactness and integrity.

A large and late example amongst the best of the buildings constructed in the second development period at Grace Park which incorporates many standard design Grace Park features. A landmark in the Urban Conservation Area which has State wide significance in the development of the Garden Suburb. A fine example of the transition between the Queen Anne (or Federation) styles and the Garden Bunglow.

“Tay Creggan is a national treasure“. Built in Hawthorn in 1889, Tay Creggan is considered one of Australia’s most important houses. “Tay Creggan” – the house on the rocks – is the fantastical building of gables, dormers, turrets and tall, twinned chimney stacks that can be glimpsed from across the Yarra at Richmond.

The house known as Tay Creggan, in Hawthorn, was built in 1893 by the architect R G W (Guyon) Purchas as his own residence. It is a large two storey residence designed in Federation Queen Anne style. Built from red brick, a characteristic picturesque effect is achieved with the asymmetry of the design and quality of the eclectic detailing. The roof of varied forms has Marseilles pattern terracotta tiles with ridging, prominent gables, turrets, decorated octagonal chimney pots and dormer windows.

Street view of Davies House, designed by architects Ussher and Kemp,Registered on the RAIA 20th CENTURY BUILDINGS REGISTER (but not heritage listed)

Also designed by architects Ussher and Kemp. Not heritage listed, but registered by the RAIA on the 20th CENTURY BUILDINGS REGISTER

Marathon is a large residence and garden established in 1914-24 in the Federation Arts and Crafts style. The house features a conspicuous gabled roof, a tall broad stuccoed chimney and contrasting textures of building fabric, typical of the Arts and Crafts style. The style is also demonstrated in the garden design by the geometric compartmentalised areas, many with central axes, terracing and use of stone for steps and retaining walls.

Every Alfred Crescent resident shares the magnificent Edinburgh Gardens as a front yard.

“This stylish Edwardian brick property (not heritage listed) has good street appeal with its attractive Queen Anne influences and corner position opposite Edinburgh Gardens. The appeal is further enhanced with views over the city from the roof top terrace. What may concern family buyers are the stairs to the upstairs bedroom, as they are steep and have narrow treads making it difficult for young children to use. To my way of thinking this property still needs a considerable renovation as there is no connection to outside from any living/family rooms and the master bedroom lacks an ensuite and wardrobes. That said this property will still hold considerable interest, as buyers will see its proximity to St Georges Road shops and cafes, schools and public transport all big pluses,” [17]

Acclaimed as one of Melbourne’s most distinctive Federation villas, Nocklofty is renowned for its splendidly proportioned living rooms and exquisitely detailed joinery featuring a profusion of Australian floral and animal motifs, the work of its first owner, the engineer Kenneth Munro, who designed and built the house over several years after 1906. The house, influenced by Art Nouveau and Arts and Crafts Movement trends, is testimony to Munro’s optimistic vision for the newly federated nation. With its decorative belvedere, deep bay windows and elaborately detailed return verandah, the residence presents a dignified facade to Princes Park; it is the only house in Royal Parade to possess a second street frontage to The Avenue.

These elaborate double storey semi-detatched Edwardians / Federation Freestyle mansions are part of a conservation precinct which made sure that they were preserved.[23]
Nos 2 to 10 Fitzroy Street comprise two buildings containing three (Nos 2-6) and two (Nos 8-10) semi-detached houses. Nos 2-6 are known as Elenara and Thalassa.

Majella is of considerable significance as a remnant of the earlier residential scale of St Kilda Road, now dominated by high rise buildings and of the large Victorian and Edwardian mansions that formerly combined to make St Kilda Road a prestigious residential avenue. It appears to be the only surviving house built on St Kilda Road after 1900.

An iconic Toorak mansion, situated on Albany Road (one of Melbourne’s finest streets – with prestigious 60m frontage) and the corner of Whernside Avenue.
Little Milton is was built in 1926 on two allotments subdivided from the former Whernside estate. The house was designed in the Old English/Arts and Crafts style by Muriel Stott (1889-1985) in association with the architectural firm Stephenson and Meldrum 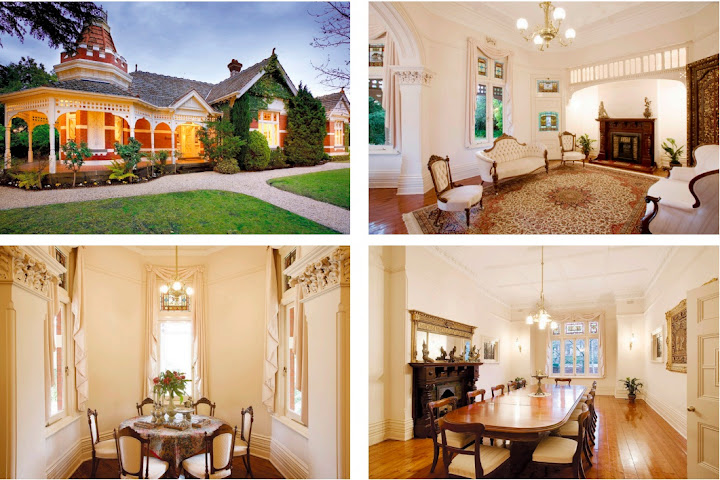 “Mr Warson paid $8.4 million for Coomaroo last year (2007), before subdividing the then 2,400 square metre block, into three. Mr Warson will incorporate one of these blocks into the backyard of his estate next door. The restored Coomaroo mansion, now on a 1,294 square metre block, is expected to sell for around $6 million. A block of land between the two homes, measuring 511 square metres, is for sale separately at about $2 million.[27]

Darnlee, constructed c. 1899 by builder J. Gibb, was designed by architect Leonard J. Flannagan for Mr C. McIntyre. It was a private residence until the Second World War when it was used as a hostel for the WAAF. Subsequently Darnlee has been occupied by the Health Department, serving as a tuberculosis rehabilitation centre, and the Department of Education, and was converted into an aged care facility in the late 1990s. Darnlee is a finely detailed and essentially intact example of a Federation Queen Anne style residence.[28]

“The house Dame Nellie sang in“.
Edzell was originally designed by the architects, Reed, Smart and Tappin in 1892 for James Cooper Stewart (1836-1919), a prominent Melbourne lawyer, Alderman of the Melbourne City Council and former Mayor (1885-86). The architect, Alfred Smart, was in charge of the design.

The Strand in Williamstown is without question the most expensive street in Melbourne’s west. She said the design of the street allowed for the most amazing views over Hobsons Bay, the CBD, Port Melbourne and even further on clear days.
Residences on The Strand are a mix of Federation homes, in amongst new homes many which span more than 100 square and appear almost entirely constructed of glass. 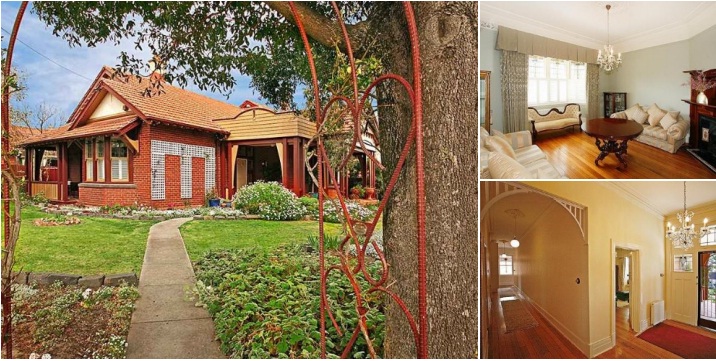 The residence at 59 Champion Road is of historical significance for its strong associations with the Newport Railway Workshops, one of the most important surviving 19th century railway workshops in the world. It is of architectural importance as an intact example of a Bungalow style suburban villa of the late Federation/Edwardian period.