“I first became aware of the work of Harold Desbrowe-Annear around 1964 when, as a student of architecture at RMIT, our design class led by Kevin Borland visited Eaglemont to walk around Walter Burley Griffin’s Glenard Estate (Pholiota, c.1919–20; Griffin’s own house; and Lippincott house, 1917, from Griffin’s office) and the Mount Eagle Estate (Griffin’s Skipper house, 1928), along with the adjacent Eaglemont Estate, within which three Harold Desbrowe-Annear houses were built.

Twenty years after my “discovery” of Annear and after a progression of renovations and additions to Victorian terrace houses in Carlton, followed by a restoration and upgrade of a large Edwardian timber villa in Fairfield, my wife Jane and I, sick of DIY projects, discussed the possibility of designing a new house for ourselves if we could find suitable land, with a provision that if one of Annear’s houses ever became available then we would attempt to acquire it.

Enthused by the house’s architectural, social and historic importance (but less enthused by our considerable mortgage) we embarked upon the amazing experience of restoration in November 1988.

Prior to settlement, I perused the Heidelberg Conservation Study written for the then City of Heidelberg in 1985.

As soon as we became the legal owners I proceeded to strip away small sections of the paint throughout the exterior.

by Peter Crone Architects IN THE ARCHITECT’S WORDS 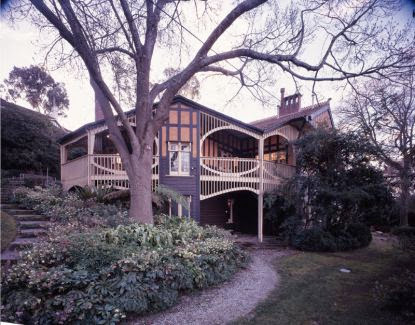 Chadwick house designed by Harold Desbrowe Annear in 1903, is the central house in a group of three designed by Annear, all of which benefit from Heritage Victoria registration, as well as National Trust classification.

Purchased by my wife and I in 1988, with an appreciation of its architectural,social and historical importance and with a considerable mortgage, we embarked upon its restoration,with the majority of the work being carried out by ourselves except for
contracting the electrical rewiring and plumbing works along with the manufacturing of specialised components.

Initially our first task was to prove the local council heritage study was incorrect in asserting that the original house coloring was “black and white”, as an early observation of flaking paint on the roughcast render indicated a strong colour beneath.

Further investigation of scrapings revealed a rich colour palette throughout the building exterior. Local Council planning approval was obtained to paint the house in its true colours. The other two houses have been found to share the same palette. Heritage Victoria is currently re-writing our Statement of Cultural Heritage Significance to take this into account.

Our first project was to restore the vandalised main Living Room area.

This project occupied 18 months of evenings and weekends.

Subsequent work on the external skin of the house involved replacing 15 original window sashes where various inappropriate windows had been installed.

Great care has been taken to recreate the original house,at the same time adhering to the principles of the Burra Charter with new work subtly identifiable from original.

With stage one completed,we are starting to address the removal of the inappropriate billiard room addition at the rear.Meanwhile considerable ongoing maintenance ensures that the vision of Annear is preserved for future generations to experience and enjoy.

One of my early projects was to restore the fireplace mantle and walls in the main living room and entrance hall. The original sequoia (Californian redwood) panelling and window brackets, along with the entire fireplace surround and overmantle, had been removed and replaced with fibrous plaster.

Peter Crone, LFRAIA, is the principal of Peter Crone Architects.

Art and Craft of Living

These lyrically woody houses are rare and valuable, writes Jenny Brown.
Architect Peter Crone’s passionate renovation of a rare and remarkable circa 1903 Arts and Crafts house on a remarkable site at the top of Heidelberg’s Mount Eagle (Eaglemont), has been an undertaking lasting 19 years.

There is one side of the house still to be excavated by removing a Federation (i.e. 1919) tack-on extension.

Peter Crone has his now-practiced eye for the way one of his architectural heroes crafted unique houses on a new project to restore another Annear house. It will be another mightily protracted renovation, yet he has already started in with a crowbar.

Chadwick House, 32-34 The Eyrie, was designed in 1904 by the architect Harold Desbrowe Annear for his father-in-law, James Chadwick. The house is a two-storey, Medieval inspired Arts and Crafts style building with half-timbered roughcast walls, a hipped and gabled Marseilles-patterned tile roof, arcaded chimney stacks and cantilevered gables. Internally the house has extensive timber panelling with built-in furniture and storage space.

Chadwick House has the half-timbered rough- cast walls the hipped and gabled marseilled-pattern tile roof arcaded chimney stacks and cantilevered gables.The swagged and ogee-arch slatted balustrading to its balconies and the overall picturesque disposition of elements have been borrowed from northern European 14th and 15th century domestic styles.

The artisan ethos is evident in everything to do with Arts and Crafts.

From the choice of materials; wood, brass, leadlight, lathe plaster, stippled walls containing plastered lumps of coal, turned joinery in organic shapes, to the merest details such as brass latches, hinges and catches.

Arts and Crafts houses in Victoria are relatively rare.

“We’ve lost a few,” says Tracey Avery, conservation co-ordinator with the National Trust. “Comparatively few were built in Australia. In Victoria, they were built in the country, in the Western District, and in the wealthier suburbs of Toorak, Parkville, East Melbourne, Caulfield and eastern suburbs.”

“If you have one of these houses, like Peter Crone, research the architecture and live with them before you alter them. In that way you’ll discover how practical they are. The interiors have an enduring beauty and simplicity that already fits in well with modern living. The built-in furniture is as practical today as it was 100 years ago.”

The renewed appreciation for the style is timely

because it presents a complete contrast to mass-produced modern, minimalist interiors. Instead, Arts and Crafts houses are about the enhancement of the material fabric. “It’s known as ‘truth to material’,” Ms Avery explains. “There is a sense of the emotional connection to materials. The timber and metal. They convey a craftsmanship that people seem to really appreciate. Even the door handles are both decorative and comfortable to use.”

So . . . Peter Crone has a bit of work on his hands but he is already rubbing them together at the prospect of tackling his mother-in-law’s restoration project. Fortunately, he loves working with wood.

Two lectures on the work of Harold Desbrowe-Annear: To be held in the courtyard at Walsh Street, the former home of Mr and Mrs Robin Boyd at 290 Walsh Street, South Yarra.

Harold Desbrowe-Annear: A Life in Architecture.

With Professor Harriet Edquist – academic and author of the acclaimed biography ‘Harold Desbrowe-Annear A Life in Architecture‘.

From the dustjacket:
‘Harold Desbrowe-Annear was an iconoclast and maverick:

The projects detailed in this study include

One of Australia’s most notable houses oh the early twentieth century the Chadwick House was recently awarded the AIA Victorian Chapter Heritage award as the culmination of 20 years painstaking research and restoration by Peter and Jane Crone.

Peter will talk about the detailed investigation of almost every aspect of the house that he and Jane undertook together with the experience and discoveries of doing most of the work themselves. It was a labour of love and celebration of craft but also an exemplary lesson in the value of heritage and good design.