Karori was built in 1888 as the summer retreat of Charles William Chapman – a mining and pastoral investor from New Zealand. Chapman imported many materials for the house and trees for the garden. He also brought over Italian-born and NZ-based architect Louis Boldini to design the house, which bears some resemblance to the highly decorative wooden homes found in NZ. Boldini, who designed many buildings in Dunedin in the 1880s, also designed nearby guesthouse Braemar , in which Chapman also held a financial interest. Read the rest
…
In 1898 the house was listed for sale and was purchased by Melbourne wool buyer Toussaint Dewez. The Dewez family had three gardeners and added many North American trees to the magnificent 6 acre grounds.
Dr. Robert Harbison and his wife Thelma purchased the house in 1972 and made some alterations including extending the service wing.

The current sellers have carefully restored the house, being mindful to preserve the original wood interior which features Kauri and Baltic pine lined walls, ceilings and floors. View some photos of the restoration project here;

Dominic & Marie Romeo at the entrance to their MAGNIFICENT home and most recent restoration and preservation project ‘Karori’ in Mt Macedon. Photo/Production – Danielle White/The Countryphiles.

The hillside town of Mount Macedon has one of the best collections of 19th century grand homes and exotic gardens in Australia. 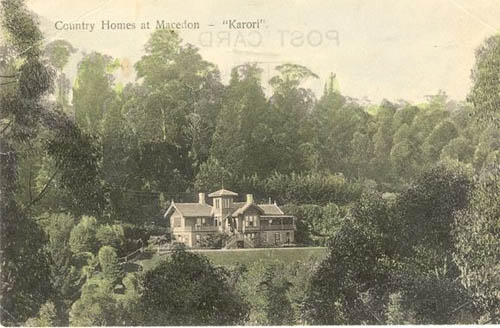 Photo Gallery (Photo Index below:)
by Jenny Brown
Story at SMH: Karori: A project for a romantic

This restoration enthusiast is smitten by the potential in a shabby 1890s chalet.
It’s lucky Dominic Romeo likes the cold, is passionate about the tasks of major heritage renovations and has a wife, Marie, who is an interior designer, because they’ve just taken on the task of fixing up ”Karori”, a heritage-listed 1890 hill station at Mount Macedon.
Mr Romeo says of the house: ”I was sold at the front gate even before seeing [it].”
When he saw the six-bedroom weatherboard pile in the overgrown 2.47-hectare garden full of huge, 120-year-old specimen trees, he says it took him a two-second visual survey to know ”this was it”.

The Swiss-Italian-style chalet with its decorative fretwork, fancy roof finials, tall chimneys and square tower was the very definition of shabby chic, albeit with impressive provenance.
Read more:

The glorious tree-lined road that winds its way up to Dominic & Marie’s beautiful home ‘Karori‘ on Mt Macedon. The autumn colour is nothing short of BREATHTAKING! Photo/Production – Danielle White/The Countryphiles.

Dominic & Marie Romeo at the entrance to their MAGNIFICENT home and most recent restoration and preservation project ‘Karori’ in Mt Macedon. Photo/Production – Danielle White/The Countryphiles.
WOW! Where do I start. Everyone I meet on The Countryphiles is AMAZING in their own and various ways (which is precisely why we feature them!). However, when The Countryphiles recently met husband and wife team Dominic and Marie Romeo ‘WHOOSH’ – up went the AMAZING stakes!

Clearly, with all those awards in tow The Countryphiles can’t claim to have DISCOVERED these two! However, The Countryphiles did discover a little of the passion and essence that lies beneath and fuels Dominic and Marie’s REMARKABLE list of talents, honours, generosity and achievements. Enjoy! x

‘Burnewang‘ restored by Dominic & Marie in the 1990s. The grand 34-room Jacobean/Elizabethan country homestead was built in 1903 and is situated on the banks of the Campaspe River east of Elmore. Photo – supplied. Production – Danielle White/The Countryphiles.

For many of us, the idea of renovating a bathroom is daunting enough, let alone restoring a 50-room Italianate mansion! Not so for this couple! So how did it all begin? Put simply – they worked very hard and they worked very well together. As young newly weds, Dominic and Marie’s first house was a Victorian cottage in Moonee Ponds. Before long they found themselves falling in love with, saving up, buying and restoring ‘Calder House’ in Maldon; a decision that unexpectedly launched them into a lifetime’s work and passion restoring heritage homes.
From the very beginning, the dynamic duo shared a DREAM to ‘one day’ own a large country estate homestead. Along the way, they came to realise they also shared what it took: a strong work ethic, great planning and research skills, self-belief, talent, passion and a ‘can-do’ attitude. Decades later, their dream has come true – a few times over. Dominic and Marie have restored 10 such homesteads including Burnewang (34-room Jacobean-Elizabethan homestead), Rupertswood (50-room Italianate mansion), Timsbury (including 5-acres of garden), Benue Lodge (five bedrooms each with an ensuite) and most recently Karori in Mt Macedon. 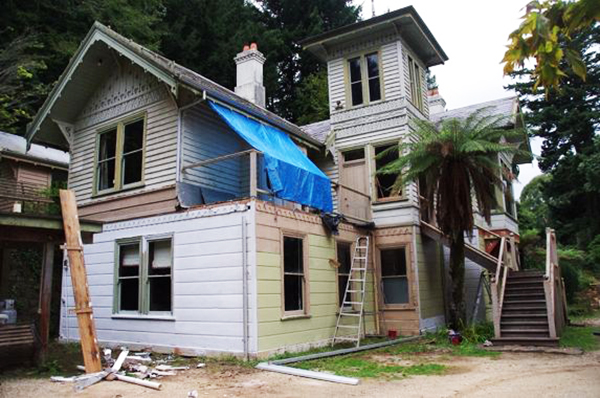 ‘Karori‘ pictured during the process of restoration. Dominic and Marie’s project work is thorough, coordinated and devoted in equal measure. A great deal of time and energy is put into paying painstaking attention to detail, which requires sourcing colours, wallpaper, fabric, carpet designs, furniture and fittings sympathetic to the architectural period of each property. Photo – supplied. Production – Danielle White/The Countryphiles.

The finished project. ‘Russia’ – Dominic and Marie’s beautiful Husky – is very much at home in the crisp mountain air that often envelops ‘Karori’. Dominic and Marie have just put Karori on the market – so you can get a sneak peek inside here! Photo/Production – Danielle White/The Countryphiles.

Karori – an outstanding Historic Mt Macedon Hill Station property perhaps one of the finest located on 6 acres of spectacular garden and grounds of epic proportions.