The Bourketown Conservation Area is of high value in reflecting the principal late Victorian and Federation period of development of the Drummoyne Area. The street layout survives from the original Bourketown subdivision, one of the earliest subdivisions of the area. The focal point of Bourketown is Bourke Square and it is in this vicinity that some of the finest individual buildings and groups of buildings are located, along with a small group of commercial buildings and the Drummoyne Public School.

Bourketown is important in retaining some Victorian housing, particularly in the vicinity of Bourke Square. This includes substantial houses on generous allotments as well as a scattering of worker’s homes. This development is surrounded by the Federation housing that dominates the streetscapes and, importantly, includes a range of housing from semi-detached speculative development closer to Victoria Road through to smaller freestanding houses to large houses of high individual value. These are representative of most styles of residential development from the Federation period and include housing for a variety of social classes.

The major houses are not confined to one location within Bourketown, but the major groupings are

A Federation House with Victorian decorative interiors:
“With high hedgerows and imposing presence, this meticulously renovated Federation home on a generous 763sqm corner block is a masterpiece of restored period styling with today’s comforts, located in an attractive tree-lined street.”

One of the few grand Federation houses of Drummoyne to survive in its original front garden setting. Individual design with some excellent period detailing. An important surviving residence indicative of many other grand residences of the Federation period that were located in the east end of Drummoyne.

An impressive large Federation house, c. 1915 on a large block. The house has a slate roof and verandah on two sides between a gabled projection. Outstanding features include the tower above, a splayed corner bay, a large window hood and “oeil-de-boeuf”. It also features excellent leadlight glazing, exposed rafter eaves and two coloured brick. The house appears virtually unaltered and has retained the original brick fence with wrought iron. The gates are of special note.

The grounds contain a period garden layout and fine fence from the Federation period. The fence is brown brick (with sloping cement caps to piers) and cast iron infill panels. In addition it has ornate cast iron posts with delicate cast iron gates. The garden layout contains a sunken gravel circular path layout with brick edging, circular island and border planting beds with a fine buffalo lawn. Trees include camphor laurel, crepe myrtle and relatively recent cotoneaster, camellias, Norfolk Island pine and hibiscus. There are also rose and annual beds and a curved border planting of agapanthus. Parts of the garden have been reconstructed sympathetically in Federation period style.[1]
Sold for $1,520,000 in Jul 2003 Last Sold $870,000 in Mar 2000[2]

Clovelly is an attractive riverside element representing the closer settlement of this area in the early twentieth century. It is a fine early twentieth century house retaining most of its original features and set in gardens overlooking the Parramatta River in a prominent location adjacent to the wharf and part of the important Drummoyne Avenue streetscape and one of the few surviving waterfront properties that retains house, setting and garden and waterfront features. 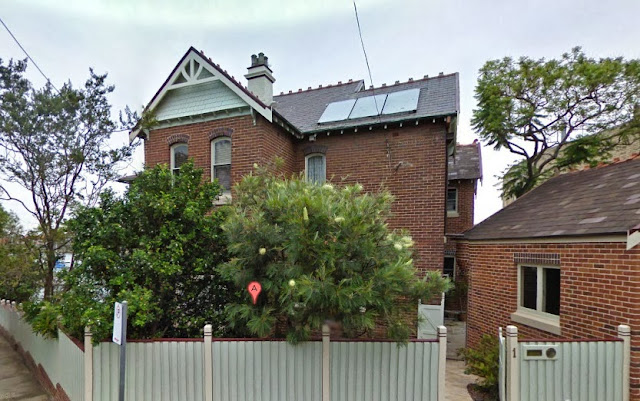 Clovelly is a substantial, two storey federation house built of red brick with some pebble dash features such as the chimneys. The slate roof has tile crestings. There is some fine timber work in gables, verandahs and porches and panels of leaded art-nouveau glass to the stair hall and the front door and porches.

Clovelly is an attractive riverside element representing the closer settlement of this area in the early twentieth century. It is a fine early twentieth century house retaining most of its original features and set in gardens overlooking the Parramatta River in a prominent location adjacent to the wharf and part of the important Drummoyne Avenue streetscape and one of the few surviving waterfront properties that retains house, setting and garden and waterfront features.

Construction years: 1906-1906
The upper railings of the north-east verandah have been removed and replaced with wrought iron. The exterior of the house is in good condition and the interior is said to be unaltered. The street fence is somewhat unsympathetic. The house is set in the remains of an early 20th century garden with a simple classical sandstone boat shed to the water.
No. 1 Drummoyne Avenue was built about 1906 for Mr Stanley Rea, a dentist. At that time it was called Clovelly.
The boatshed was originally built as the bathing house for Drummoyne House.

The land on the eastern side of the present Victoria Road, north of Lyons Road was subdivided in 1881-2 as Drummoyne Park Estate. Subsequent development included a number of substantial and well detailed Victorian Italianate houses followed by large Federation Arts and Crafts and Federation Queen Anne style housing. Much of the earlier housing was located on sites where elevated land provided good views of the harbour. This late nineteenth century development was reinforced by smaller Federation and Inter-War housing both on the original allotments of the Drummoyne Park Estate and on the subsequent subdivisions of the larger landholdings in the area.

The smaller scale of the early twentieth century housing gives the Conservation Area an underlying consistency of scale, materials and form that highlights the larger houses of the late nineteenth century in the streetscape.

“Interesting Federation house c. 1910. Outstanding complex roof with octagonal cupola at peak and octagonal projection at front. Verandah extends down one side, now partly glassed in at front and fully enclosed on part of side section. Turned timber posts with simple balustrade. Tall brick chimneys painted. Small coloured panes in top half of windows and skylights. Stone fence has lost infill. Minor alterations include window grilles.”[3]

“One of Drummoyne’s landmark properties: 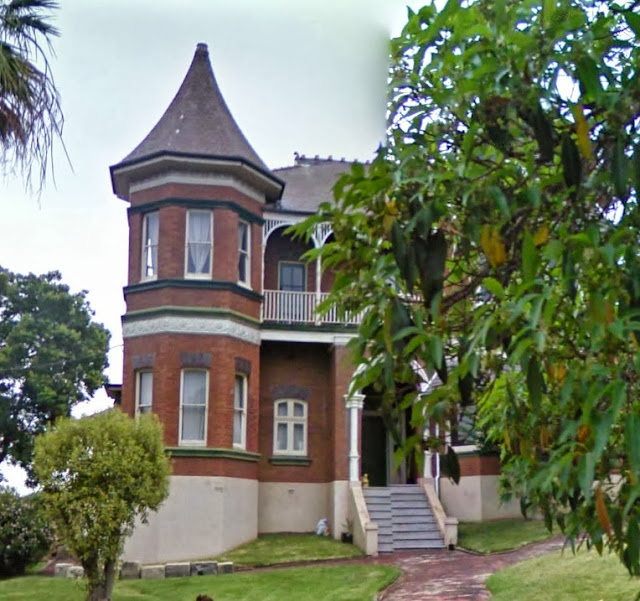 One of Drummoyne’s few grand Federation mansions to survive in its original splendour and setting. Many such buildings in this area were lost to flat development in the 1960s and 70s. One of the most unusual large houses of the period to survive, an outstanding example of major house design in the Council area.[4]

Glendalough’ is a grand late-Victorian manor house of local significance on a majestic 826sqm corner block. The exquisitely restored and sympathetically enhanced residence has remained one of the area’s most distinguished homes for the last half century.[5]

The house is built of face brick on a sandstone base. A verandah wraps around the southern and eastern sides. On the eastern side the verandah is terminated by a projecting gabled front. The roof is bellcast and clad with slate with terracotta ridging. The rear wings have hipped slate roofs in an M form. All the chimneys have survived and are rendered with moulded cornices. French windows open to the verandah. Double hung windows are used elsewhere in the house.[6]
Sold for $3,040,000 in Mar 2006[7]

A very fine example of the Federation style adopting the double L-plan arrangement. The building appears mostly intact and typifies development along the waterfront. 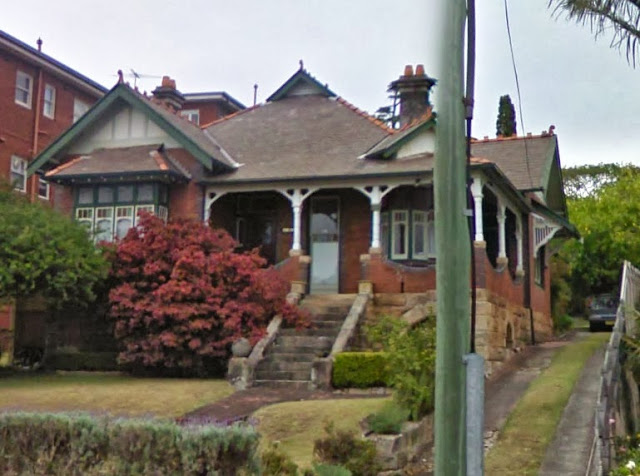 “One of Drummoyne’s landmark residences built c1906, ‘Nairobi’ enjoys a commanding setting affording panoramic unobstructed views across the bay and harbour islands to the Harbour Bridge.”

“Once in a Lifetime – Great Property, Dream Location:
Exquisitely positioned in a picturesque, harbour side enclave of charming Drummoyne homes, this property boasts a harbour view yet is just a short stroll to shops and transport.”

Set on a large block with rear lane access, this home was converted to two flats over 30 years ago. A few original features remain, including lovely stained glass doors, fireplaces and high ceilings.[10]

The subdivision of the Drummoyne House Estate in 1894 created suburban allotments at Wrights Point, Drummoyne. The land around and including Drummoyne House was re-subdivided in 1907 and housing was built facing the water and with its back to Drummoyne House. The present housing at 15-27 Drummoyne Avenue is an intact part of that prestigious sub-division. It is an important element in the

streetscape and the continuous character of Drummoyne Avenue.

This group of housing is from the Federation and Inter-War periods. The group has single storey fronts with high sub-floor spaces taking advantage of the slope of the sites. The four properties at the west end of this group date from the 1907 subdivision.

16 Drummoyne Avenue, Drummoyne, NSW 2047
A magnificant Federation house, c. 1898. It is a large house on a large lot clearly visible above a high paling fence. The complex slate roof incoporates a steepled turret. The house is brick with extensive timberwork around windows and other features. The windows incorporate multi-coloured panes. The entry gate is of special note. The house featues two story verandahs on three sides and shows a marked Queen Anne influence. The main outlook is to the harbour.

Also on the property is a notable Federation period timber fence and gates. The house is set in a general period garden layout with palms, camphor laurels, and magnolia tree all of considerable beauty.

A well detailed Federation house with some additions to the waterside, located on a high stone retaining wall to the lower street. The house features shingled gables, projecting bay windows, rough cast walls and some leadlight windows.[11]

“On one of Drummoyne’s most prized locations, this exceptional home “Harbron” is set on 777sqm of prized land and enjoys widespread City, harbour & Bridge views.

Graced with timeless elegance and exceptionally spacious living & entertaining spaces. This historic residence is peacefully surrounded by an enchanting private garden retreat and only moments to the Rivercat, City Buses, Drummoyne shops & the fashionable Birkenhead.”[12]

The Marlborough and Tavistock Streets Drummoyne Conservation Area is of significance for its largely intact early twentieth century residential development. The group has an overall homogeneity due to consistent use of materials, scale, setbacks and forms. Groups of speculative development also contribute to the regular rhythms in the streetscape.
The character of the Marlborough and Tavistock Streets Conservation Area is defined by:

The housing in the Conservation Area is predominantly of c.1910 to 1930 construction. It has a consistent character dominated by single storey housing of dark face brick, terracotta and slate roofing, hipped and gabled roof forms and front verandahs.

The terrace of seven houses at 113-125 Thompson Street, Drummoyne is a very rare building form in Drummoyne. This is one of only two Federation period terraces in the Canada Bay Council area and is a strong form in the Thompson Street streetscape and illustrates one of the major stages of Drummoyne’s development.
This small group comprises a row of single level terrace style housing with narrow frontages and matching facades. They have a strong Federation Queen Anne character.