A Tale of Two Queenslanders

Both these Queenslanders are of timber construction, with wide balconies, to get maximum cooling breezes and minimum heat retention at night.

Going, going, hold: what the G20 means for auctions

The G20 is forcing some agents to cancel their open homes and delay auctions, while others are planning to seize on the opportunity.
Domain Group figures show there are slightly less homes scheduled to go under the hammer this weekend, with 100 properties across Brisbane up for grabs.

While some auctions have been delayed by a week, others have been pushed forward to midweek.

Kevin Rudd zips out of Brisbane

Former Prime Minister Kevin Rudd and his wife Therese Rein are selling up in their beloved Brisbane suburb of Norman Park.

“That’s because it’s a pretty special home and it’s a hard one to price,” Mr Altrass said.

Mr Altass said they were selling because they planned to use their luxury house near Noosa on the Sunshine Coast as their base in Australia.

A look inside Kevin Rudd’s home

Have you ever wanted to live inside a property of one of Australia’s former Prime Ministers or most powerful men?

The central gablets and symmetrical frontage are a Victorian/Colonial style of arrangement, not ‘picturesque’,and the filigree decoration of the balconies is NOT Art Nouveau. However the gablet finials are Federation style.

The transom window above the verandah door is not leadlight glass or of Art Nouveau style, however the ventilation gap above the bedroom door is Art Nouveau, setting the construction date in the 1890s.

The verandah frieze is geometric in style, and the rafters do not end under the eaves

The kitchen window cabinets could well be original

The timber floor is part of the Queenslander style

Time now for another growing family to enjoy these wide wraparound, north east facing verandas in this lush, tropical setting.
Tucked away and extremely private, this really is the ideal inner city oasis and classic colonial entertainer. 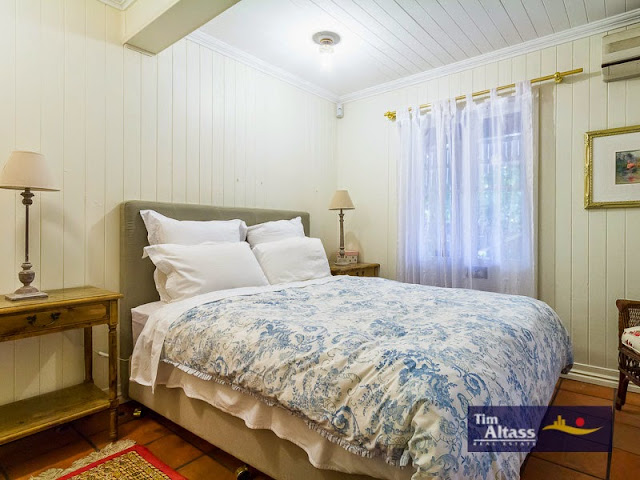 A look inside Kevin Rudd’s home

Former PM Kevin Rudd. Photo: Andrew Meares
On 802 square metres the two-storey property with north-east-facing verandahs is surrounded by tropical gardens.
It had been home to the former prime minister and his wife Therese Rein for more than 20 years, with the couple buying the home for $384,000 in 1994.
It has a distinctive Australian flavour, featuring yellow and green facade detailings, and a kangaroo and emu emblem.