Characteristics of a Mansion

Mansions usually have specially designed rooms meant to accommodate leisure activities of a particular kind.
Federation mansions usually had a large billiards room, and earlier large homes had a ballroom as well.

Is a Mansion a Trophy Home?

Yes, although while a Trophy Home may be a luxury house, and be a desirable, highly priced residence, it may have only 3 or 4 bedrooms, so is not a mansion.

Mansion construction in the 19th century was built in the Victorian period, and these are the majority of Australian mansions.
The early Tasmanian and Victorian farming successes, and then the successful gold mining of the 1870s, allowed the building of earlier grand houses, and later ‘Boom’ architectural design of many magnificent houses in Victoria and New South Wales.

Babworth House was built between 1912 and 1915 for Sir Samuel Hordern, a fourth generation member of the family that founded the Anthony Hordern stores. Sir Samuel was a well-known and influential member of Sydney society.

This photo shows Belltrees homestead in the Hunter Valley.

In 1907 at the peak of the wool production era, H.L. White built the 52 room BelltreesHomestead.

Seven generations of the White family have called Belltrees home since Merino-wool pioneer James White purchased the property on the banks of the Hunter River in 1853.

The original Colonial homestead is now a museum containing cast-iron farm implements made by the property’s blacksmith, historic photos, crockery and domestic accoutrement from 160 years of life at Belltrees, which is still a working cattle farm.

The original grant was made in 1810 and extended in 1815. It is constructed from brick and has a romantic silhouette of turrets, chimney stacks, gables, arched verandas and projecting bays.

John Horbury Hunt designed Camelot for James White of Cranebrook in the late 1880’s, built in 1888.

Caves House is an icon of Blue Mountains accommodation.

Considerable changes have been made to the buildings over the years, but today Caves House is rightly regarded as one of the finest large guest houses still functioning as tourist accommodation.

“Caves House itself was designed to appeal to the sophisticated, financially comfortable element of society, the intellectual and the curious.

Within Caves House, there are 3 main types of guestrooms :

Curzon Hall completed 1899, is of historical significance as one of the last built of the grand gentlemens’ villas of the Ryde district, and as the residence of entrepreneur Harry Smith and his family from 1899-1921.

Curzon Hall is also of historical siginficance for its operation as a Catholic seminary from 1922-1982, and as a well-known wedding reception/function centre since 1983.

This 1920s heritage home was restored in 2008, with close attention paid to the period details. The grand formal living and dining rooms retain their original features.

The word cottage is a bit of an understatement for this nine-bedroom, seven bathroom home in Sydney’s Darling Point. 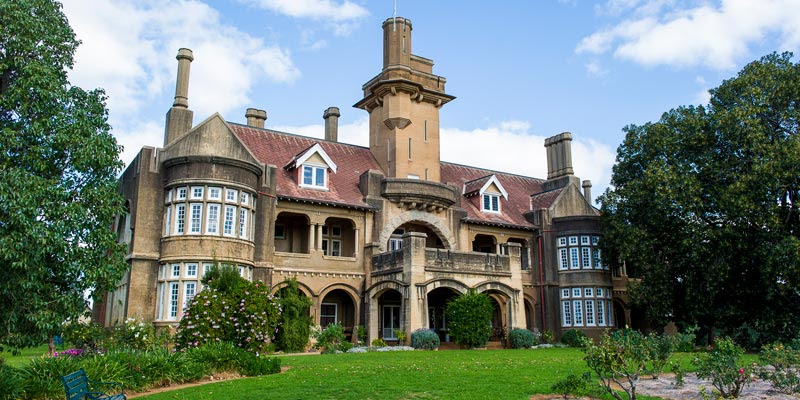 Iandra Station and Mount Oriel Homestead, known as Iandra Castle, was established by George Henry Greene from 1878-1911 and is a rare example of a complete ‘English Manor’ style estate.

The Bellevue Hill trophy residence Leura sold on Monday afternoon 10-Nov-2015 for more than $30 million, setting a suburb record in the process.

Built in 1891 for Mr Tom Knox, brother of Edward William Knox, adjoining ‘Rona’ and probably by the same architect, G A Morrell.[1]

A large and unusual Federation mansion of considerable architectural interest which contributes greatly to the character of the area. The house is a local landmark, in original condition and retains its original curtilage
Lynton is one of the district’s most admired true Federation mansions enjoying a commanding elevated position, and set on a sweeping 90x 225ft or 2134m² landscaped grounds with two street frontage. 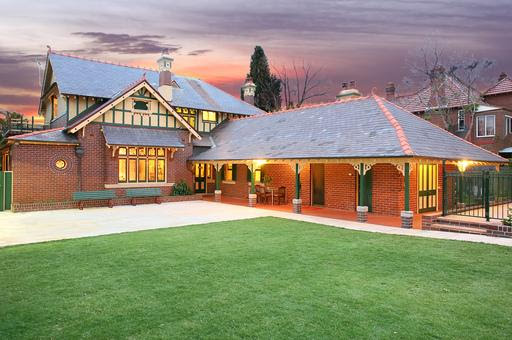 Lynton was designed for Arthur Hezlett by architect Stanley Rickard in 1906.

The grandeur of this setting was quite deliberately achieved with the house capturing so well the architectural qualities of the time. The most distinctive feature of this house is its picturesque roofline.

When Lynton was purchased by an Alderman of Burwood in 1985, the building was converted for use as a reception centre. In the process of conversion the removal of walls between the major rooms took place. It was at the time in derelict condition. The owner subsequently restored the house.

A Federation mansion and garden prominently sited in large grounds on the apex of a long ridge with commanding views
of the surrounding countryside, including across the valley to ‘neighbouring’ mansion Mount Errington.

West Maling has a high level of aesthetic significance at a state level as one of the purest examples of the Queen Anne style of architecture existing today and it is thought to be the first of its type of residence built in Australia.

It was built in 1889 for Albert Bythesea Weigall, the first headmaster of Sydney Grammar School. (Branch Managers Report to the Heritage Council 24 August 1983)

The original garden was set out during the Federation period and from the beautiful wrought iron carriage gates set between pillars a privet hedge extended along Penshurst Avenue. Some of this had to be removed in 1983 to allow builders access to build the underground chapel and avoid damaging these gates (Davis, 1983, 119).

Yarralumla and Surrounds, including Government House, gardens and grounds, dates from the nineteenth century and is historically highly significant.

The original Mowatt farmhouse of c.1832 was a three-roomed stone building, with a verandah and French windows. Other buildings nearby contained the kitchen and other facilities, and there were farm outbuildings as well. 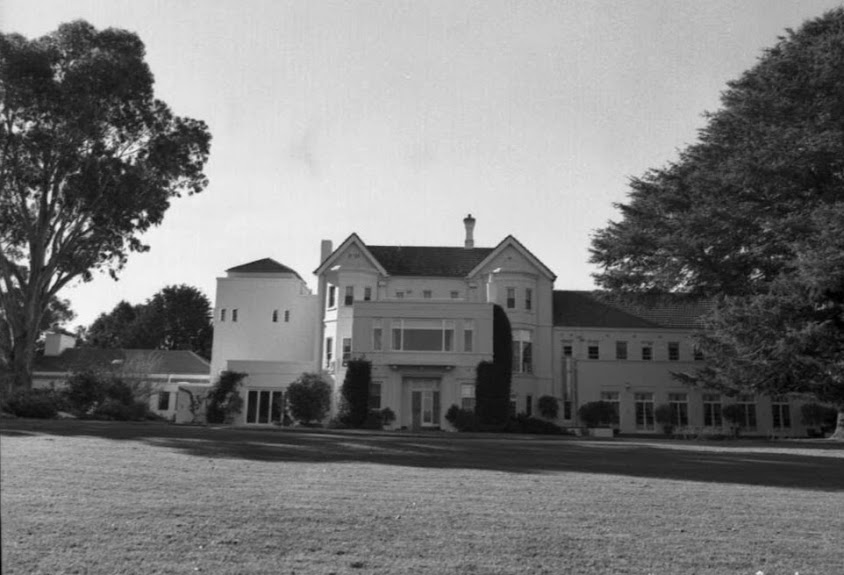 Following the Commonwealth’s takeover of Yarralumla, a new wing and other additions and alterations were built in preparation for use by the Governor General.

The new works at Yarralumla, costing a massive 72,000 pounds, included a private entrance between the 1891 bays, a three storey addition and other buildings.

In 1939 more refurbishment and redecoration was undertaken, in anticipation of the arrival of the Duke of Kent as Governor General.

Built in 1907, this historic home on 1518sqm of land is in the heart of Brisbane’s New Farm and boasts 30.2m of street frontage to Elystan Rd.

Architecturally significant, a good example of an architect designed home, basically Queen Anne Revival in style, with wide verandahs as a concession to the local climate.

Carrick Hill is important because the grand mansion, set amidst a large park, continues the elite and park-like traditions of Springfield. 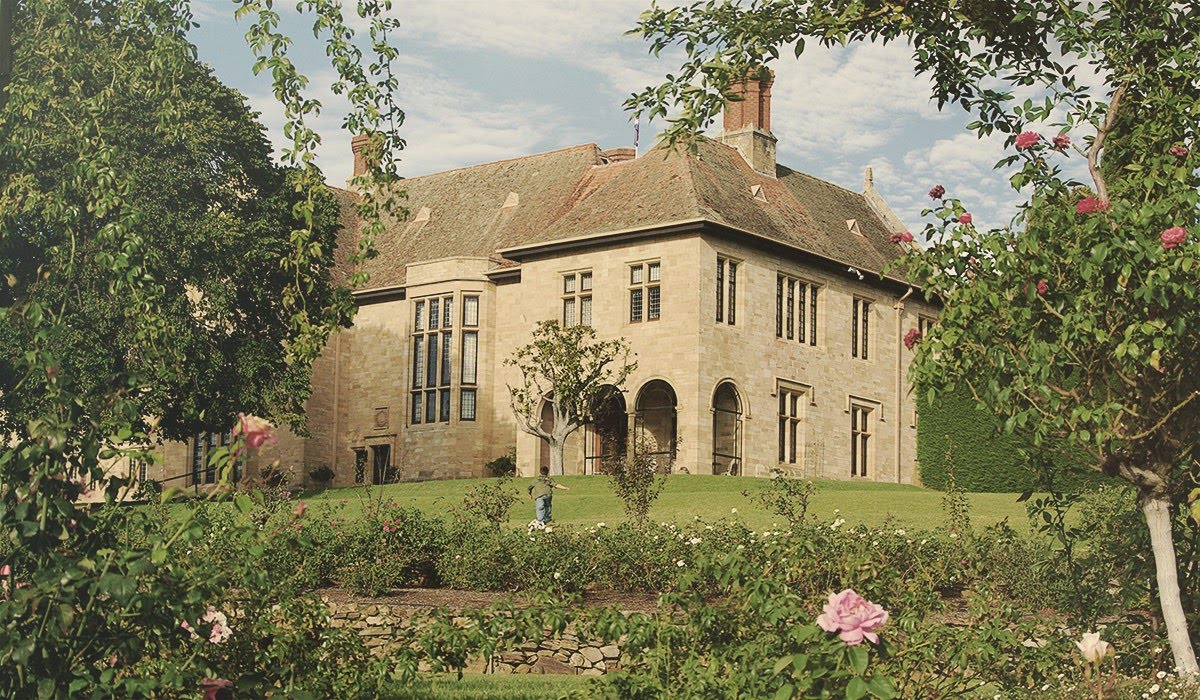