Some of our great Federation period gardens

I am told that most Federation style gardens have been redesigned or sold off for extra housing! Hopefully not!

Here I am going to try to point to good Federation style gardens, gardeners and garden designers of that period.

Bedding is still in style but architects begin to show an interest in the context of their creations recommending built garden features such as gateways, pavilions, terrace steps, and walls (Fig. 33). These are to be planted with “old fashioned” flowers and trees such as apple, pear, and native trees, surrounded by a mixture of daffodils, yellow tulip, larkspur, bellflower, bachelor button, monkshood, white poppy, white phlox, bleeding heart, briar rose, and peony. Clumps of shrubs are spaced along property lines.

Around 1890 foundation plantings of mixed evergreen and deciduous shrubs are sometimes recommended, but the idea of hiding the foundation does not take off until after WWI and does not become common until the 1930s.

In the front yard round flowerbeds planted with cannas, caster bean, elephant ears, with coleus and dusty miller edging, are positioned opposite windows, for ease of viewing. Flowers for cutting are planted in the back yard and include china asters, zinnias, stock, and sweet pea. Gardeners avoid the bedding shapes planted in primary colors of earlier Victorian gardens, and showy flowers such as magenta dahlias.

Compared with the rigid style of the Victorians, Edwardian gardeners favoured a more relaxed look, with naturalistic planting inside a strongly structured framework.

Key features were hedges, terraces, sunken gardens, pergolas and arrow-straight paths adorned with informal planting to disguise their geometry. It was a style that barely changed until World War II.

But it was gardening guru Gertrude Jekyll (1843-1932) who really popularised this style, which is often referred to as ‘country garden’ yet is more a description of the garden’s atmosphere than of its location.

Jonathan Chancellor and Margie Blok | 5 September 2014 for PropertyObserver
“Built 1887 for Samuel Hordern, Retford Park is well known for its association with many breeds of livestock imported to Australia and developed there by the Hordern family. The house is a fine example of a Victorian mansion with gardens.”

Acknowledged as one of the great country gardens of Australia, this magnificent garden was part of the Australia’s Open Garden Scheme for many years.

Under the proposal, the 29-hectare eastern part of the estate has been subdivided into rural-inspired lots ranging from 8,000 square metres to four hectares lots.

The philanthropic former chairman of the ailing publishing company that bears his family name, first advised he would bequeath Retford Park for the benefit of the public in an article written by me in 2009 in the Sydney Morning Herald. It was his idea for at least three decades.
Retford Park has been the country home of the arts patron since he paid £15,000 in 1964 for it on a then four-hectare holding.
Retford Park, with an Italianate revival-style mansion, dates back to the 1880s when it was the summer retreat of the retailing Hordern family.

Fairfax, the eldest son of the late Sir Warwick Fairfax and his first wife, Betty Wilson, then set about regularly buying adjoining rural land.
He also set about enlivening the house.

Colour photos courtesy of Highlife Magazine, which reports on life in the Southern Highlands of Australia.

The award-winning five-acre garden is featured in many books and magazines on Australian gardening.

During her career Walling’s style changed very little, yet each of her garden designs is individual.

At the same time Walling was working on the garden, the Ashtons commissioned architect Professor Leslie Wilkinson to redesign the homestead. This unique partnership of Walling and Wilkinson has never been repeated.

It was Geoff Ashton (one of four sons of James Ashton who built the original homestead) and his wife, Janet, who hired Walling and Wilkinson. For the past three decades, their son, also named Geoff, and his wife Mary, have maintained the garden, homestead and property.

Although Walling’s outline of the garden has changed little, the existing beds have been replanted and developed under the skillful guidance of Mary Ashton. She and her husband took the reins at Markdale in 1983 during one of the worst droughts in recorded history. Sadly, many plants in the garden died during that drought.

Mary took a careful and considered approach to the garden before developing layers of thick planting in beds and borders beside the stone pathways leading to various garden areas which provide a different view from each direction.

Source: Markdale.com.
But the Markdale garden is as much about the use of space and architecture as it is about planting.

About two and a half hours drive from Sydney, Markdale is a must see for people with a passion for gardens.
And at the property, the Ashton family offer self-catered bed and breakfast accommodation for up to 24 people in two original 1850s stone houses and shearers quarters.

“Considered by many to be the greatest garden in Australia”
Set apart in its own secluded hilltop woodland estate of more than 300 acres just east of Bowral in the beautiful Southern Highlands of New South Wales, Milton Park Country House Hotel & Spa is now a five star hotel. 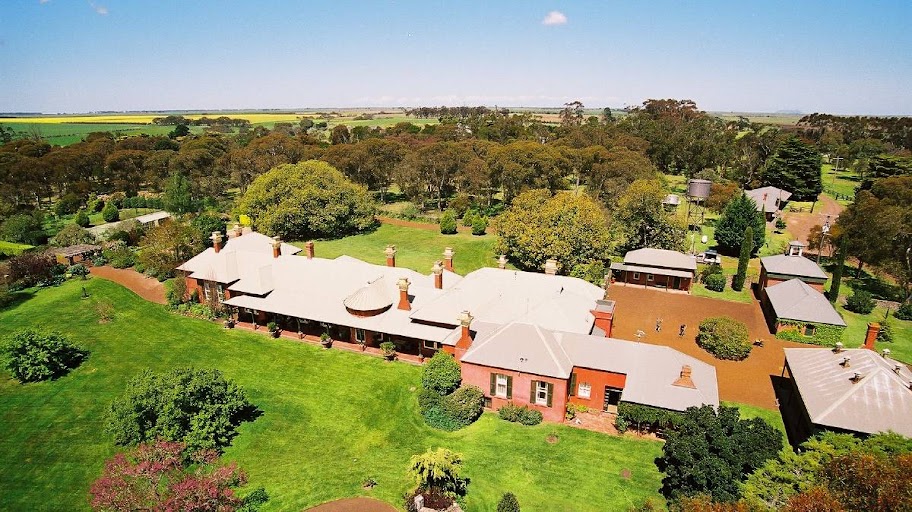 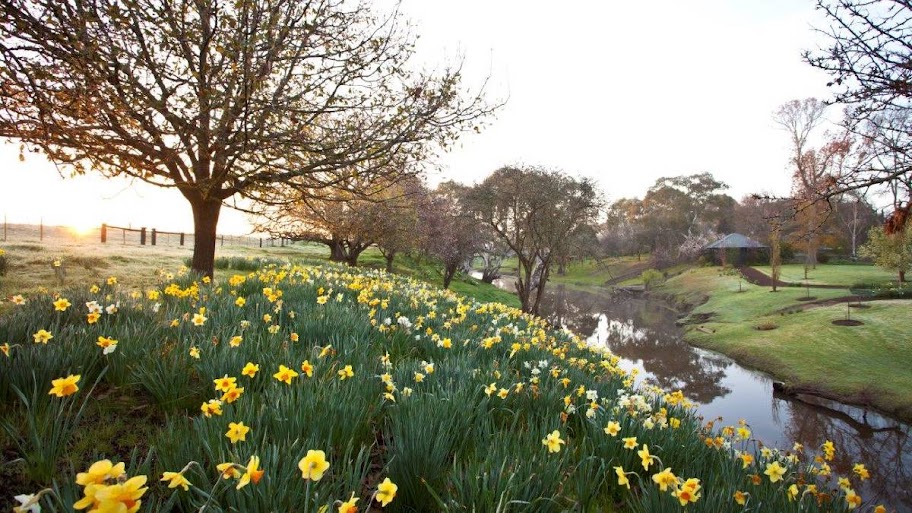 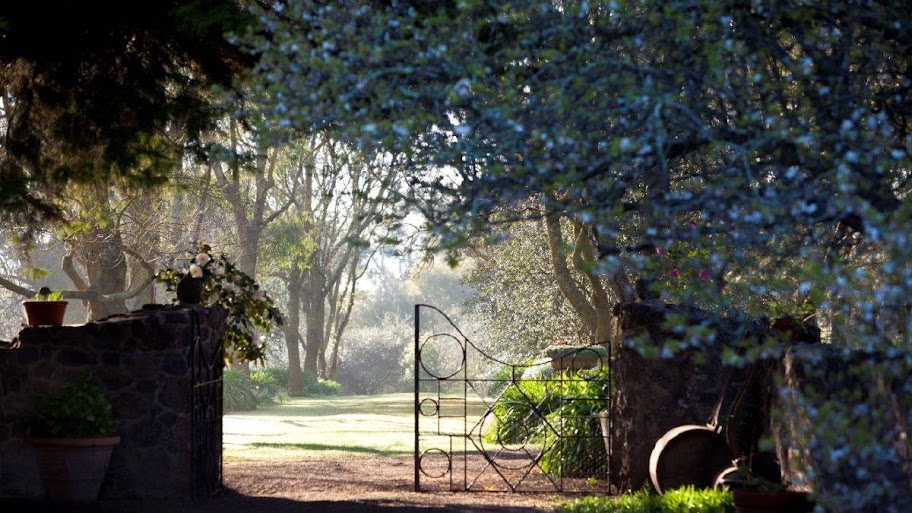 Banongill Station has a long history. It is situated in the heart of the Western District in the area first discovered by Major Mitchell and settled in the 1830’s.

The Banongill garden surrounds the main homestead of a large rural property. It is over 14 acres in size and has the distinction of being only one of a handful of gardens designed by 19th century landscape designer William Guilfoyle. 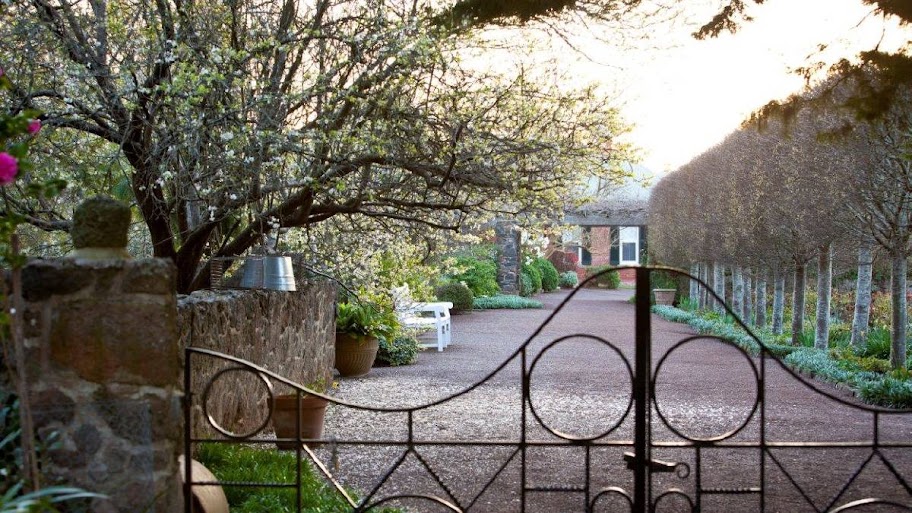 This is only part of the garden. Meandering paths along daffodil strewn slopes, the vast bluestone terraces filled with magnificent spring bulbs, an immense wisteria covered pergola, a hidden grotto, a wild garden festooned with blossoms and bulbs in spring and formal vegetable gardens and orchards. A beautiful bluestone seat is a new addition to the wild garden built, by Michael Sturgeon, and an excellent place to enjoy a coffee.

The Banongill Garden, like many other in the Skipton District was extensively damaged by the flood waters from the Emu Creek in September 2010 and January 2011.

The wild garden is the most changed since the floods. Many trees were washed away from the banks and many others were damaged and needed to be removed. The gardeners removed loads of debris from the main garden in the great clean up. The Garden is still a beautiful place to visit and the vistas and daffodils are as lovely as ever. The Garden is continually evolving and we like others are beholder to nature.
The garden you see now is the culmination of nearly 100 years of dedication and care by all previous owners to Guilfoyle’s early vision.

The gardens on the stamps are: 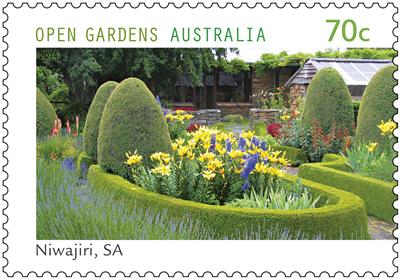 Steve Hailstone developed Niwajiri in the Adelaide Hills in the late 1980s. Displaying European, Japanese and Australian influences, Niwajiri has been meticulously planned and planted.

“We want life here at Niwajiri to be: 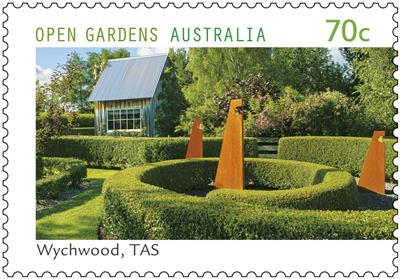 The garden at Wychwood, at the foot of the Great Western Tiers in northern Tasmania, is one of the world’s most magical places. Wychwood combines Scandinavian design sensibilities with temperate-climate country-garden charm.

And to top it off, the idyllic Mole Creek, which is home to brown trout and a platypus, runs through the back of the property.
Wychwood commemorates a garden
over 22 years in the making, brought to life by a very special family who dreamt of the simple life in Tasmania.

The book details the evolution of the garden from bare paddock to world-class attraction, with its iconic labyrinth, espaliered fruit trees, naturalistic planted beds and curved, clipped lawns. It gives the reader insight into the techniques and secrets that make the design of this garden so successful, offering inspiration and encouragement at every turn, and for every level of gardener.
Peter Cooper’s beautiful and haunting photography captures how the garden has transformed with the changing seasons and settled into its surroundings.
Get the book ‘Wychwood’;
Published by Murdoch Books and available in Australia and UK in all good bookshops.

Edna Walling designed over 300 gardens between 1920 and 1960 when most women were homemakers. Today her gardens are still considered to add value to real estate. Her achievements and the gardens themselves are acclaimed.