These are the only Federation era Heritage Gardens that are listed as Heritage in all of Australia.

The Bunyas is a fine example of an Arts and Crafts Bungalow that, not withstanding the extent of distortion of its form through the addition of the ‘western wing’ is substantially intact in both its external and internal fitments and elements. Its primary significance is, however, its direct association with Richard Stanton, the progenitor of Haberfield, and as the major extant work of its architect, John Spencer-Stansfield. (Greg Patch, 6 December 2004) 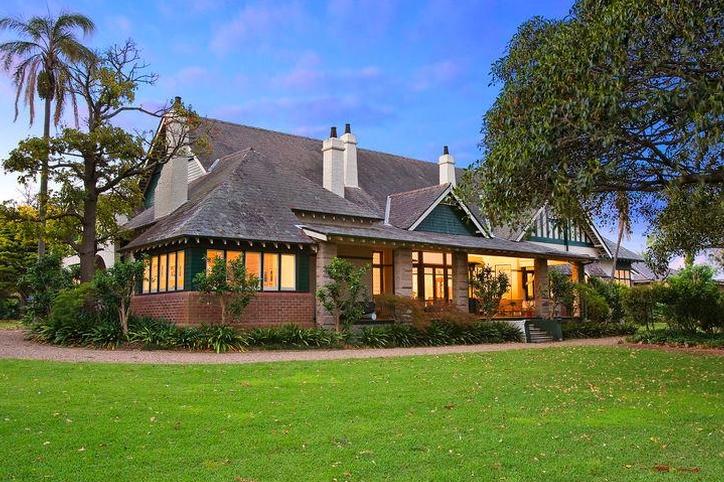 A substantial and largely intact house in the then modern Arts & Crafts style, being the only 2 storey house built in the Federation Garden Suburb of Haberfield. Historical associations with Richard Stanton, the builder of the Garden Suburb. (National Trust of Australia (NSW), 1982).

The garden at the Bunyas has been wholly designed and all the little incidentals of its management governed by a woman. Today there is a decidedly pleasing and quite romantic intermingling of the garden of 50 years ago and the garden of more modern times. In one portion there is a gnarled and twisted nearly century old ivy vine (Hedera sp.) once the entrance to the old homestead of John Ramsay, who was the estate’s original owner (Dobroyde House/estate). It is one of the most treasured things in the garden and receives unremitting care and attention. The carefully kept grass covered walks and drives too, are somewhat of an innovation in a time when one invariably sees gravel covered walks. These grass-covered walks certainly add to the beauty and freshness of home surroundings (Home & Garden Beautiful, 1913, 145). 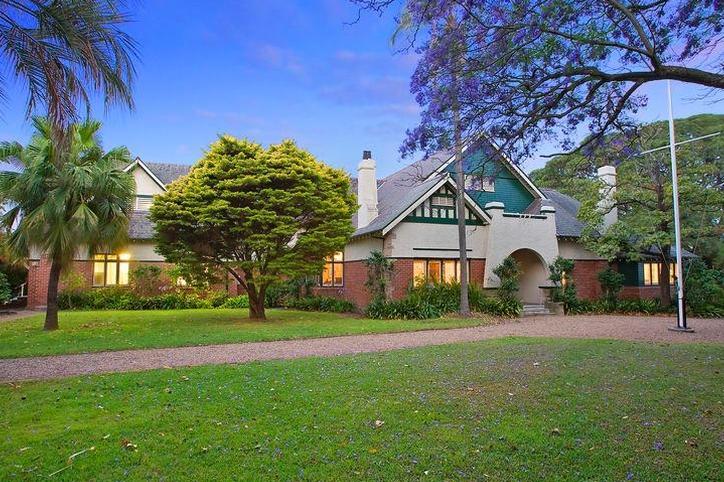 A serpentine path leads from front gate to front entrance porch, flanked by beds of shrubs and with two specimen fan palms (Washingtonia sp.) and a NZ cabbage tree (Cordyline australis) specimen on the lawn. 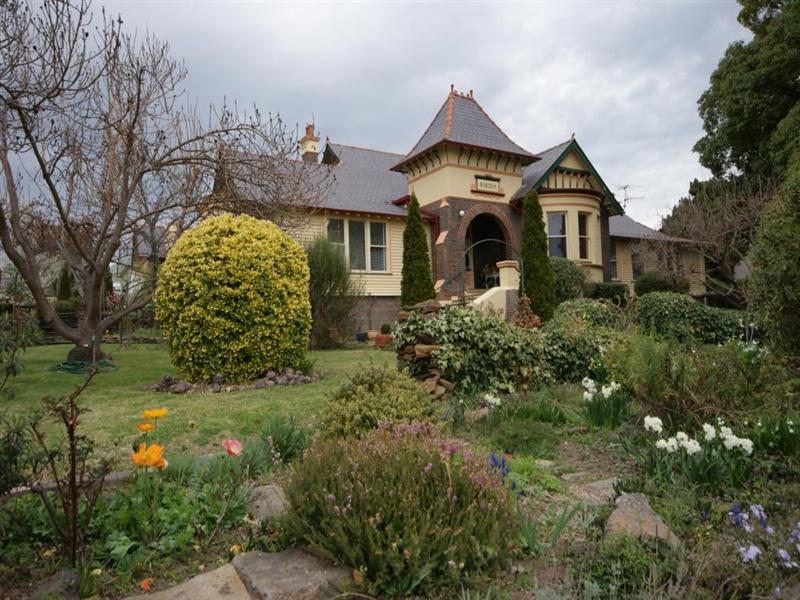 Probably the best of Armidale City’s surviving Federation houses. Most attractive example of the period, displaying an Arts and Crafts influence. Some outstanding detailing. Despite some unsympathetic alterations remains essentially intact. 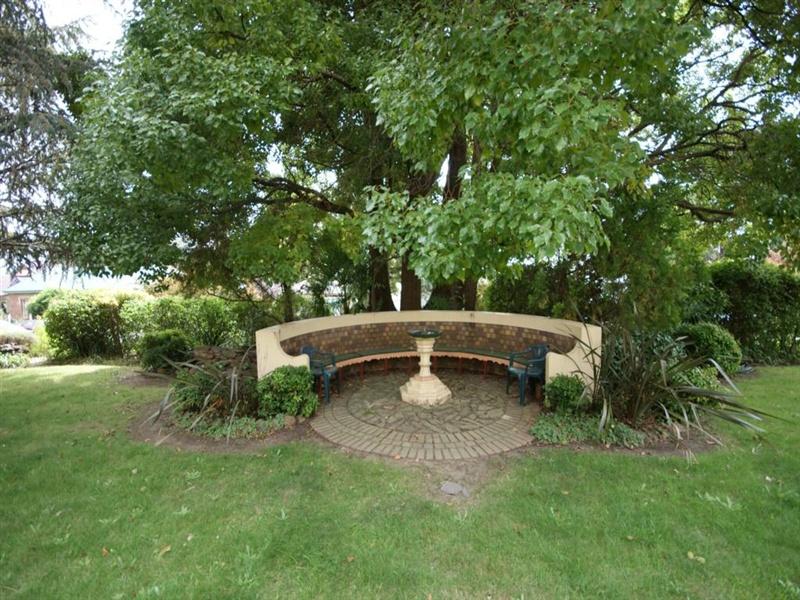 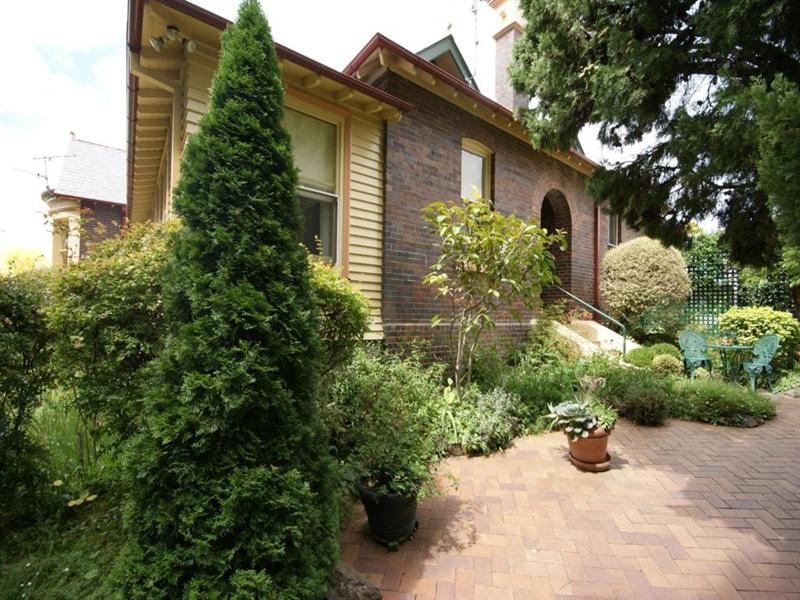 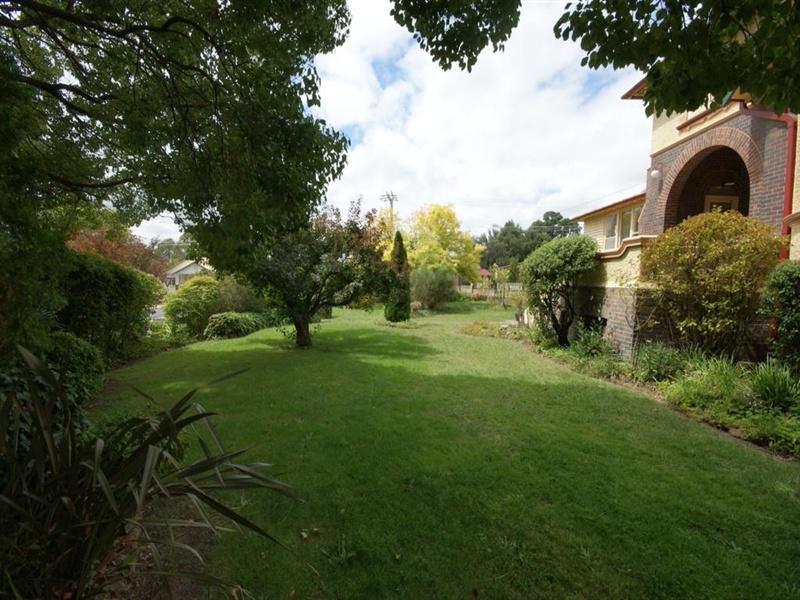 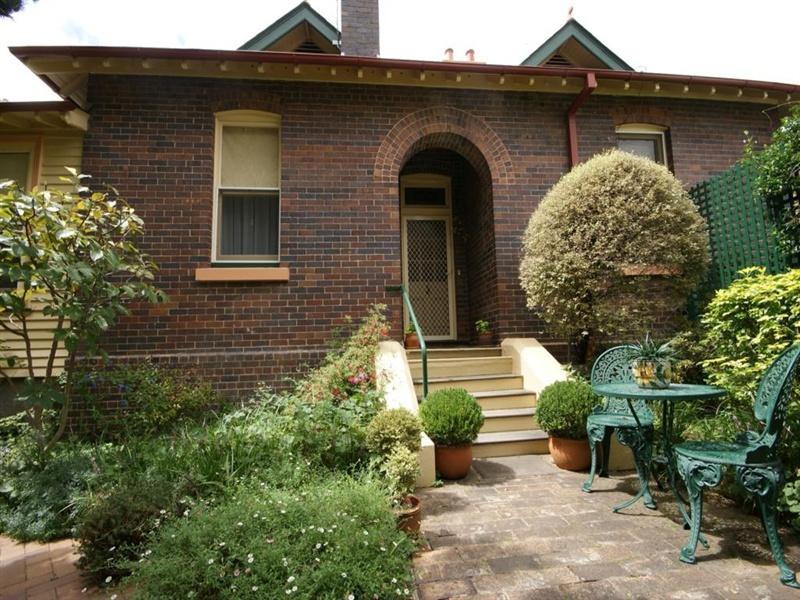 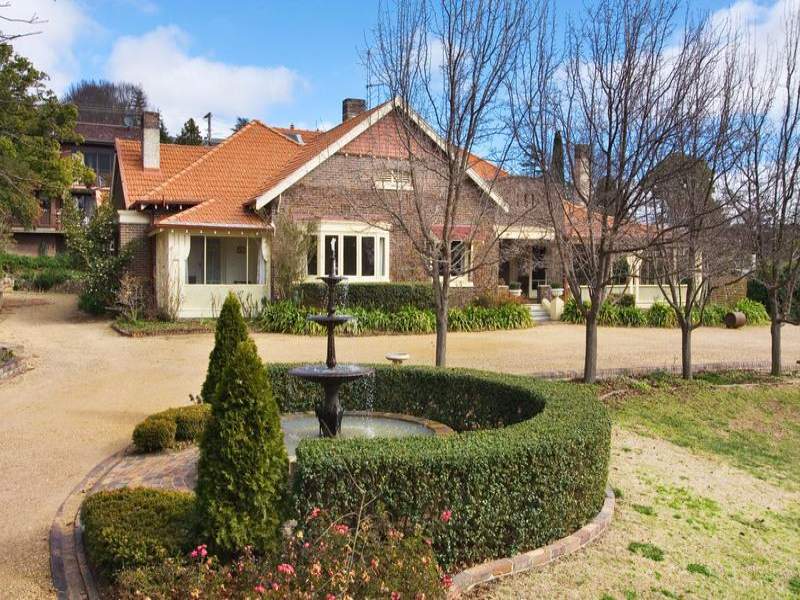 Uloola garden is a large town residence garden established 1908-10, of the Federation Garden style. It is important for as an excellent example of a Federation Mixed Garden style which is demonstrated by S-shaped paths, flower beds in geometric shapes, sloping lawns, herbacious borders, three garden entrances, a picturesque image enhanced by foundation planting, use of flowers in particular roses for colour, and a selection of exotic trees for seasonal display). 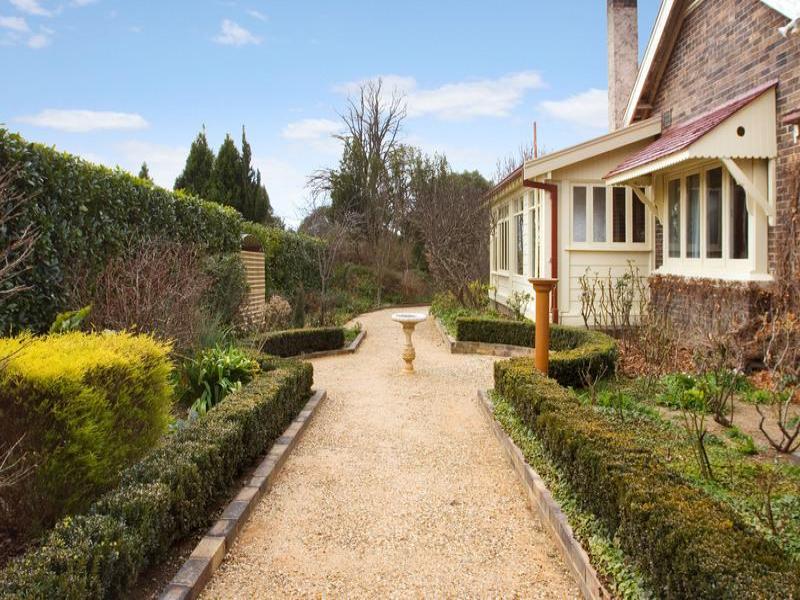 The garden demonstrates a high standard of design skills by the balance of spaces, shrubs and flower beds, integrated with the natural land slope, and providing a suitable setting for the House.
The garden is on a large corner block sloping westward and overlooking the centre of Armidale. A broad curving brick edged gravel path diagonally crosses the block and curves back along the terrace before the house. 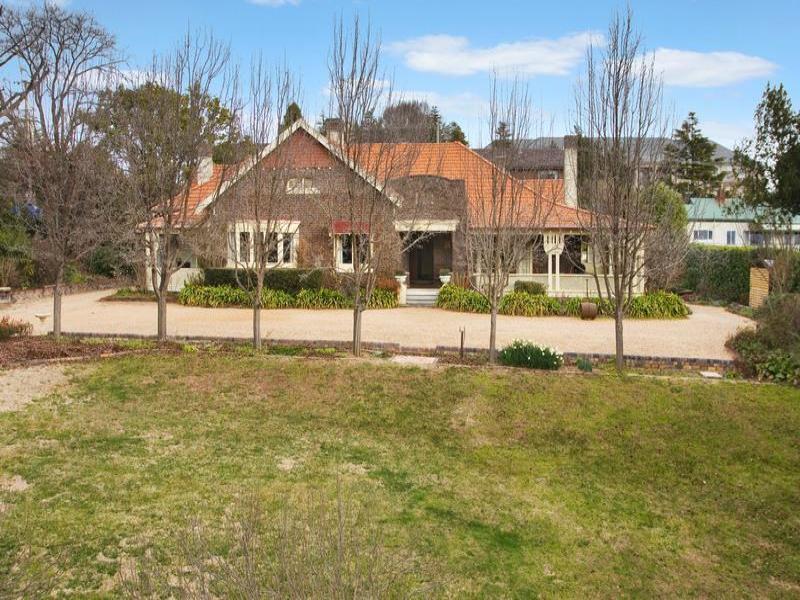 The street frontages are hedged with cherry laurel and planted thickly with trees and shrubs (pin oaks, liquidamber and prunus). Curved beds of roses and herbaceous plants border the drive and handsome contemporaty wooden gates begin it. The walking path which joins the drive begins at the corner of the block. The house was constructed in 1908 by a builder named Leckie for Mr Slade, and the garden was established by 1910. 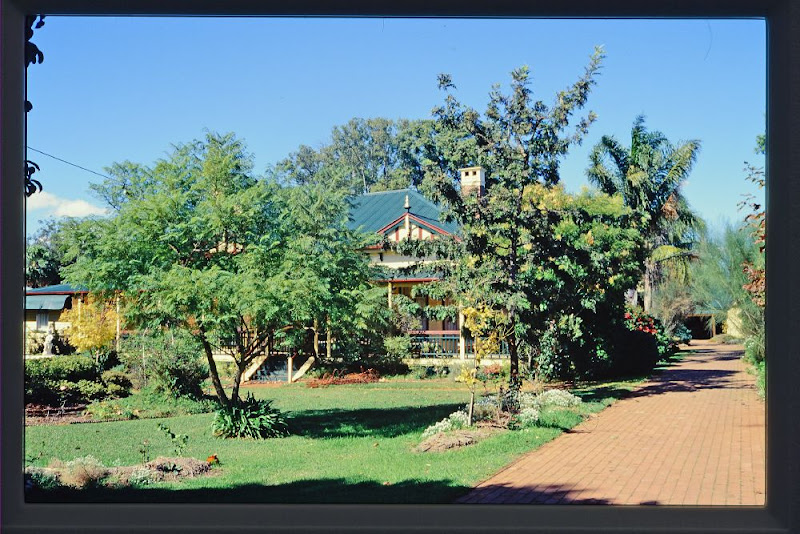 Elphin is a heritage-listed villa at 24 Anzac Avenue, Newtown, Queensland, Australia. It was built from 1907 to 1907. It was added to the Queensland Heritage Register on 28 July 2000.[1] Elphin was the large home of a wealthy pastoralist, Andrew Crombie. and home and business premises of a bottle merchant, used as flats and is again a home, demonstrates the changing usages of residential properties. 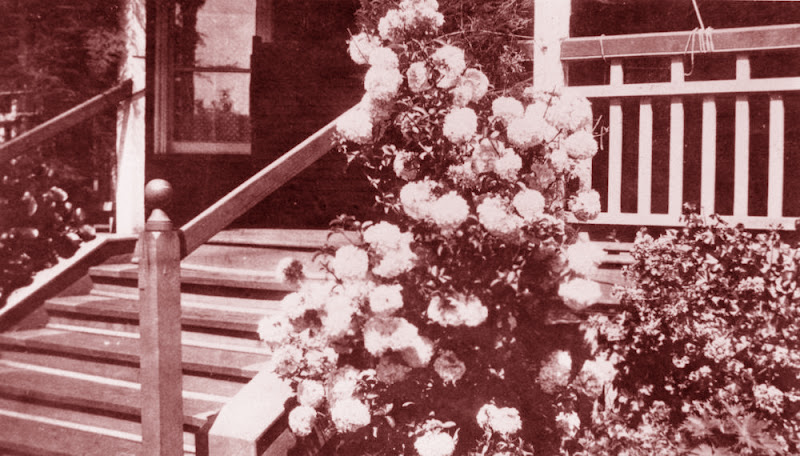 Elphin is an excellent example of a large low-set timber house designed by prominent Toowoomba architect William Hodgen in 1907 for Andrew Crombie. 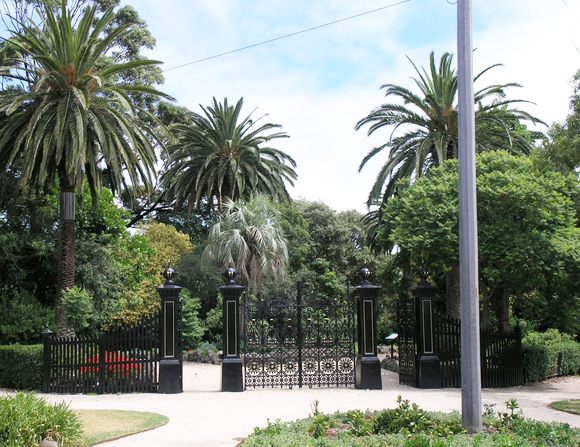 The Williamstown Botanic Gardens of 4 hectares was permanently reserved in 1856 as a public park and botanic garden. The creation of the gardens was largely due to the efforts of the citizens of Williamstown who lobbied the Williamstown Council to persuade the State Government to set aside the land and then contributed to its early development through the donation of plants. Plants were also donated by Ferdinand von Mueller, first Director of the Royal Botanic Gardens and Daniel Bunce, first curator of the Geelong Botanic Gardens.

The Gardens have scientific (horticultural) significance for their collection of plants, particularly the dominating palm and conifer themes and the large quantity of plants remaining from the Edwardian and Victorian periods.

The Gardens are socially important for their long and continuous relationship with the citizens of Williamstown, who were largely responsible for their creation and early development and who continue to use them as a place of recreation. 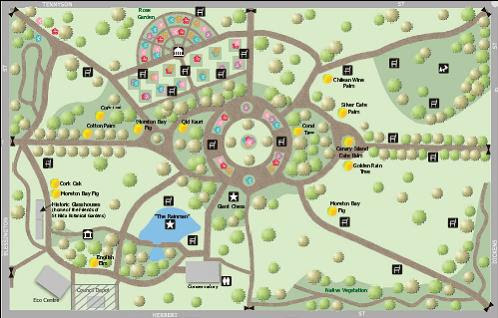 The site of the St Kilda Botanical Gardens were established in the 1800’s. The municipal council petitioned the Department of Lands and Survey to make this segment of land bordered by Dickens Street, Tennyson Street and Blessington Street a Botanic Garden.

The gardens were formally established in 1859 when a boundary fence was erected. By 1907 significant donations of money and plant material had led to the establishment of a rosary, extensive flower beds and a nursery.

Exotic forest trees were planted during the 1870s and Australian species were included in 1932.

“Something wonderful has happened to the roses in the Alister Clarke Rose Garden in the St Kilda Botanical Gardens. Well, it is wonderful to me. Some lovely person has identified these roses and now they have name plaques.(Melbourne Places website)”

The St Kilda Botanical Gardens of 6.4 hectares were permanently reserved in August 1860. The original formal or geometric design for the Gardens was prepared by Tilman Gloystein c1860 and despite many alterations, particularly between 1940-45, it retains elements of the original layout and early features. The principal source of plants for the establishment of the gardens was the Royal Botanic Gardens under the directorship of Ferdinand von Mueller. Mueller appears to have assisted in the supervision of planting and attended the opening ceremony. The Gardens? first curator was well known nurseryman, George Brunning. The Gardens contain striking landscape features which remain intact from the Victorian, Edwardian and Inter-war periods, in particular the Blessington Street gates (1918) and St Kilda City Gardens gates (c1950), the Levi Pavilion, a hexagonal timber pavilion built as a gift from the Levi family (1928), the central north-south axial avenues between Blessington and Dickens Streets (c1860), including the unusual alternating palm avenue, and the central crescent shrubberies and bedding displays. Striking axial vistas are achieved through the central axis which survives unaltered from the period of the Gardens? original layout (1860). The Gardens also contain the Alister Clark Memorial Rose Garden (1950, redeveloped 1985).
How is it significant?

St Kilda Botanical Gardens are of historical, aesthetic, scientific (horticultural) and social significance to the State of Victoria.

Why is it significant?
The St Kilda Botanical Gardens have historical significance as one of Victoria?s earliest botanical gardens and along with Williamstown, as one of only two suburban botanic gardens established in the 19th century in Victoria. They also have historical significance as one of the few surviving formally designed botanical gardens in Victoria. The Gardens are also significant for their strong early associations with Ferdinand von Mueller and early nurseryman George Brunning.

The St Kilda Botanical Gardens have aesthetic significance for their fine design featuring an axial plan with avenues leading to a circular centrepiece. The brick gutters and bluestone rock edges reinforce the intricate design. This central area is a fine example of formal Victorian garden layout with its circular lawn and surrounding beds of floral displays and is a rare feature in Victoria. The palm avenue, an unusual combination of Phoenix canariensis and Washingtonia robusta, and the ornamental cast iron gates provide a striking and dramatic entry to the Gardens from Blessington Street. The Gardens are also significant for the built and vegetation features which survive from the Victorian, Edwardian and Inter-war periods.
The Gardens have scientific (horticultural) significance for their unusually large collection of rare and unusual mature trees and for their role in perpetuating the tradition of Edwardian municipal gardening displays. The Gardens have an outstanding collection of mature trees, some of which are rare in cultivation and some the finest of their species in Victoria. Such trees include Ulmus pumila which is extremely rare in cultivation in Victoria, a pair of Cassine crocea, Phillyrea latifolia, Olea europea subsp. africana, Celtis occidentalis and an important collection of palms, including the rare Jubaea chilensis and Phoenix sylvestris.