Gallery of Federation Arts and Crafts Houses in Sydney

The Federation Arts and Craft style had its origins in England, where architects were reacting to the impersonal nature of the Industrial Revolution.

In nineteenth-century England… William Morris, (was the) father of the Arts and Crafts movement. Dismayed by the effects of the Industrial Revolution and inspired by Ruskin, Morris tried to put art into a broadly based social context through the reestablishment of handicraft methods reminiscent of a rural, pre-industrial age.

In the United States, Gustav Stickleypromoted the ‘Craftsman’ image in architecture, interior design and furniture.

Glyn was designed by architect Rodney Alsop in 1908 for the wealthy financier, pastoralist and politician Sir Edward Miller (1848-1932). The house was constructed in the Arts and Crafts idiom, with reinforced concrete walls, finished with a distinctive render with white quartz pebbles pushed into the surface, resting on a deep brick plinth. This render finish has subsequently been painted over. It was complemented by gables and steeply sloping roof slopes with all surfaces clad in terracotta shingles. The interior contains many distinctive features, particularly timber panelling, carved woodwork, stained glass and beaten metal ornamentation. The building was positioned at the top of a hill on a succession of terraces and towered above the extensive grounds as they sloped down to a gully on the south east side.

Glyn exhibits all the classic aspects of the Arts & Crafts movement emphasising picturesque massing, references to vernacular architecture and the exposure of building materials and textures.

The original fireplaces, light fittings, switch plates and joinery were rare examples of English Arts and Crafts influence in Australia, although some of these features have since been lost. Each room has a different decorative treatment. An interesting Australian touch is the eucalypt decorative scheme in the main hall, stair hall, entrance hall and upstairs gallery.

The Crossways is a fine example of the international design ‘Arts and Crafts Movement style’ , a house of historical significance that was designed by Waterhouse and Lake and built in 1908.[12]

Erica, 21 the Appian Way, is the most unusual house in the estate. Also known as the Hoskins Estate, Appian Way was a model housing estate conceived by a wealthy industrialist, George J. Hoskins on 8 hectares of land that he purchased at the start of the 20th century.[2] Built between 1903 and 1911, the estate of 36 Federation houses was created with his designer and builder William Richards to present an appropriate setting opposite the Hoskins St Cloud mansion on Burwood Road.[3]

Erica has all external walls finished in roughcast render except for the shingles in the gable ends. The roof is slate, and the verandah roof is supported on tapered, sleekly rounded brick piers. An elongated tapering chimney springs from an extraordinary stepped parapet which slices asymmetircally across the smaller of the two gables facing the street. In the windows, small rectangular panes of convex glass are set in lead cames. Erica shows its Arts and Crafts flavour through the use of roughcast render, slate on the roof and Voysey-esque treatement of the chimneys. [3]

In Australia, Federation Arts and Crafts Buildings are domestic in scale and make free use of traditional (usually English) motifs to achieve an unassuming, homely, well-established character.

One of the key design and architecture styles of the 19th and early 20th centuries.

Typical Federation features in Australia are: 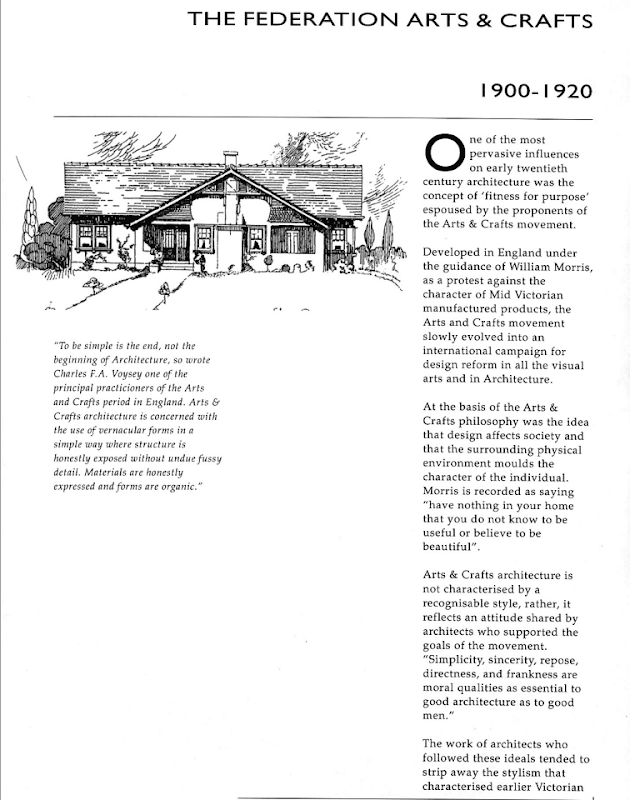 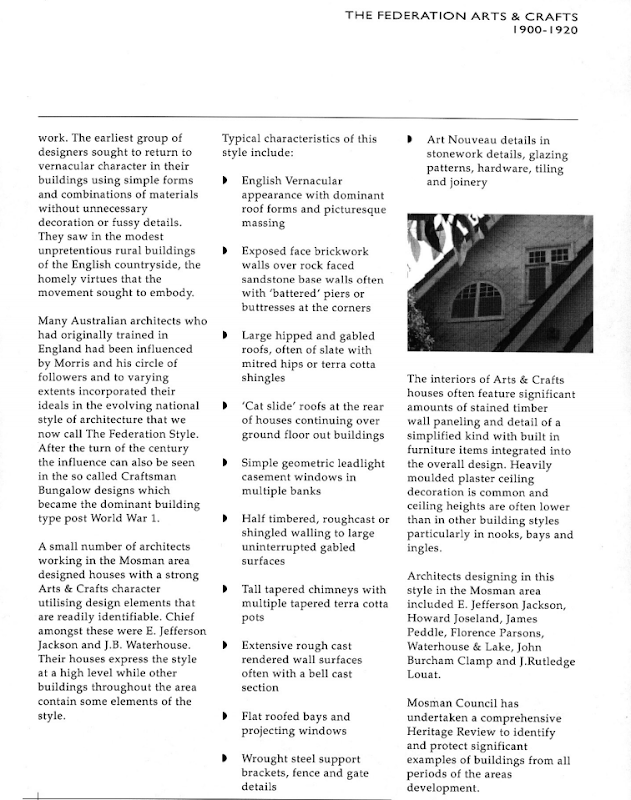 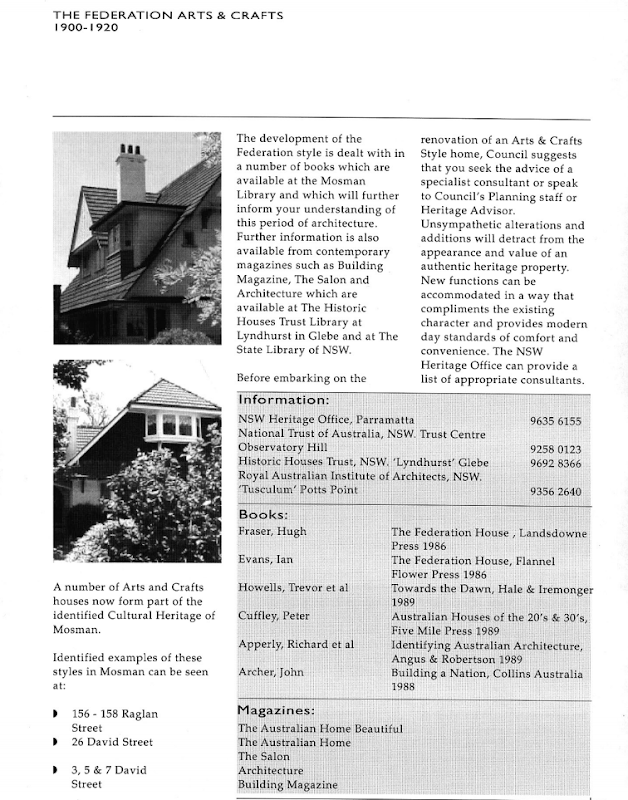