Casterton is an agricultural town located on the Glenelg River in far western Victoria, about 40km from the South Australian border. It was settled from the 1840s in order to service the agricultural economy, a function still important today. Casterton derives its name for the Roman word meaning ’walled city’, due to the lush green hills which surround the town.[1] 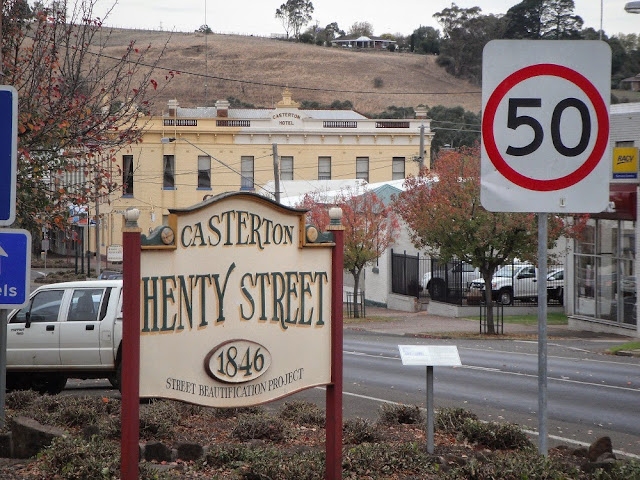 The first white explorers to pass through the area were the expedition led by Major Thomas Mitchell in 1836 who spoke enthusiastically of the landscape’s green hills, soft soils and flowery plains, describing it as ideal for farming and settlement, naming it Australia Felix.[3] The first white settlers in the area were the Henty brothers who had landed in Portland, Victoria in 1834 and who claimed 28,000 hectares between what are now the towns of Casterton and Coleraine. ‘Warrock’ Station, a sheep farming settlement, was established in 1841, 26 km north of what would be Casterton.[4]

The township of Casterton began on the crossing site of the Glenelg River, the location having been surveyed in 1840, and the first pub, the Glenelg Inn, was established in 1846 with a post-office opening the following year. 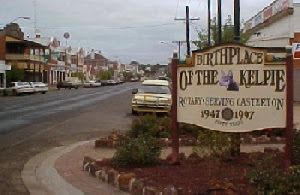 working dog. The first pup of the breed was born at the sheep station in the 1870s. Casterton is now known as “Kelpie Country” in honour of the working dog’s birth.

Floods and fires have also been very much part of the district’s history. Although there had been previous floods, it was the devastating flood of 1906, which led to a number of rebuilding changes in Casterton.
The Albion Hotel, built in 1865 by the brothers Robert and George Grant, was a simple, single-storey, solid brick building with a wonderful symmetry of design. After the flood the Grant family demolished the original Hotel and replaced it with a far grander building. Erected with Queen Anne architecture, of massive size, and with the same beautiful symmetry as the original building, it was regarded as a showpiece in Western Victoria.

The flood of 1946 is remembered as ‘The Big Flood’ of the Sandford and Casterton areas and it was reported that 628 points of rain fell in four days.