The area was first settled in the late 1830s. The Boroondara Roads Board, the first municipal authority, was set up in the 1850s and covered a remarkably similar area to the present City of Boroondara. Boroondara is an aboriginal word reputed to mean place of shade.

The name Hawthorn, gazetted in 1840 as “Hawthorne”, is thought to have originated from a conversation involving Charles La Trobe, who commented that the native shrubs looked like flowering Hawthorn bushes.

The municipality of Hawthorn (1860-1994) was bounded by the two river valleys, Burke Road on its east and Barkers Road on its north.
The Hawthorn township reserve was surveyed in 1837. It was immediately east of the Yarra River where Church Street meets Burwood Road. Farm-size allotments were also surveyed in Hawthorn in 1843 and sold during that decade. The township site is readily recognised by the Gothic Revival Christ Church (1853) and the Hawthorn primary school (1853) north of Burwood Road. On the south side of Burwood Road, on a knoll overlooking a bend in the Yarra River, is “Invergowrie” (1852), a homestead situated on land which was later subdivided by the theatrical entrepreneur, George Coppin, in 1871.[2]

“Believe it or not, there once was a time when Hawthorn was considered by the Melbourne establishment to be akin to what Melburnians consider Templestowe to be like now: garish faux-mansions in an out-of-the-way location.

The Grace Park Estate was formed from several lots purchased by Michael or Julia Lynch between 1846-47, forming grounds to Grace Park House, constructed by them before 1858.

In the twentieth century, the character set by the earlier development was reinforced with Queen Anne and Garden Bungalow designs often by architect/developer Christopher Cowper.

The Grace Park and Hawthorn Grove Precincts, Hawthorn, are of heritage significance for the following reasons:

After the separation of Victoria from the mother colony of New South Wales and the beginning of the gold-rush era in 1851, the price of colonial land dropped and, as a consequence, there was an increased demand for Hawthorn allotments by eager speculators.
From Radical Terrace , 18 February 2013[6]

At the turn of the century, Harcourt Street offered a unique pocket of grand Victorian living. Unlike Toorak, where large estates still existed unfettered and with hefty distances between them, Harcourt Street provided its residents with a unified streetscape of imposing, but consistent housing stock.

According to the aforementioned Hawthorn Heritage Study:

The St James Park Estate off Shakespeare Grove in Hawthorn East is likely the only extant comparable for Harcourt Street’s homes size and vintage. This is a prestigious residential area, situated on the crest and steeply sloping sides of a hill above a bend in the Yarra River. It contains many large detached residences constructed in the 1870s and 1880s. 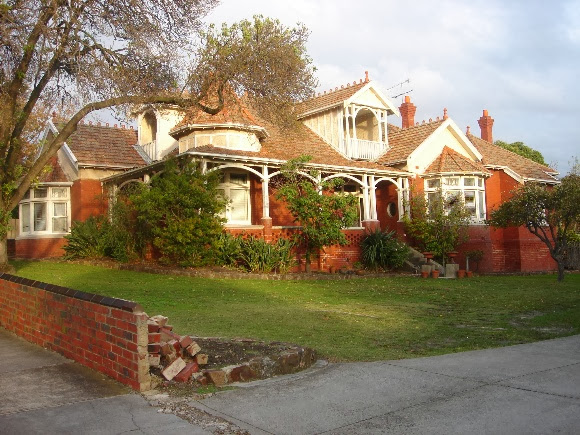 The house is a fine, representative and broadly externally intact example of a substantial and prominent late Federation villa on a large allotment. Historically, it dates from a period in the early twentieth century when subdivision of the large Rae family nineteenth century estate occurred. It also takes advantage of its double allotment, with wings and bays projecting to two elevations. If somewhat conservative for its period, the dwelling nevertheless exemplifies the major characteristics of the style: the return verandah, turret element at the verandah turn, complex roofscape with dormer balconies and anchoring of the verandah with projecting wings.

The house at 20 Rae Street, Hawthorn, is a substantial, brick, attic-storey late Federation-era villa which is massed and planned around a return verandah flanked by two perpendicular projecting wings, side entrance and corner octagonal tower and turret. 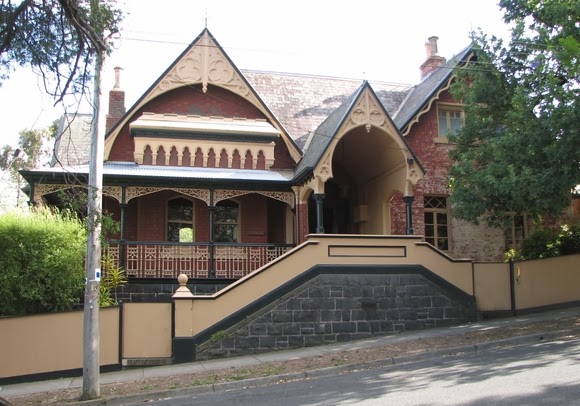 Alloarmo is an example of the Victorian Rustic Gothic style in the detailing to gables with decorative timber barge boards and gable ends.

Construction of the house now known as Alloarmo commenced in c.1856. Another two sections were added in c.1895 and again in the 1930s or 1940s. The original section was built in brick, with an attic and cellar, and was constructed in the Simple Gothic Revival style with a steeply pitched slate roof and decorated bargeboards.

A large and late example amongst the best of the buildings constructed in the second development period at Grace Park which incorporates many standard design Grace Park features.[10]

Grounds and Interior of Lenoma: 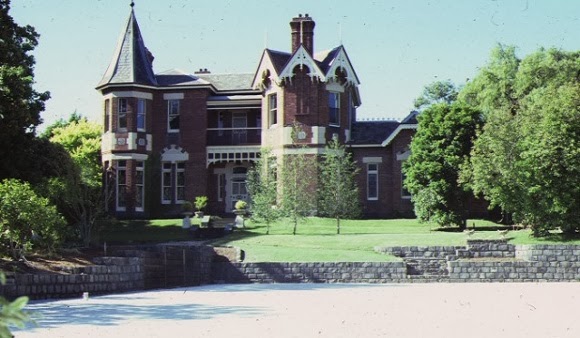 Rotha was designed by the notable nineteenth century architect John Beswicke as his own residence. The house, built in 1887, is two-storey red-brick and includes design features which anticipate the Australian Queen Anne style popularised at the turn of the century.[11]

Views and Interior of Rotha:

The St. James Park Estate, Hawthorn, is an area of heritage significance for the following reasons: 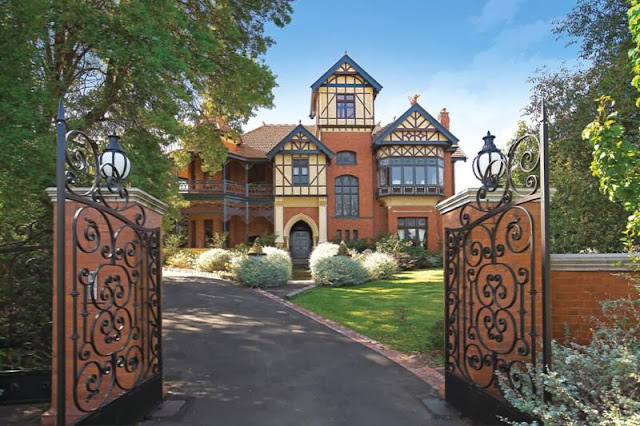 One of Melbourne’s most stunning period homes. The grand estates, substantially set back on large blocks on the north side of prestigious Harcourt Street, are offered to the market extremely rarely. Designed by renowned 19th century architect, John Beswicke, Number 1 Harcourt Street represents the finest example of Federation Queen Anne design, both externally – with its spectacular red-brick façade, and internally – with incomparable plasterwork, stained glass windows and elaborate fireplace mantles. 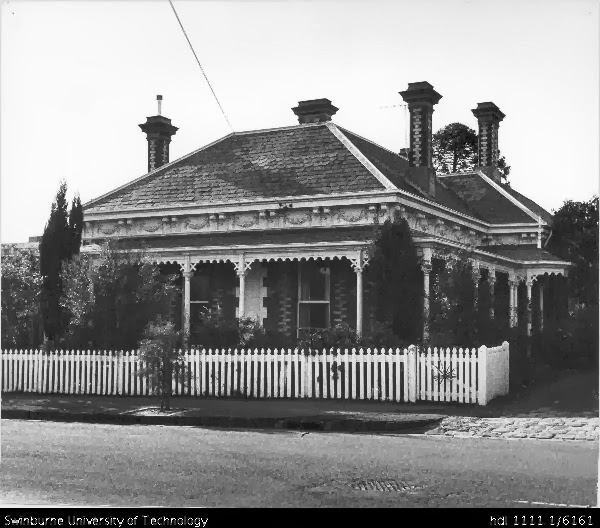 Tantallon, 79 Oxley Rd, Hawthorn
Tantallon, built in 1894 and displaying elements of Federation Queen Anne style, is significant on account of its high degree of elaborate decoration to the exterior. The residence is notable also for its very unusual cantilevered side verandah roof over the main door 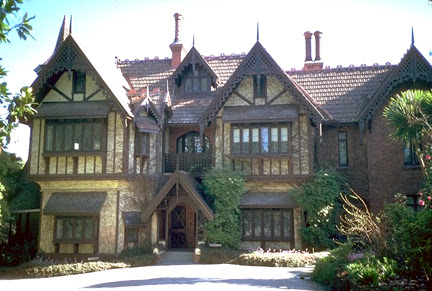 Tay Creggan in Hawthorn is a magnificent example of the Federation Queen Anne style of architecture. 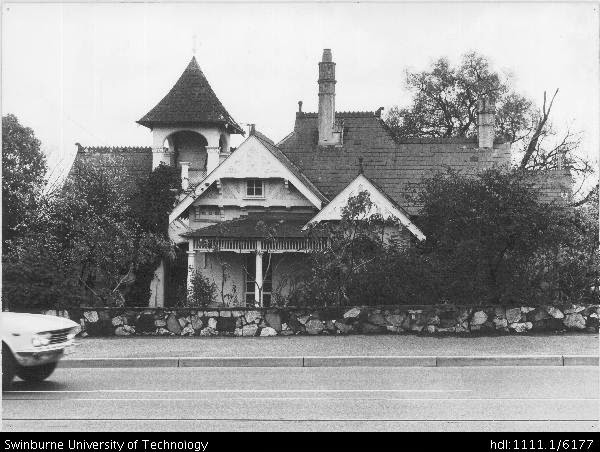 1099 Burke Road, HAWTHORN EAST
A particularly unusual villa design from the turn of the century. The second storey on this house is a recent addition. The ground floor as it faces Burke Road is primarily the 1899 design. This is purposefully asymmetrical.

The 1860s section of this house is the oldest remaining in the Village of Rathmines. It was a local landmark and is used as a reference point in Burke Road for many other properties. 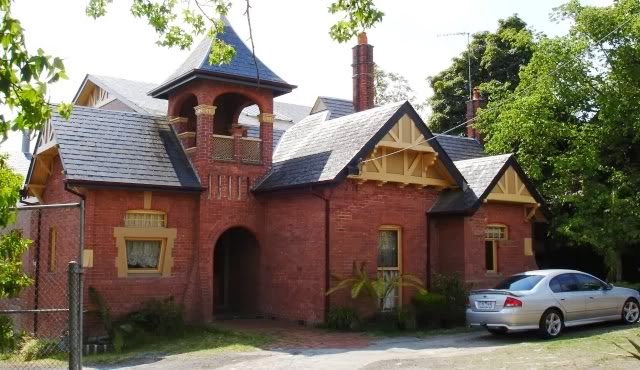 ‘Yarroma’, located at 12 Coppin Grove in Hawthorn’s uber prestigious St James Park Estate, has listed once again. This time, the c1871 James Conlan-designed mansion comes with a refreshed interior, a “new” master bedroom, and seemingly more subdued pricing expectations: $10m+, if Domain is to be trusted. The mansion’s new listing struck us for two reasons: 1) any home in the St James Park Estate holds a certain kind of staying power unrepeatable even in the most blue-blooded pockets of Toorak; and 2) when any home undergoes a base-level interior refurbishment after failing to sell, it signals to the Radical Terrace a certain kind of interior design demand en vogue at the top end of the market. [14]