Source: This work is almost wholly derived from the STATELY HOMES: THE MIRROR AND METAPHOR OF COLONIAL SOUTH AUSTRALIA, Volume 3, House Profiles by Doctor Robert M. Stone, to whom I am very grateful.

1890-1891. Encouraged by Sir Edward Stirling, John Bagot built Forest Lodge, a Gothic mansion designed by Ernest Bayer
HERITAGE LISTING: Local heritage listing. A submission is currently being prepared for both the house and gardens to be added to the State Heritage Register.

The main garden is a good example of late Victorian garden design, while the lower part is an excellent example of an Italian vista. In addition, the extensive collection of conifers was in 1943 pronounced by Mr Lane Poole (Canberra Conservator of Natural Forests) to be the most complete public or private collection in Australia.

Garden: The large Victorian garden is integral to the original building complex. The garden was planned by William Austin Horn and head gardener George Sparrow, laid out around the house , reputedly in the style of Baron Ferdinand Von Mueller. The gardens remain substantially as laid out, as recorded in a painting by W Tibbets of 1897, however they have become more heavily forested over the years. The garden structure follows the Victorian Romantic style with interconnecting pathways following the contour of the valley beneath the house. The pathways broaden to grassed slopes and a groups of recreational lawns including tennis court, bowling green and croquet lawn. … The garden was planted with camellias, rhododendrons, banks of shrubs and a canopy of exotic trees. The trees which remain today include weeping-elm, magnolia, copper beech, pin oaks and conifers.”[2]

IMPACT ON CULTURAL LANDSCAPE: Wairoa is not only known for its stately home, but also for its heritage listed garden.

The gardens are being restored and are opened to the public on special occasions. (“Volunteer Gardeners are welcome to join us in the Wairoa Garden on Tuesdays between 10am and 5pm. Light lunch provided. Contact Kirsty or Wendy in advance.”)

CURRENT USE: (St) Albyn is currently being renovated (2010).
“A two storey stone and brick dwelling with projecting bay to corner surrounded by verandah and balcony. Facade features terracotta panels in bands. Stone construction with brick quoins, surrounds to windows and doors. Hipped roof clad with corrugated galvanised iron with brick chimneys. Interiorhas been damaged with the removal of fire surrounds and filling of fireplaces and removal of fittings and fixtures. Superb central stairwell and gallery intact.”[3]

IMPACT ON THE CULTURAL LANDSCAPE. Albyn House was the centre of culture in Adelaide and was associated with fine musicians (Warburton, 1981:243). 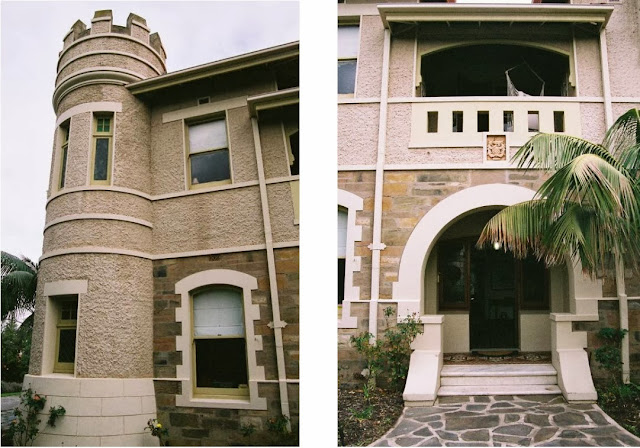 Karrawood is constructed of random coursed, squared blue stone, with brick quoins; brick has also been used extensively for the entrance porch which features a large stained glass window. The north east section of the house appears to be an earlier architectural style; this section is above the cellar.

HISTORY: 1897. Karrawood was built in the late 19th century by Matthew Goode, an important merchant. He had premises in North Adelaide and Grenfell Street, Adelaide.

“Significant as one of Adelaide’s mansions, with an historical association with some of Adelaide’s prominent families. The house itself is of interest as one that incorporates buildings supposedly dating from the 1840s. Within the house some fine quality timbers are used displaying excellent craftsmanship. There is some remaining evidence of the William Morris products that once were used in the house.”

“The suburb of Unley is often associated with magnificent and opulent houses, but just up Cross Road at Urrbrae is a beautiful bluestone mansion that outshines the jewels in Unley’s crown…

HERITAGE LISTING: State Heritage Register, File Nos. 14340; 10644; 10656.
Urrbrae House as it now stands was almost wholly built for Peter Waite in 1890 on the site of the mostly demolished earlier residence. It was probably the first house in SA to have roof tiles and electric light supplied from its own generating plant. Original decor was in the style of William Morris. 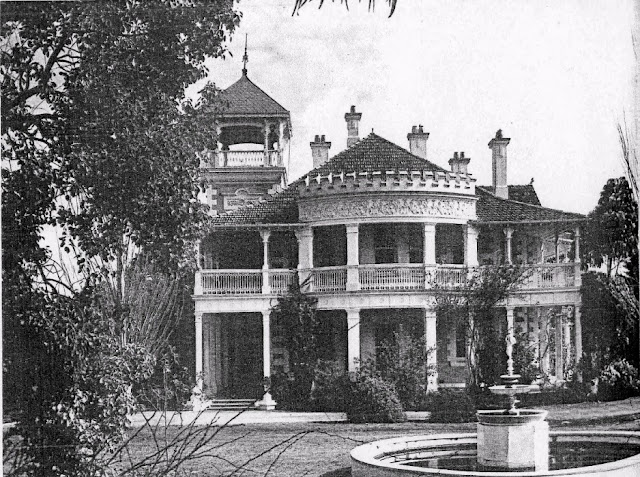 This substantial two-storied house and its neighbour, Taylor House, are important survivors of the redevelopment of Brougham and Palmer Places which occurred around the turn of the 20th century, transforming it into a precinct of grand style and conspicuous wealth.

Roche house is architecturally significant as an excellent example of a large house of the Federation period, during which emphasis was placed on asymmetry, variety of roof form (tiles, gables and projections were common) and quality brick dressing.

HERITAGE LISTING: State Heritage Register, File No. 13460
Dating from 1891-92, St Corantyn is a significant and well preserved example of the work of architect George Klewitz Soward. 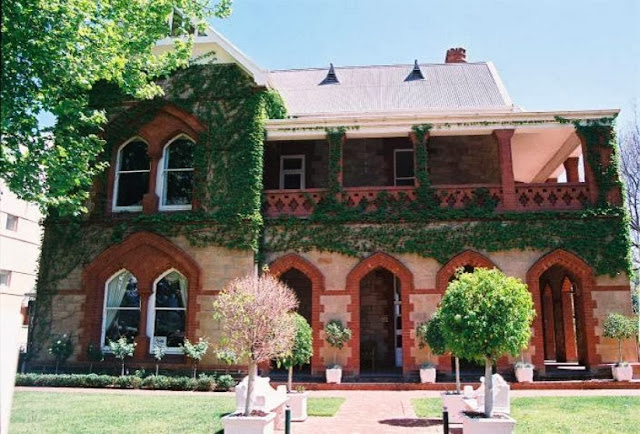