Haberfield, the Garden Suburb of Sydney

When first established in 1901 Haberfield was marketed as the ‘Model Suburb’.

“The present day character of Haberfield was established between 1901 and 1917 with the subdivision and development of the Ramsay Family’s Dobroyde Estate (Ramsay’s Bush) by Richard Stanton.

Haberfield is a good-looking neighbourhood, says McGrath agent Michael Tringali, and one with a rare sense of unity and pride that you don’t always see in other suburbs.

Ray White agent Henriette Masmeyer agrees. “All the streets are wide and tree-lined and what you get now will still be here in another 20 years time,” she says. “The green space Haberfield is hanging on to will be highly prized in years to come.”

When inner westies gather to talk real estate, the subject of Haberfield is often raised. Heads shake and there are mutterings about the ”ridiculous” results, especially when compared with prices back in the day, be that the 1980s, 1990s or 2011.

Examples include the $2.91 million in April for a four-bedder a few doors from Parramatta Road. Or the $2.8 million in December 2011 for an unrenovated four-bedder, with only one bathroom, on Turner Street. And the unrenovated two-bedroom semi on busy Dalhousie Street that sold on the quiet in November for $1.2 million.

McGrath Inner West agent Michael Tringali explains the attraction: ”Consistency of architectural integrity draws a very house-proud demographic who are prepared to stay for the next 15 years to raise their family, while they restore or maintain their home’s Federation character in the knowledge that a two-storey McMansion won’t pop up next door.”

This sentiment has meant the median house price has soared 66 per cent in the past decade, almost double the Sydney-wide growth of 35 per cent. As LJ Hooker Haberfield agent Peter Sotiropoulos says: ”Prices have pretty much doubled every 10 years since our first boom in 1978.”[2]

‘Haberfield espoused the philosophy of the Garden Suburb with its gardens containing distinctive planting, fences, gates and curving tiled paths. Houses in Haberfield were typically ‘detached’ double-brick dwellings situated on their own block of land measuring 50′ x 150′ (15 m x 45 m). No two houses were alike, although there were many common themes throughout the suburb. The roofs were either slate or Marseilles tile. All had front verandahs. Decorative features typically used in this area include leadlight windows depicting Australian flora and fauna, Art Nouveau timber detailing and tuckpointed brickwork. – from: http://www.heritage.nsw.gov.au

The majority of houses in Haberfield are protected under a ‘heritage order’, which is the main reason why so many original Victorian and Federation houses still exist in the area. 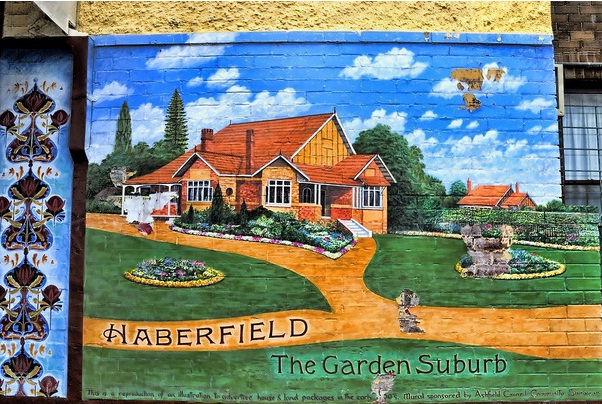 “This visionary social experiment was so financially successful that it helped lock in the great Australian dream of the quarter-acre suburban block with dwelling, which has dominated how Australians seek to house themselves.

“There are many reasons why Haberfield is significant at both a state and national level.

Three of the best in Haberfield

There are in fact two homes on this large, level block, ideal for extended family or guest accommodation. The main residence is a substantial Federation home melding both the Arts and Crafts and Queen Anne styles to create an impressive property retaining plenty of original features.

There is a side driveway to a substantial four-car garage and plenty of lawn for backyard cricket.

If you’ve just done a double-take looking at the photos of the front and rear facades of this property, you’re not the only one. From the street, the facade blends seamlessly with its Federation neighbours, as per heritage orders. But out the back a cutting-edge extension adds a dramatic modern dimension with inclusions for the serious home cook, wine connoisseur and movie or sports buff.

Outside the old and new sit side-by-side: the original stables, ideal as garaging, storage or as a workshop or studio forms the northern boundary of a glass-framed, gas-heated pool.

If you can live with the location on busy Ramsay Road you’ll get more value for your dollar at this renovated family home. The house on the back boundary in Martin Street on a comparable block sold for $1.9 million in 2013. The front two bedrooms of this property face the street and are surprisingly quiet. Each bedroom has a built-in wardrobe, the master with an en suite.