Christopher Cowper was a significant architect in early 20th century Boroondara, best known for his extensive Queen Anne residential development in Grace Park, Hawthorn, as well as many other mid to large‐sized houses for the well‐to‐do residents of Kew and Camberwell, and other suburbs of Melbourne.

The Grace Park Estate was formed from several lots purchased by Michael or Julia Lynch between 1846 and 1847, forming grounds to Grace Park House, constructed before 1858.

A very large Queen Anne house with substantial land coverage to the ground floor and an extensive attic storey. The design addresses both Burke Road and Rathmines Road with prominent gable end treatment and, a strong corner emphasis via a splayed gable to the corner verandah.

The strong Queen Anne character is overlaid by some Art Nouveau inspired embellishment on the verandah valence, verandah balustrade and the cast iron to the fence. The walls are the regulation red brick, embellished only by render string courses. Gable ends are half timbered, the roof is terracotta tiled with particularly fancy ridge capping. The property is enhance by original brick and cast iron fence (recent ripple iron is an addition).

A new building on the corner of Burke and Rathmines Roads was recorded in 1906, the owner being C Goodridge of Wattletree Road, Malvern. The designing architect is unknown.

The architect for the residence has not been determined. It shows some of Christopher Cowper’s design traits, but the complexity of the roof, suggests a different designer. This building is a typical for Queen Anne in its overwhelming emphasis of the corner. The incorporation of the entry here is particularly unusual, as is the small verandah for a hipped roof design type. These changes are a direct response to the prominent corner site and the coverage, the attention to a public address on both frontages, the use of a hedge and the increased garden area achieved by cutting off the corner, have combined to retain a strong sense of the house in a garden setting.

While architect Christopher Cowper is best known for his Federation‐era designs, his interwar‐era work is lesser known today and the characteristics and defining works from this period have not been examined in depth but merit further study. 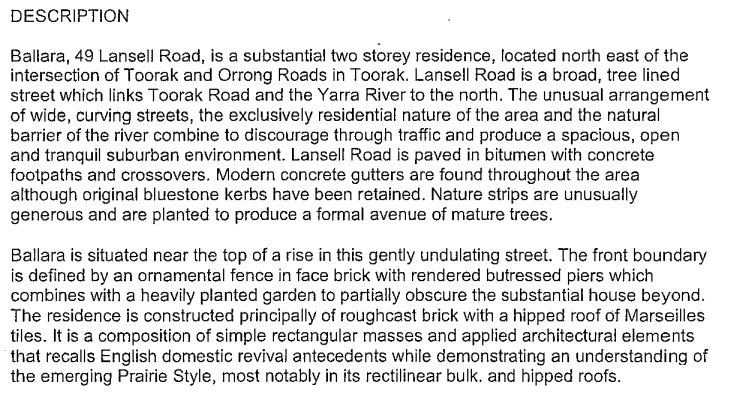 The former Hawthorn Motor Garage at 735 Glenferrie Road is classified by the National Trust of Victoria.

The former Hawthorn Motor Garage is a single storey brick building which is now the oldest known purpose-built motor garage in Victoria.

Designed by renowned Melbourne architect Christopher Cowper and built for George Bingemann in 1907, the home remained in the Bingemann family for 94 years before being purchased in a dilapidated state by the current owners in 2001.

A delightful example of the Federation style with its red brickwork, large gable and bay windows, the current owners have restored and revived the house, carefully preserving its period features and at the same time transforming the home into the modern example of family living it is today.

This elegant residence with a commanding corner position (1126 sqm approx) is a Studley Park landmark.

The house at 19 Lisson Grove, Hawthorn, is of local historical and architectural significance as a good and relatively externally intact example of an attic storey Federation-era bungalow which demonstrates the transitional period from villa to bungalow architecture. 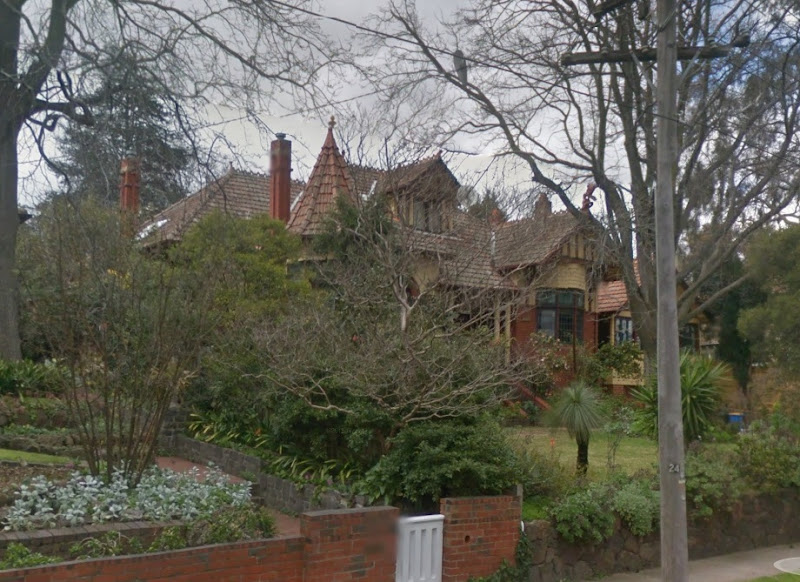 Old Sale Listing
“Set on some 14,750 sq ft (approx.) of private gardens, the home comprises grand entry, formal sitting, formal dining, study, kitchen with meals area and 6 bedrooms. The established grounds include a swimming pool and a lock-up garage plus double carport.”
54 Mary Street in Hawthorn is part of the wonderful Grace Park precinct. The land size is very good at just under 1400m2 and the block has excellent width.

Chrystobel Crescent was constructed around 1915 at the end of the second phase of development.

Summerland’s architectural design presents a strong presence to both Fitzroy and Acland Streets in a sophisticated blend of Stripped Classical, Mediterranean and English Arts and Crafts influences: a distinct departure from its architect, Christopher A. Cowper’s previous well-known Federation style particularly in the Grace Park Estate, Hawthorn, such as at 40 Crystobel Crescent and 62 Riversdale Road, built during 1903-12.
Cowper (1868-1954) was an architect and developer.

Four more flats, even larger at 200m² each, were built in the two-storied block along Acland Street, in the next year.

Summerland Mansions (boldly embossed on the second floor balustrade), could not be anywhere in Victoria, but St Kilda.

For the first residents at Summerland its large rooms must have offered a sense of secure privacy, with views across the bay and the gardens.

The accessible roof may have even been influenced by Le Corbusier’s Dom-ino system with its accessible roof of 1913-15, which was well-publicised, but it is particularly early example for Australia, even if it resulted from the Council’s requirement for 50% open space on a fully built-up site.

The market for Summerland apartments seems to have been for tenants who would have expected a butler and maid in their own house and continued to expect this level of service in a more urban context.[2]

The Cedar Court building is one of few examples of the Federation Queen style in Hobart. This example is particularly substantial and rich in adhering to the characteristics of the style. It is one of the most extensive surviving developments, and provides a significant contribution to the style in Hobart.

Cedar Court is one of few examples of Couper’s work in Tasmania. Couper was a Melbourne based architect, and completed at least three large works in the Federation style in Tasmania. It is a prominent example of a dwelling that was originally set in a larger garden and surrounds.

The Gables is an example of Federation Queen Anne, designed by Architect Chris Couper (Melbourne) and constructed in 1911. Features inherent of the style and inclusive of this example are: an asymmetrical complex roof structure, which is noted in the three prominent offset gables of steep pitch which give it a vague Tudor feeling and terracotta roof tiles with ridge and apex ornament. The Gables has a half-timbered effect above the bay windows in combination with stucco in the gable ends. The timber work is scalloped and painted green.

The base is of the building is sandstone and the cement mortar of the external walls is a combination of half painted “Queen Anne Red” and the raw grey of the concrete mortar itself. This effect adds to the richness and is unusual in the knowledge that although concrete had been introduced for some time and cement mortars were in general use for exterior application, keeping with the avoidance of simplicity of the Federation Queen Anne style, “The Gables” example has stylised brackets for the projecting gables and turned woodwork verandah columns of the Tuscan order. The front facade features two round accent windows with multipaned toplights in projecting bays either side of the entrance porch.

There are hipped side wings, set back from the façade, and an L-shaped service wing at the rear. The house has two main chimneys along the front slope of the main roof which are rectangular, finished in roughcast render, with simple banding and terracotta chimney pots at the top.The house is single storey with a high hip roof covered in dark grey Marseille-pattern tiles.

The front façade displays a restrained, symmetrical composition with a loggia of three round arches set in the centre. It is finished in a warm grey roughcast render that either has never been painted or is covered only with a sheer wash.

The house at 23-25 Canterbury Road is an early example of the Interwar Mediterranean style in Boroondara and more widely in the metropolitan area. As discussed in the history, this style was influenced by classical Italian and Spanish forms and precedents.

There is often crossover between this style and elements of the concurrent Georgian Revival, particularly the use of dominant hip roofs and louvered shutters. It also has some relation to the more embellished Spanish Mission style, which has similar massing and use of loggias but is also characterised by multiple decorative flourishes such as ogee parapets, twisted columns, Cordoba roof tiles and cast-cement reliefs.

“Standing proudly in one of Boroondara’s finest tree-lined streets, ‘Wongrabel’ c1901 is a gracious Federation residence in the Queen Anne style on an established garden allotment with ROW access. A magnificent address in the Russell Estate.

Built by and for owner Christopher Cowper.[3]

Heritage:
Contributory – local significance: B grading. This house appears to be the remodelled 1920 house built by noted architect and owner Christopher A. Cowper.15 It occupies the same footprint as shown on the original plan form.

His key works after 1906 include the 33 houses for the Grace Park Estate in Hawthorn (HO152), which George Tibbits described as ‘a sanctuary of houses in the Melbourne Queen Anne manner’. He designed many other houses and several commercial buildings within Boroondara and other middle-class Melbourne suburbs such as Brighton, South Yarra and St Kilda (Logan 2012:179). His work included houses at

Apart from houses, he was also responsible for innovative designs such as

After 1915, Cowper appointed his young associate Gordon Murphy as the office’s chief designer. In 1921 he formed Chris A. Cowper, Murphy and Appleford with Gordon Murphy and young draftsman Reginald W Appleford, moving into an office at Chancery House, 440 Little Collins Street the following year (Logan 2012:179).

In the 1920s Cowper focussed on real estate and finance as a speculative builder and real estate developer, but also continued residential design, which Logan (2012:179) notes ‘exhibits great refinement in detail and composition. His highly individual handling of joints and bracket details is especially skilful, and adds not only visual interest to the houses, but also imparts a craft-like quality to his architecture’ (Logan 2012:179). The
partnership was dissolved in 1930 when Cowper retired from the practice, however, Murphy and Appleford were able to continue running the practice under the same name (Argus 3 Jun 1932:1). Works by the office include 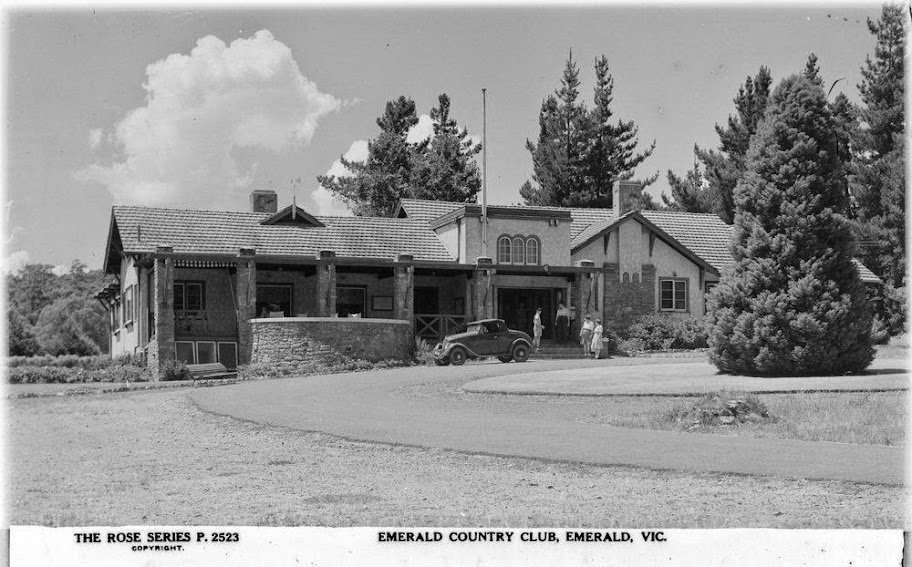 Identified Cowper house designs in the City of Stonnington:

Other contemporary houses identified in heritage studies of the city as significant: