The Arts and Crafts style came out of a movement to get away from mass-production and rediscover the human touch and the hand-made.

Add to this the Arts and Crafts roof:

The wooden Shingle style is an American architectural style made popular by the rise of the New England school of architecture, which disliked the highly ornamented patterns of Queen Anne architecture.

Faceted window: any window which has a number of ‘faces’, which are joined by silicon. For example, a bay window usually has three facets.

The Red House, in Bexleyheath, London , designed for Morris in 1859 by architect Philip Webb, exemplified the early Arts and Crafts style, with its well-proportioned solid forms, wide porches, steep roof, pointed window arches, brick fireplaces and wooden fittings. Webb rejected the grand classical style and based the design on British vernacular architecture expressing the texture of ordinary materials, such as stone and tiles, with an asymmetrical and quaint building composition.
Note that the bricks used in 1859 would have been hand-made, with mass-production starting in the 1880’s leading to a boom in brick housing.

In English Arts and Crafts, asymmetry, dominant chimneys and high roof pitches with low eaves are the keys

Right: Thatch is used occasionally on new UK dwellings and demands a roof pitch of at least 45°, and more likely 50°, to allow the rain to flow off quickly and prevent ingress. This steep pitch is also an essential ingredient of cottage style. 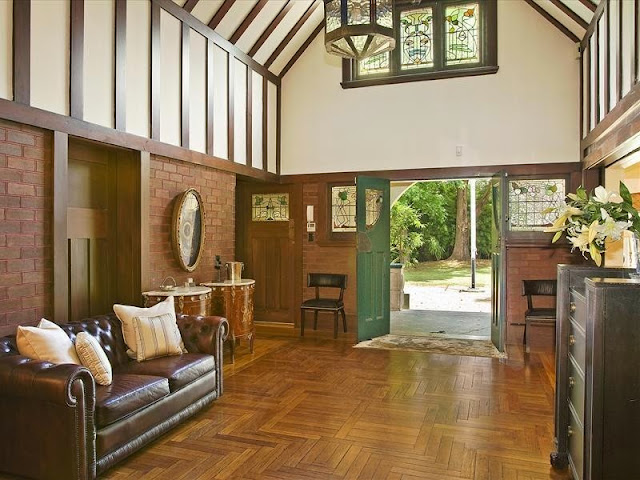