The Federation Revival Movement and its Arguments

When is it Federation style? When is it just bad taste? Read on:

An interesting article appeared in Melbourne’s The Age about ‘imitation heritage’ buildings
The article highlighted the two extremes of design in areas of heritage significance.

Whilst both approaches have their supporters – and their critics – what does it all mean for the average person who wants to build a new home, renovate or develop property in a ‘neighbourhood character’ area?
The answer is simple – don’t assume anything!

Obtaining Council approval to develop property in a heritage-sensitive location can be unpredictable, time-consuming and expensive…it’s not for the impatient! An open mind is very important, as is negotiating skill and a willingness to compromise if necessary.

The Australian Institute of Architects (AIA) is worried this will result in more prescriptive planning that will further stifle creativity and innovation and lead to more ”mundane” streetscapes.

President Ian Wood said: ”I can understand why architects don’t want their creative flair to be inhibited but when you look at some of their stuff, it stands out like a sore thumb. The architect thinks it’s innovative but locals abhor it.”

During the early-1990s, many of the design elements that characterised the federation architecture of old were popularised in mainstream architecture. This Federation revival form is also known as “mock federation” or “faux federation”. The style was widespread within the realm of residential housing (especially in new development suburbs) and for apartment buildings; however, smaller shopping centres and other public buildings also made use of the revival style that retained widespread popularity until the early 2000s. Sydney suburbs developed in the 1990s such as Cherrybrook, Castle Hill, and Menai are notable in the sense that large tracts of these developments contain almost exclusively Federation revival homes.

The construction of Federation revival architecture varied little from that of other basic styles, with the federation elements merely forming the facade and decorating elements of the building. For example, the typical brick and roof tile construction, hexagonal turrets, ornate gable work, prominentverandah, steep pitched roofs, and faceted bay windows served to parallel the traditional federation architecture.[2]

A STREET of mock-Federation McMansions is to be protected by a heritage conservation order, even though the houses are less than 20 years old.
Hornsby councillor Bruce Mills is leading a push to have Cannan Close, Cherrybrook, gazetted as a heritage conservation area.
While the cul-de-sac was only developed in the 1990s, Mr Mills said it was already architecturally significant, and brushed aside claims that it was too new to be listed.

Meredith Clisby –
Number 15 Abbey Road, Goulburn, is one of the area’s finest homes. 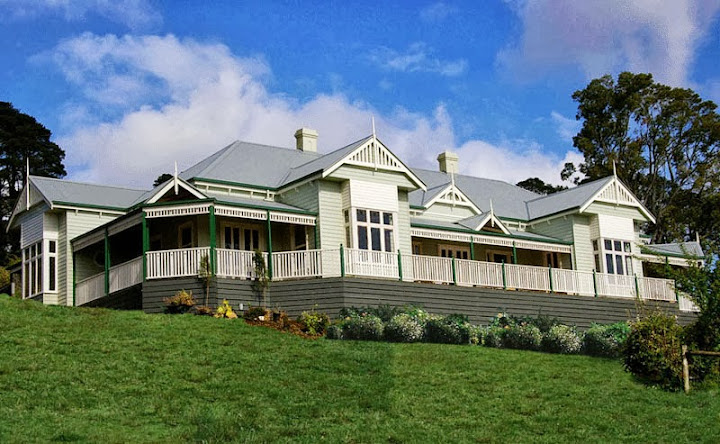 “A magnificent home ideal to be positioned in a beautiful place.
Carefully derived from our homestead series the three gables and portico front entrance give an unmistakable look to the design.”)

This heritage-listed early Federation home has endured inappropriate additions, unsightly alterations and neglect. The new owners took on the role of custodians of the property, with the intention of restoring it to its original glory. Existing spaces were reconfigured and new additions built to enhance the home and to suit a contemporary lifestyle.

The house was dark, depressing and disjointed; it is now filled with light, and the flow from space to space is logical and functional. All original features have been respected, repaired and replaced, and bad additions were demolished or reconfigured with respect to the original design language. The new work and additions are seamless, and the new joinery, kitchen and bathrooms are contemporary but classic in interpretation.

The home was not intended as a showpiece, but rather a sanctuary for the family, who appreciate good design and art. The furniture has been carefully selected to reflect the home’s past and its future, with an emphasis on comfort and contemporary classics, but with a nod to history in a few antique pieces.

In a true collaboration, designer and client have exercised great care and commitment in this project to restore a Federation residence that has endured a chequered past including periods of neglect. The interior designer has respectfully recognized and enhanced the original features of this home through expert manipulation of light, colour and material. A sublime balance of light and shade is achieved through openness, enclosure, content and space. The inspired selection of eclectic furniture pieces speaks of durability and quality. As a whole, the project pays homage to tradition within contemporary interior decoration practice. 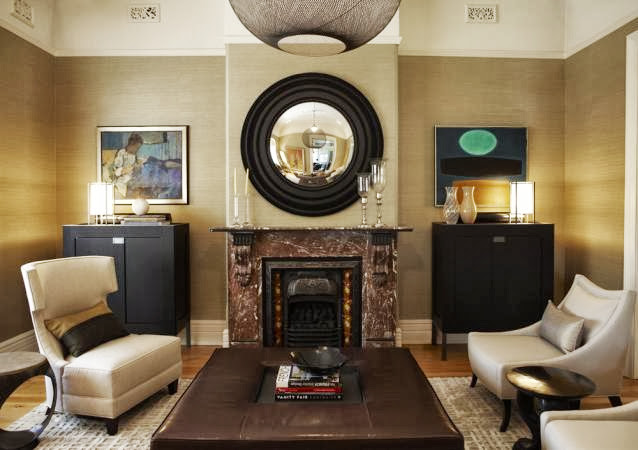 Jury Citation:
In a true collaboration, designer and client have exercised great care and commitment in this project to restore a Federation residence that has endured a chequered past including periods of neglect. The interior designer has respectfully recognized and enhanced the original features of this home through expert manipulation of light, colour and material. A sublime balance of light and shade is achieved through openness, enclosure, content and space. The inspired selection of eclectic furniture pieces speaks of durability and quality.

The owners of a heavily renovated 1913-built mansion have had one eye on its past and one on its future, writes Amy Noonan.

A THORNGATE mansion has had a long and rich history before falling on hard times.
However, it was its run-down nature that appealed to Liz Peter, when she and her husband bought the Fitzroy Tce property five years ago.

Remaster of art and craft
“A renovation has modernised yet respected the design of this historic home including the family room, a new pool area, the exterior and porch entry.

Not all renovation is sympathetic to Federation detail: This house would have had period interior decoration….
House of the Week
Federation style home’s modern renovation

“This stunning white Federation home in Auckland NZ has recently undergone a renovation and oh my…its fabulous. This home is featured in the latest issue of Trends Renovation.

“And just when you think its going to be a wash out of white inside….the black cabintery does a stellar job of creating a dramatic modern kitchen.