Botanic gardens that are open to the public seven days a week:

The Mount Macedon Memorial Cross
One of the major attractions of Mount Macedon is the 21-metre (69 ft) high memorial cross which stands near the summit of the mountain with manicured gardens.

The Gardens are situated on the banks of the Campaspe River between the railway station and the centre of the town.

The upper level of the Kyneton Botanic Gardens, known as the Kyneton Public Gardens, is formally laid out with garden beds and mature trees, and features an 1880 bluestone wall, the 1936 commemorative entrance gates, c1900 gardener’s office,1902 drinking fountain, c1905 rotunda, a shelter and two bluestone memorial pillars marking the entrance to McKenna Drive.

English Hawthorn hedges along the river, an oval and a pavilion relocated from the Kyneton saleyards during the 1970s.

A prominent and unusual design feature is the large “Oak Circle”, bordered by a privet, japonica and hawthorn hedge encircling rare oaks, and the single and double Hawthorn hedges lining the Gardens boundary along the Campaspe River.

The central focal point of the gardens is the Ornamental Lake with the formed island at its centre. This Autumn (2017) the following Mt Macedon gardens will be open to the public:[1]
Please check their open garden details and pre-book events at http://www.visitmacedonranges.com/whats-on/

The Garden is valued by the local community and visitors who regard it as one of Victoria’s outstanding gardens ( Criterion G.1).
Statement of Significance
Bolobek Garden is significant for demonstrating garden design styles as follows:

The Garden is aesthetically important for its contrived scenery with the following features:

Hascombe is a large garden owned by Linfox. It has an annual open day where all money received goes to charity.

R.L.J. Elery, the original owner, constructed a villa on the site in the 1870s.

The garden consists of a number of terraced levels with stone retaining walls. A system of pathways and steps link the various levels.[1]

The garden has a holly and linden walk, hedges comprising Pittosporum, Viburnum, Ilex and Eucryphia species.

Across Alton Road from Hascombe, is the garden Alton; one of the locations for the setting of the 2006 Australian film adaptation of Macbeth, mainly due to its historic residence surrounded by an English garden.

“Ard Choille, laid out by prominent industrialist, (Sir) William Macgregor, during 1893-99, is of National significance:

The garden of Ard Choille (pronounced Arda Hillier) both botanically and historically is one of the best of the renowned Mt Macedon gardens.

Ard Choille is unusual in the context of Mount Macedon Gardens for its siting on the Northern, rather than the Southern slopes of Mt Macedon.

The native forests of Ard Choille are abundant with indigenous wildlife including a variety of birds, kangaroos, wallabies, koalas, echidnas and wombats.

Durrol was laid out in the first years of the twentieth century and incorporates an enclosed garden by Edna Walling (1925) for the second garden owner;
The garden at Durrol has many fine specimens of deciduous and evergreen trees, including varieties of oak and tall lindens which form an avenue to the tennis court. Look out for the very rare weeping holly on the edge of the drive. A sunken garden designed by Edna Walling is a feature.

Durrol is of National significance:

I can find no regular open garden listing (or website) for Durrol, but organized garden tours do visit Durrol. For example:

From the entrance by the lodge, a long undulating driveway leads to the house beneath a canopy of elms. In the spring, masses of forget-me-nots and Ard Rudah is recognised by the National Trust as one of the top historic gardens in Victoria. Has a heritage overlay HO186, illustrated below

Stroll through the gardens of Cameron Lodge
The garden at Cameron Lodge is richly populated with all sorts of species of trees and plants, many of which date back 100 years or more.

Spanning more than four hectares of land, the European-style gardens at Cameron Lodge create an idyllic setting for anyone who wants to get away from the busyness of everyday life. If you’re looking for rest and relaxation, there’s surely no better place to visit. Sublimely romantic historic garden where drifts of bluebells, daffodils and woodland plants have naturalised beneath a canopy of mature trees and a brook leads to a secluded lake.[3]

“Dreamthorpe is one of the renowned hill-station gardens of Mount Macedon in Victoria.

Present custodians of Dreamthorpe are Jan and Peter Clark, who bought the property eight years ago. They say the influence of two major figures in late 19th-century English gardening, William Robinson and Gertrude Jekyll, is clearly evident and that their writings inspired Alice’s design and plant choices. Forest Glade is one of Australia’s finest private gardens, and has existed for nearly one hundred years. Forest Glade is open every day in season.
The magnificent landscaped garden covers fourteen acres (5.6ha) and has four distinct sections: “The name comes from the Scottish Gaelic word ‘Glen’ meaning ‘within a ridge’ and ‘Rannoch’ which means ‘bracken’ or ‘fern’.”

“Glen Rannoch was built in 1873 making it the third oldest property on the mountain. The name comes from the Scottish Gaelic word ‘Glen’ meaning ‘within a ridge’ and ‘Rannoch’ which means ‘bracken’ or ‘fern’.

“The 1983 Ash Wednesday fires damaged much of the garden but it has since been completely renovated – partly by Stephen who was the head gardener for two years after the fires. “[7]

“The garden comprises formal and informal sections. The formal is closer to the house and has mass plantings of perennials and shrubs, beautifully set off by well-clipped box hedges. The informal sections become more apparent further away from the house and down towards the creek, the beautiful fern gully and bushland. The steep, three-hectare garden is broken up into four levels which are joined by paths and over 500 steps, of which Stephen has “raked every one of them!”

“The National Trust considers the Macedon Ranges to represent one of the most important collections of 19th Century gardens in Australia. Glen Rannoch is one of the best examples of these with its stands of towering trees.

Karori is a 6 acre hill station property on the Southern slopes of Mount Macedon.

Advertised for sale in 1898 as ‘the well-known Italian villa’ in ‘one of the prettiest gullies in Victoria’, with the grounds ‘laid out into lawns, shrubberies, flower, fruit and vegetable gardens’.

This site is part of the traditional land of the Wurundjeri people.

The original ‘Matlock’ homestead was built in 1919 for G.W.P. Creed who founded Woolworths (Australia) and it was used to intern the Japanese consulate in the Second World War. – The Age

Marnanie is positioned in one of Mt Macedon’s more private, charming and exclusive pockets, entered by a long driveway under a treed canopy.

Constructed in 1890, this historically significant address was once the home of the first Australian-born Governor General, Sir Issac Issacs, in addition to being the primary residence of Kevin O’Neill – a prominent society florist and gardener. 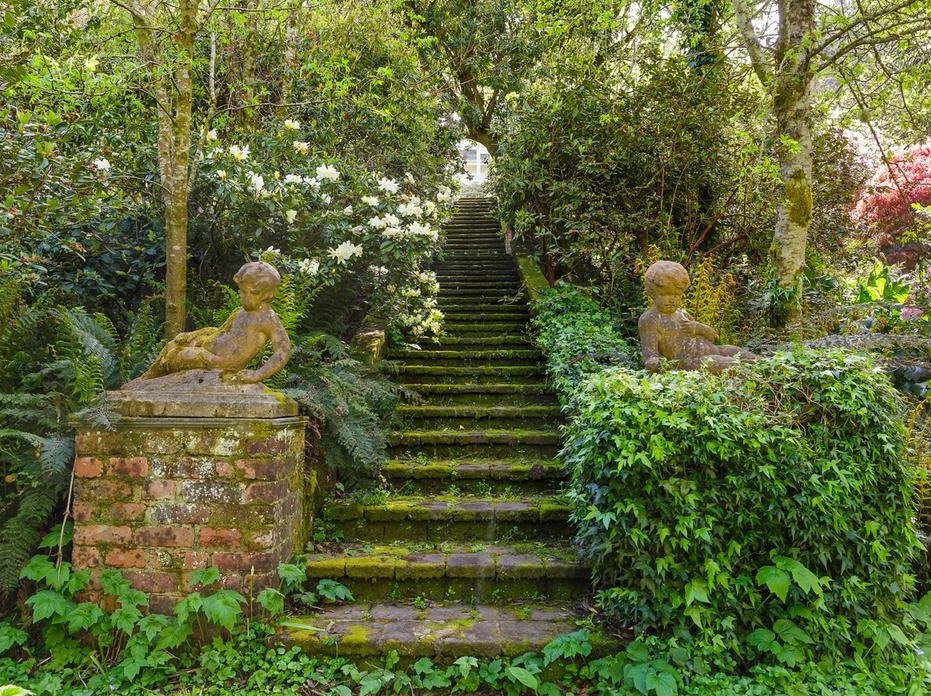 The 16 acre garden is a sight to behold. With highly fertile top soil, the gardens of Marnanie include collections of exotic, native and English trees over a century old, perennials, bulbs, and extensive stands of tree ferns.

Penola is a majestic 19th Century garden estate of 11.2 acres approx on the Witch creek, established by the sister of William Guilfoyle, creator of the Melbourne Botanic Gardens. Sefton – A Gracious and Stately Country Estate Circa 1907

Built by the Baillieu family as a summer holiday home in the early 1900s, the 8.8 hectare English garden was laid out with obvious influences of the Melbourne Royal Botanic Gardens directors Baron von Mueller and W. R. Guilfoyle.

Certainly, once behind that tall hedge, and having crunched quietly over gravel on the winding drive and past neck-stretching 100-year-old beeches, maples, oaks, cedars and the odd California redwood, visiting Sefton vividly recalls a more gracious time.

Tieve Tara was originally part of an extensive property brought by W. Christian in 1854 and was known as Christian’s Orchard.

In 1983, the property was purchased by John and Dawn Wade. Shortly after, the Ash Wednesday fires that engulfed Mount Macedon, destroyed the house on the property and severely damaged the gardens.

Mother Nature has played a big role at Tieve Tara. In 1962 fire destroyed the original house and caused damage to the gardens.

Since John and Judith Brand purchased the property in October 1995 they have worked continuously to further enhance the beautiful garden.

‘Tieve Tara’ is a hillside residence with breathtaking views in Mount Macedon, an hour’s drive north of Melbourne.

The current house is the third to be built there. The previous two were destroyed by bushfires in the 1960s and 1980s, and the garden was also damaged by fire.

Judith Brand and her husband John are the current owners. They bought the property in 1995 and have since added a new lake in the top garden, improved the original lake at the bottom of the garden, and installed irrigation strips in the lawn. They have combined new with old to give it a fresh look.

‘Tieve Tara’ has a very special feel. It is a tranquil, spiritual paradise that Judith and John consider not just theirs but something they can share with everyone as a gift for future generations.

Garden designer William Sangster shaped some of Melbourne’s most significant gardens including the heritage properties Como and Ripponlea in Melbourne and Rupertswood in Sunbury.

The Taylor and Sangster Nursery site, established in 1875 and operated until the 1930s by descendants of Sangster, is of State cultural significance for its collection of trees and plants, representative of nineteenth century horticultural fashion incorporating many species now rare in cultivation in Victoria and for several outstanding individual specimens listed separately on the National Trust Register of Significant Trees.

“It is upwards of 30 years since the Toorak Nursery was first established by Messrs. Taylor and Sangster. In the early (eighteen) sixties.[15]

The land on which this nursery was sited once formed part of the Macedon State Forest. An application for a licence to occupy the land was filed by James Smith Turner, a labourer of Upper Macedon, in October 1873 and was duly considered by the local Land Board.

The Nursery was glowingly noticed in the Australasian in 1883 (hardly surprising since Sangster was the pseudonymous author):

‘In a lovely sequestered dell, on the southern slope of the mountain and within a cooee or two of the lovely residences to be found dotting the heights of Upper Macedon, is found perhaps the most picturesquely situated nursery in Victoria, not of large extent, but containing one of the finest, probably the very best, collections of coniferous plants to be seen anywhere in the Colony.’

Taylor died in 1892, leaving Sangster to carry on until his death in 1910. Jane Sangster, a daughter, then carried on both nurseries until 1930.