All about the Shingle Style

The Shingle Style in America was made popular by the rise of the New England school of architecture, which eschewed the highly ornamented patterns of the Eastlake style.
[In architecture the Eastlake Style is part of the Queen Anne style of Victorian architecture.]

In the Shingle Style, English influence was combined with the renewed interest in Colonial American architecture which followed the 1876 celebration of the Centennial.

The Shingle Style conveyed a sense of the house as continuous volume. This effect—of the building as an envelope of space, rather than a great mass, was enhanced by

McKim, Mead and White and Peabody and Stearns were two of the notable American firms of the era that helped to popularize the Shingle Style, through their large-scale commissions for “seaside cottages” of the rich and the well-to-do in such places as Newport, Rhode Island.

Many of the concepts of the Shingle Style were adopted by Gustav Stickley, and adapted to the American version of the Arts and Crafts Movement.

Shingles had been a traditional roof covering in northern Europe, and in England in particular, and they were used in Australia from the first years of settlement, although they were no longer current in England itself.

The Shingle Style originated in New England in the 1880s and and became popular across the whole of the United States by the beginning of the next decade, the 1890s.

In Victorian days, shingles were often used as ornamentation on houses on Queen Anne and other highly decorated styles. But American architects Henry Hobson Richardson, Charles McKim, Stanford White, and even Frank Lloyd Wright began to experiment with shingle siding (on walls).
Also known as ‘seaside style’, the Shingle style is not that common outside New England and never gained the wide popularity of its contempora 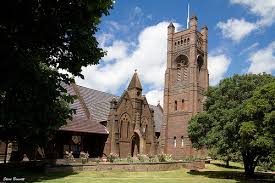 Architect Henry Hobson Richardson is credited with designing and building the first Shingle house prototype, the Sherman House of Newport, Rhode Island in 1876. (see above)

The Shingle revival in Australia

from: Miles Lewis: Australian Building
In New South Wales John Horbury Hunt used shingles for the roof of St Peter’s Cathedral, Armidale, which might be considered somewhat primitive. But this was a grand and sophisticated brick church, and the choice of shingles must have had more to do with the British medieval tradition and the ideals of the Arts and Crafts movement, and Hunt used shingles frequently in the period 1870-90.

Shingles enjoyed a more general revival in Australia in the 1880s, in response to the shingle style of the United States, but they were generally imported rather than locally produced.

In 1892 Guyon Purchas proposed a shingle roof to be laid over corrugated iron for ‘Boisdale’ homestead, Victoria, though in the event French Marseilles tiles were used instead.

In 1906 Howard Joseland, a devotee of the Arts and Crafts, favoured silver-grey shingles in combination with roughcast, red brick, brown painted verandah woodwork and blue-green eaves,

However, shingles long remained a feature of Arts and Crafts design, especially in Western Australia where they had made their first appearance later than in the east.

Meanwhile ‘Redwood’, the imported Californian bungalow of 1915-17, promoted in Sydney by Richard Stanton & Son, had a redwood shingle roof, and so, it appears, did some of the bungalows which followed.[1]

What Makes a Shingled Style House?

The Shingle style rejects excessive decoration and embellishment and seeks instead the effect of a complex shape enclosed within a smooth (wood shingle) surface. It is the wall of shingles which unifies the irregular outline of the house. In Shingle style houses decorative detailing, when present, is used sparingly. The style emphasizes the volumetric spaces within the house more so than exterior surface details.

In Shingle style houses the walls appear as thin, light membranes shaped by the space they enclosed. The effect is heightened by bulging segmental bays or half round turrets jutting out from the body of the houses rather than as fully developed elements. At times the shingled walls seem thinner and lighter when contrasted with a basement floor of rubble masonry or fieldstone.

Roofs are usually of gentle pitch with extensive gables; in two-story houses the roofs even go down and out to the ground-floor level harking back to lean-tos found in 17th century New England saltbox houses.

The Shingle style does borrows some features from the Queen Anne style: wide porches, shingled surfaces, and asymmetrical forms.

The following images are from the post Architect E. Jeaffreson Jackson:
• Dark and rough-hewn stone masonry
• Asymmetrical volumes in the form of cross gables and roof sections of different pitch, wings, turrets, bays, and oriels
• Shingles in many colors, such as the Indian reds, olive greens and deep yellows

• Shingles form a continuous and contoured covering, stretching over roof lines and around corners
• Sweep of the roof may continue to the first floor level providing cover for porches, or is steeply pitched and multi-planed

• Small casement and sash windows which may have many lights, and often are grouped into twos or threes

• An “eyebrow” dormer is distinctive
• Free-flowing interior
• Large rooms and porches loosely arranged around an open “great hall,” dominated by a grand staircase.

Freedom and openness characterize the Shingle style interior. The focal point is a living hall complete with fireplace, which is a feature inherited from the English Queen Anne houses.

From page on Gordon Heritage

Tulkiyan is an Arts & Crafts style suburban villa designed in 1913 by architect B.J. (Bertrand James) Waterhouse (1876-1965) of Waterhouse & Lake Architects.
The house was built for Mrs Mary Donaldson and her husband William, a Sydney merchant. It remained in Donaldson family ownership and occupation for 80 years, with minimal alterations to furnishings and building fabric. When the last of the family, Miss Mary Donaldson, died in 1994 aged 91, Tulkiyan became the property of Ku-Ring-Gai Council.
As a house museum, Tulkiyan illustrates the early 20th century fashion, taste and lifestyle of an Edwardian family on the affluent upper North Shore of Sydney. The largely intact interior is furnished with most of the original contents of the house. Furniture bought from David Jones in 1913 was simply updated in 1930 through the replacement of worn carpets and a re-covering of dining chairs.The original front garden layout also remains, along with remnants of early plantings, including lily pilly trees on either side of the main gate. Tulkiyan’s asymmetrical form, gables, shingle roof, wall finishes and bay windows are also typical of the period and the dark stained timber joinery of the interiors, decorative plaster ceilings and Art Nouveau style gas fireplaces are all synonymous with the Arts and Crafts architectural style.

Built in 1913, Tulkiyan is an important example of the work of Bertrand J Waterhouse, a prominent Sydney architect. In Federations arts and crafts style, it displays asymmetrical, dominant gables; shingled roof and wall finishes; and bay windows. The interior includes elaborate plaster ceilings, Art Nouveau style gas fireplaces and built-in cupboards – an innovation at the time.

The Donaldson family lived in the house continuously for over 80 years from 1913, during which the original style was maintained. The home and its contents provide an insight into upper middle class life in Sydney during the first half of the 20th century.

Tulkiyan was built for Mary and William Donaldson and their three children, Mary Isobella, William Jnr and Margaret.

Tulkiyan was built on part of the 40 acres of land that had been granted to Michael Ansell on 30 June 1823. In 1824, the 40 acres was sold to William Fowler, who then leased it to Messrs. Giles and

Ritchie. It was further mortgaged to Samuel Lyons, an auctioneer, who, in 1843, finally disposed of the property to Robert McIntosh II who was already a landowner and occupier of other substantial properties in old Lane Cove.

The Shingle style, unlike the earlier Victorian aesthetics which preceded it, was an unusually free-form and variable style. One reason for the range in variety is the that it had originated and remained primarily a high-fashion style designed by architects for the wealthy rather than becoming, like the Queen Anne, adapted for housing among all social classes of Americans.