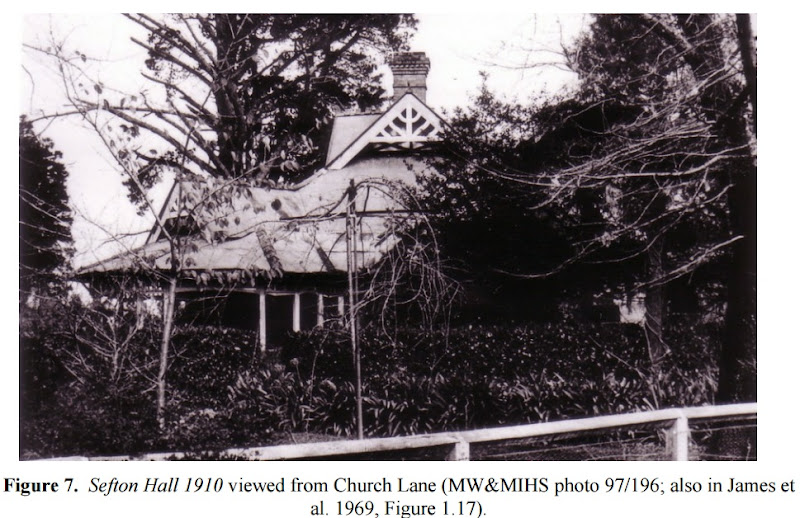 Henry Marcus Clark, the well-known Sydney Retailer, purchased a number of portions of land in Mt. Wilson c.1910-1912 including Beowang. However for his residence he built Sefton Hall (Figure 7) where Balangra (the home of James Dalrymple Cox, the brother of George Henry Cox) had stood,

Sefton Hall was completed around 1912 as a summer retreat for wealthy Sydney retailer Henry Marcus Clark (1859-1913). Clark had made his fortune from the Marcus Clark & Co. chain of department stores which he had established in 1883. When he bought the Mount Wilson property, then known as Balangra, from pastoralist James Dalrymple Cox in 1909 it included a late nineteenth-century timber cottage with lattice-enclosed verandahs. The cottage now stands within the grounds of Sefton Hall and is known as the ‘billiard room’.

Clark called his new house ‘Sefton Hall’ after the village of Sefton in Lancashire, England where he had grown up. An earlier home in the Sydney suburb of Dulwich Hill had also been named ‘Sefton Hall’.

The Mount Wilson property sprawls across 20 rooms and is clad in fibro with pressed metal ceilings, though the original corrugated iron roof has been replaced by slate. The original materials were chosen for both their portability and fire resistant qualities.[1]

Although Clark died not long after Sefton Hall was built the property remained in family hands until 1994. The house and grounds were photographed prior to the first ever public sale of the house. 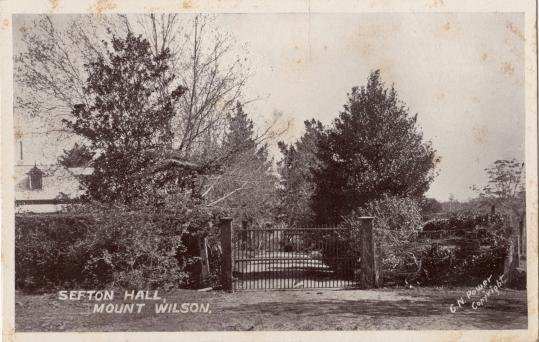 Sefton Hall, its billiard room and garden display both characteristics of the early development of Mount Wilson before 1890 and the sort of twentieth-century development which another generation of the wealthy could bring to the hill-station.

Sefton Hall is of high significance for its selection of materials, particularly the extravagant use of fibrous cement sheeting on a residence of substantial scale and conscious design.

Images from the Blue Mountains Library

The death of Marcus Clark

From about 1910, Henry Clark who had some recurring health problems began to think about retiring.

The funeral was held at Enmore.

Walden concluded: Mr. Clark was a deeply religious man; though he seldom spoke his thoughts, he loved and worshipped God…….All of Mr. Clark’s children, except the youngest boy are members of the Church of Christ, Enmore….He was an entirely honest merchant and his memory is to all who keep it, dear and helpful. His sons and daughters whom he loved to the uttermost say this of him.

Mount Wilson has high state significance because of its unusual development as an Indian-type hill-station for a handful of wealthy businessmen, lawyers and politicians escaping in summer from the climate of Sydney and Newcastle.

Mount Wilson has been a popular weekend destination for more than a century.

Is it the lichen on the beautiful old outdoor setting, the tunnel vision of colourful trees on the main avenue, the statues, the clean mountain air, the ornate gates, the ornamental features on the old houses or the glorious green lawns?

Mt Wilson is 9km off the Bells Line Of Road in the Blue Mountains. Allow for a good 90-minute drive from Sydney; along the way you can pick up fresh apples from the roadside stalls at Bilpin and stop off at the Mt Tomah Botanic Garden.

The department store owner in Marrickville Road
Fronting Marrickville Road at Dulwich Hill, Henry Marcus Clark (1859–1913) had the original property, Sefton Hall, named after the village of Sefton in Lancashire, England where he had grown up.

Sefton Hall Marrickville had a high brick fence concealing it from view. The Clark children loved to hide behind the fence at dusk and, as people were walking home from work, they would throw a penny tied to a piece of cotton and pull it back quickly. The children would laugh at the sight of someone madly chasing the penny up Marrickville Road.