Walter Liberty Vernon (11 August 1846 – 17 January 1914) is noted for designing multiple government buildings which are still standing, many of which have a heritage listing. (see below)

Vernon established a private practice in Sydney. Commissioned to build a department store for David Jones Ltd (George and Barrack streets, 1885), Vernon designed his own home, Penshurst, at Neutral Bay in 1884.

On 1 August 1890 Vernon was appointed government architect in the new branch of the Department of Public Works which had been created to allow private architects to compete for the design of all public buildings estimated to cost over £5000. The government architect was to supervise the construction, with a commission paid to the selected architect.

He employed a range of styles, but all reflecting his early training and English influences. 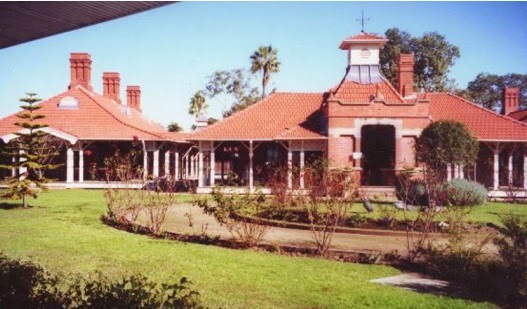 In the early 1890s Vernon was the leading NSW exponent of the emerging local variant of the Queen Anne Revival that today is known as the Federation style. Rather than employing the neoclassical for public buildings, he continued to experiment, as he had been doing since his arrival in Sydney, with acclimatising the Queen Anne Revival style to suit NSW.

The Chalet, designed by Vernon to sit immediately adjacent to the Gothic Revival Government House designed by Edward Blore, is a substantial timber residence built to accommodate the Governor’s Chief of Staff. 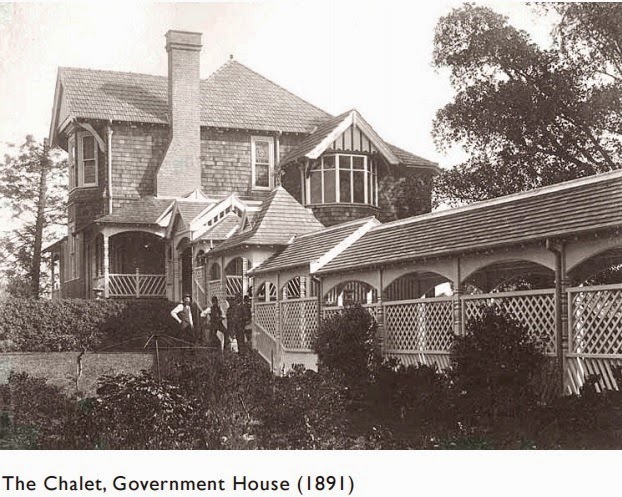 The court house at Maclean and the adjacent Post Office and Police Station, constructed between 1892 and 1896, show the informality made possible by the use of the Queen Anne Revival.

“It is gratifying to be able to report that, as a whole, the New South Wales modern police buildings compare most favorably with those in England, and in some respects I am of the opinion, are superior.” – Vernon.

Vernon had included a study tour as a condition of his appointment. He spent July and August of 1897 visiting public buildings in England and on the Continent

During Vernon’s period as NSW Government Architect he developed his distinctive ‘Federation Free Style” as the ‘leitmotif’ of the Government Office designs. [1]

For more substantial public buildings, Vernon continued the tradition whereby such buildings were designed in a Classical style. Notable examples were

On 11 August 1911, the day of his 65th birthday, Vernon’s twenty one years of administration came to an end, leaving the capable George McRae as his logical successor. He retired as New South Wales Government Architect and returned to private practice, establishing a partnership with Howard Joseland. The latter, also born in England, was a practitioner of the Federation Arts and Crafts and Federation Bungalow styles.[2]

Vernon died on 7 January 1914. Seven week’s prior to his death he entered hospital for treatment of a leg he had injured while testing a patent fire escape as Government Architect. The leg had to be amputated, but as Vernon refused an anesthetic, complications set in which led to his death.

The Prime Minister of Australia, Joseph Cook, in remembering Vernon said…. “It is with most profund regret…. that I saw that Colonel Vernon had gone over to the great majority. His was a most useful and valuable life…. It was Christopher Wren to whom it was said ‘if you could see his monument, look around’. So with Colonel Vernon. The public will see his monuments for a long time – perhaps for all time – in the city and in the country”.

To perpetuate his memory, the Lord Mayor of Sydney convened a public meeting, which raised funds to establish the “Colonel Vernon Scholarship in Architecture and Town Planning”.
Vernon’s “impressive funeral” at St James’ Church, Sydney on 19 January was attended by “a large and representative gathering of mourners”.[7]

When building revived in the mid-1890s, Vernon as Government Architect was permitted more staff.

In running the branch, Vernon insisted on the highest quality of design, the use of improved materials and construction methods, and the application of business-like procedures.

From 1901 Vernon had executed many site studies for the future Federal capital and later maintained that his most important duty had been his part in contributing to the eventual choice of Canberra.

As well as serving on many government boards and inquiries, including the royal commission on the Sydney water supply (1902), Vernon belonged to the Australian Club (from 1884), United Service Institution of New South Wales (1889) and Aerial League of Australia (1909); he was president of the Broughton Club (1910-12) and of the architecture and engineering section of the Australasian Association for the Advancement of Science (1913); he was also a commissioner for the Franco-British Exhibition, London (1908), a trustee of the Australian Museum, Sydney (1909), vice-president of the Millions Club (1913) and a councillor of the Town Planning Association of New South Wales (1913).

Walter Liberty Vernon (1846-1914), New South Wales Government Architect, was most famous for his grand public works including the Art Gallery of New South Wales, completed in 1909. Kogarah Fire Station is an outstanding example of the Arts and Crafts style and testifies to the influence of CF Voysey and the Arts and Craft movement on the New South Wales government architect’s office at the turn of the century.

Walter Liberty Vernon, Government Architect, was a resident of Neutral Bay and Alderman of the Borough of East St. Leonards, and was responsible for changing the name of Thrupps Point Road to Kurraba Road.

“There is an interesting collection of federation houses along Kurraba Rd between Wycombe Rd and Billong Stt erected on the Neutral Bay Land Company estate.

“The public will see his monuments for a long time – perhaps for all time – in the city and in the country”.