The journal, Building, described the work of Morrow and De Putron as having ‘a personality … which stamps it as emanating from the one office, particularly in the purity of design, with its strictly modern feeling in being useful, as well as decorative’
It was this type of contemporary appreciation of the work of the firm Morrow & De Putron that led to their popularity and success.

However, an added attraction could have been the fact that one of their major clients was (the) Hordern retail family.

De Putron was born in Darlington, Sydney in 1872. He was articled to R. Clarence Backhouse in 1891 before working at J. Wildridge & Sinclair, Engineers and then Robertson & Marks, Architects. In 1909, he entered into a partnership with David Thomas Morrow.
In 1908 De Putron had filled a ‘vacancy on Darlington Council’, becoming Mayor in 1912.
In 1911 De Putron married Alice Humphries, moved to Mosman where lived until his death in 1946. He opened his own practice in 1927 and served as an Alderman on Mosman Council from 1919-1928.

Morrow was born in 1871 and articled in 1891 to Morrell & Kemp, Architects. In 1896 he married Caroline Horn and served as Mayor of Redfern Council. In 1897 he opened his own firm, D. T. Morrow and from 1909 to 1927 was in partnership with De Putron, Percy James Gordon accepted as a third partner in 1921.
After De Putron left, Morrow and Gordon continued to practice and were responsible for two famous Sydney landmarks, the Grace Building in 1930 and in 1939 the AWA Building in York Street.

By 1910, a year after they entered into partnership, De Putron and Morrow were able to put their names to a number of new buildings.

Built 1905 to the designs of Morrow and de Peutron in the Art Nouveau style. 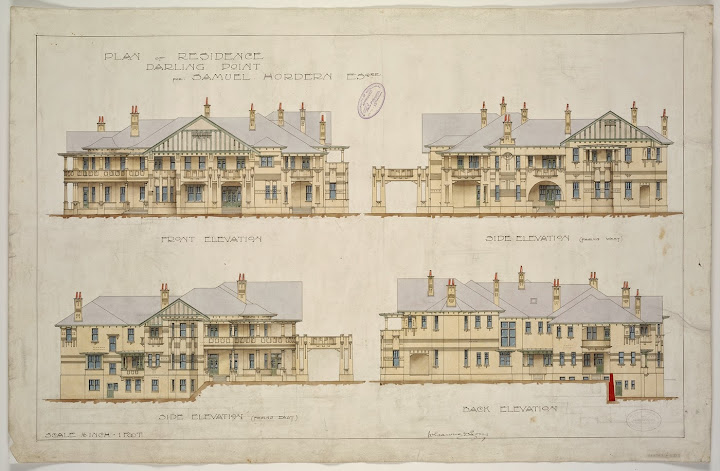 Erected in 1915 as a department store for Sydney Snow Stores Ltd, this building, replaces the original 1912 three storey building on the site which was destroyed by fire in January 1914.

Eastern block, 185-213 Broadway NSW
(Registered) Register of the National Estate
A pair of department store buildings which are of architectural and townscape significance. They are good examples of the Free Classical style influenced by Beaux Arts principles of design, which is rare in Australia. The twin clocktowers, which originally both had illuminated glass and steel globes, formed a familiar landmark in the streetscape of Sydney’s Broadway.

Two buildings of an Edwardian department store each side of Bay Street,

Milton Park Garden and Homestead exhibit a design style of exceptional interest: the homestead demonstrates the Federation Arts and Crafts style, with rendered and shingled walls, hipped and gabled roofs, tall chimneys and Art Noveau detailing; while the gardens demonstrate the Edwardian style with both Arts and Crafts and 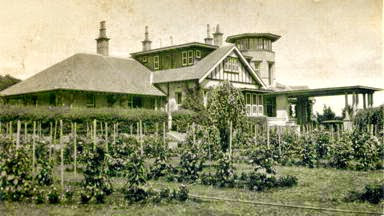 Milton Park gardens and homestead demonstrate exceptional design in the unusual large homestead with its well integrated Porte Cochere, verandahs and period detailing; the garden layout with distinct areas and garden themes linked by curving paths; the contrived vistas from the garden and house; and the complementing stylistic interpretation of house and garden also display creative achievement..

A large Victorian mansion built of sandstone and plastered, with a slate roof and an exterior colour scheme of Portuguese pink with white trimmings, it is of Italianate design which followed the general style of Retford Hall at Darling Point (built by E.Blacket for Samuel Horden).

Retford Park is currently the home of James Fairfax AC, a former Chairman and Director of the publicly listed media group John Fairfax Limited.
The European ownership of the land dates from 1821 when Governor Macquarie granted Edward Riley, two parcels of land, which included Retford Park (which he originally named “Bloomfield”).
The property remained in the Riley family until the 1880’s when it was acquired by Samuel Hordern, second son of Anthony Hordern, who renamed it “Retford Park” in recognition of family links to Retford in Nottinghamshire, England.

BEQUEATHED: Philanthropist James Fairfax (inset) will leave Retford Park at Bowral in trust for the benefit of the public. Photo by Bob Lewis

JAMES FAIRFAX, the philanthropic former chairman of the publishing company that bears his family name, will bequeath Retford Park, his imposing Highlands mansion, for the benefit of the public.

Retford Park, with an Italianate revival-style mansion, dates back to the 1880s when it was the summer retreat of the retailing Hordern family.
It sits in lush gardens that include the recent planting of three Wollemi pines.

Listed on the register of the national estate since 1980, Retford Park takes its name from the village in Nottinghamshire, the northern England town from where Anthony and Ann Hordern immigrated in 1825.

A fine example of a four storey facebrick Federation Free Classical style Commercial Building, which makes an important contribution to the streetscape of Bay Street. It is designed by the prominent architectural practice of Morrow and Deputron and provides evidence of the development of the Grace Bros Retail Empire in the early 20th century.

Including Interior and Central Patio, 13 Springfield Avenue, Potts Point, Sydney
The Vanderbilt has historical significance as it dates from one of the key period of layers for the development of Potts Point as a direct result of the subdivision of the Springfield Estate.

A three storey Inter-war Free Classical style residential flat building. It features a terracotta tiled pitched roof with an eyelid dormer which comprises a band of square windows. The façade is symmetrical with the two central bays projecting which originally featured balconies which have been enclosed. The outer bays feature double hung sash windows.

The building at 14 Etham Avenue was designed by Morrow and De Putron, architects of the nearby mansion building Babworth House for Samuel Hordern, brother of the well known Sydney storekeeper, Anthony Hordern.

The site of 14 Etham Avenue, Darling Point has some historic significance as part of the earlier estate of Etham House.

The building has social significance as part of the evolutionary development of the district and as an example of the more compact residence which was designed for the minimum of household assistance.

Thornton Street, Darling Point, N.S.W.
Originally a house built for Lebbeus Hordern by Morrow & Deputron, Hopewood House was a finishing school in the 1930’s and later a hospital.

In February 1915 they made their first building application to Mosman Council.