Note: Not all these links will work after September 30, 2018. After that time the links will have to be rebuilt from this website (over time) – Sorry about that!

The mansion is set on an elevated 6023-square-metre block on the Yarra River, and offers postcard river and city skyline views over Richmond.

The heritage-protected mansion was built in 1892 with an 1895 ballroom extension.

Subsequently, under the ownership of Mrs Rose Krantz, the architect Edward Billson, a prominent twentieth century architect, designed the subdivision of the interior in two maisonettes during 1935, and by 1947 it had been divided into six flats.

Darnlee, constructed c. 1899 by builder J. Gibb, was designed by architect Leonard J. Flannagan for Mr C. McIntyre. It was a private residence until the Second World War when it was used as a hostel for the WAAF. Subsequently Darnlee has been occupied by the Health Department, serving as a tuberculosis rehabilitation centre, and the Department of Education, and was converted into an aged care facility in the late 1990s. Darnlee is a finely detailed and essentially intact example of a Federation Queen Anne style residence.[28]

Glyn is one of Australia’s grandest mansions, recognised as one of the most significant architectural examples of the Arts & Crafts movement.

Corporate adviser, Jane Stuchberry sold her restored six bedroom 1908 Toorak mansion, Glyn which was listed with $12 million plus hopes in May 2016.

Glyn was designed by architect Rodney Alsop in the arts and crafts style with gabled roofs, prominent eaves and artisan features.

Why is Glyn significant?

As a committed Arts and Crafts practitioner, Alsop not only designed houses, he engaged in their decoration, with built-in furniture, carved woodwork, stained glass of his own design, and beaten metal ornamentation often made with his own hands. Alsop envisaged his houses as all-encompassing designs and works of art, and Glyn is a fine instance of this philosophy.
– See more:

Avalon is of regional significance as a distinguished example of the English Arts and Crafts style, especially as seen in the work of thearchitect CFA. Voysey.

Harry and Jane Butler and their family of three children, Lorraine, John and David, lived in the house in Power Avenue, which was numbered 14 Power Avenue. 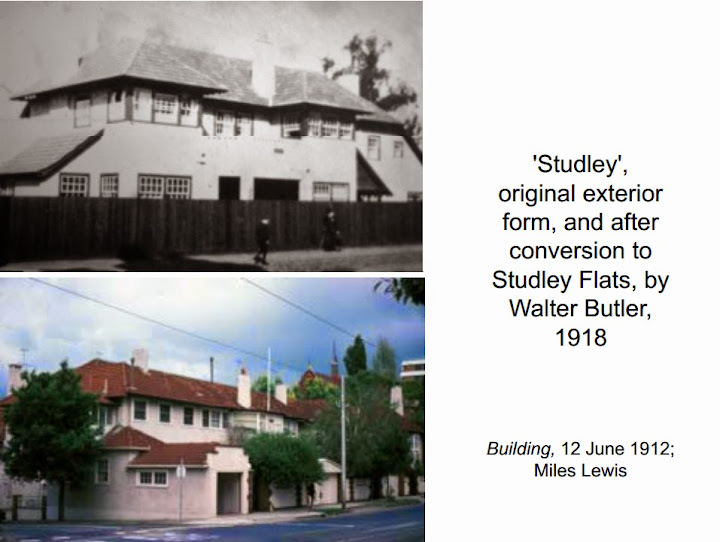 A complex of early flats which particularly exemplifies changing attitudes and a semi-servantless lifestyle as developed by the end of the Great War.

“Butler’s Old Masterpiece”
By JOHN WESTWOOD The Age 14 June 1985
DAME Nellie Melba is among the past residents of a remarkable development of ﬂats at Toorak, one of which has come onto the market, a rare event in itself.

41 Tintern Avenue was where Melbourne architect Walter E. Butler at the turn of the century built a ﬁne home for himself and his wife, who was Millicent Howard, ot the Howards who established a grazing property east of the city, named Studley Park.

This man however was no speculator. He was not in search of a fast buck, it seems; his aim was more in line with creating a garden setting where “respectable” people (vetted by Butler himself) could live in peace and tranquillity. 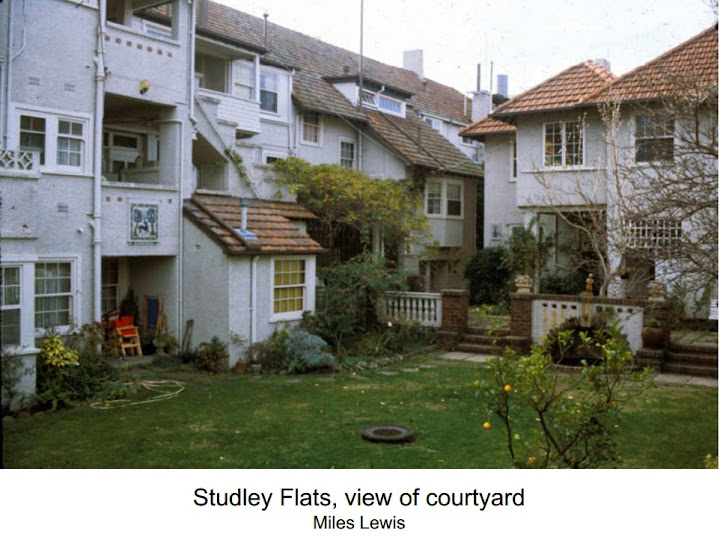 The gardens still are beautifully preserved and indeed the agents call the ﬂat “an enchanting garden apartment”. They must be right.

The grounds are divided into outdoor rooms circulating around stunning artisan crafted rock walls and terraces handmade from reclaimed cathedral yorkstone flags from Ireland, a domed central fountain and pond, and superb Bizzaza glass tiled swimming pool designed to sit in the space like a natural lagoon.

Eulinya and garden 48-50 Irving Road, Toorak heritage assessment (as assessed from the street)

An iconic Toorak mansion, situated on Albany Road (one of Melbourne’s finest streets – with prestigious 60m frontage) and the corner of Whernside Avenue.

The circa 1926, five-bedroom mansion (pictured) is at the north-east corner of Whernside Avenue, and Albany Road – which most advocates and agents agree is Toorak’s most expensive street.

Among Desbrowe-Annear’s grandest designs is the mansion at 729 Orrong Road, built in 1925 and retained for four generations by members of the Baillieu family.

FALLEN businessman Steve Vizard has set a Melbourne house price record by selling his Toorak mansion for about $18 million.

Muir offered $17.75 million reportedly because he admired from afar.

“The former M.H. Baillieu residence and garden, 729 Orrong Road, Toorak, designed by noted architect H. Desbrowe Annear in 1925 and retained in family ownership for over four decades, is of State cultural significance:

The striking five-bedroom home is on about 1020sq m, with plenty of room for the swimming pool and lush gardens.

Cloyne was built at 611 Toorak Road, Toorak in 1926 for Louis Nelken, reputedly a former Royal family butler, who married into the establishment Baillieu family. He was a director of Australian Knitting Mills.

Cloyne has a fascinating past after being built for Louis Nelken, reputedly a former Royal family butler, who married into the establishment Baillieu family.

In the 1960s Coyne was owned by the then flamboyant playboy Don Busch, who commissioned an extensive refurbishment which was carried out over eight years. The tycoon, but inexperienced polite, died in early 1970 in a Mustang plane crash at Bendigo in country Victoria.

Long described as one of the most architecturally significant buildings in Melbourne, Sothebys agent Greg Herman it was “truly a Melbourne landmark”.

“Notable among these are the graceful Church Street bridge, Richmond (1924), and Cloyne at 609 Toorak Road (1929), which has a jewel-like quality and is unified by the judicious repetition of a Venetian window motif.

Cloyne, the most glamourous of 1920s Toorak residences, has been sold again.

This time its been bought by emerging childcare centre entreprenuer, Darren Misquitta. He co-founded Oxanda Education whose program focuses on music, movement, creative play, social development and physical fitness. He lives at Cloyne along with Karina, his wife, and their two young children, who had been living at a classy Altona home.

Built by architect Robert Hamilton, Victoria’s foremost practitioner of the inter-war Old English/Tudor Revival style during the 1930s, this property sits at the end of a prestigious cul-de-sac and is surrounded by well-established manicured gardens.

“Robert B. Hamilton was the pre-eminent designer of flats, particularly in his trademark Old English style, in Toorak and South Yarra inthe 1930s.

Nonetheless Hamilton is remembered best for his Old English style flats and commercial buildings constructed in Toorak and South Yarra.

Set within picturesque garden surrounds, the 1930’s solid brick home offers a wonderful template for an exquisite renovation or refurbishment.