Point Piper is an affluent, residential, yet small harbourside eastern suburb of Sydney, in the state of New South Wales, 6 kilometres (4 mi) east of the Sydney central business district, in the Municipality of Woollahra. 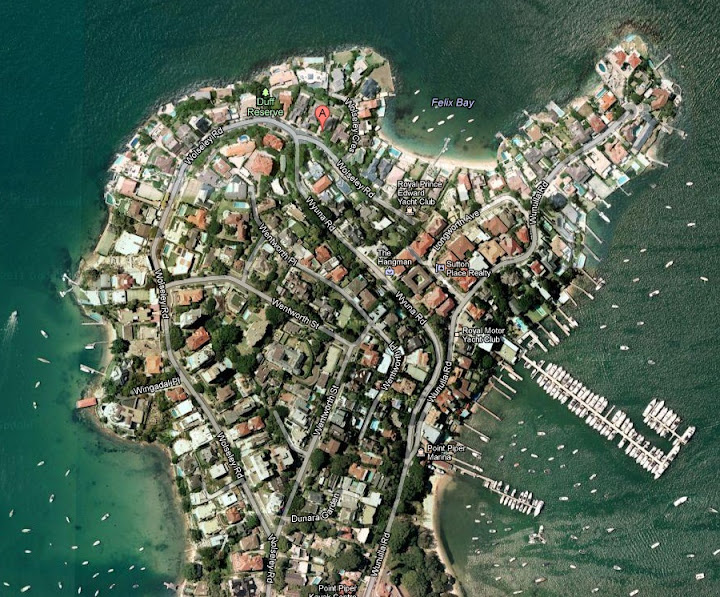 Point Piper In the News:

Lucy Macken October 11, 2014
If anyone needed reminding where Australia’s most expensive suburb is they need only look at five sales this year. Every sale above $30 million in 2014 has been in Point Piper, with most of the action centred on just one street.

Two iconic Sydney trophy homes have been listed for sale that now go head to head in a battle for upmarket buyers.

View of Altona, Point Piper, as seen from the water / Pic: John Grainger (has Federation bones!)

SIX years after it was first mooted for sale, one of Sydney’s best-known properties – the glamorous harbourfront mansion Altona – has finally been sold, for a reputed record price of $54 million. The new owner is believed to be a Chinese-born businessman from Melbourne.

Foreign-buyer stamp-duty charge unsettles luxury-home market
Chinese property developer Wang Zhijun is selling Australia’s most famous trophy home Altona in Point Piper.
The sudden decision to list the waterfront mansion follows the sale this week of the adjoining block of land that was previously part of the estate for more than $18 million.

Wang and his wife Guan Hongyan are now permanent residents and have no plans to leave Australia, according to the family spokesman.


http://www.youtube.com/watch?v=g-UB4g-J9rY
Byron Bay-based vendor Deke Miskin last night refused to confirm the sale, but sources claim Mr Miskin has gone close to doubling his 2002 investment on the Point Piper property, with the final sale price put at $54 million, which is a Sydney residential property record.

Australia. Wolseley Road, Point Piper, is currently ranked the 9th most expensive street in the world, at $20,900 per square metre.

Eight properties of the top 20 prestige properties in Sydney are located in Point Piper.[1]

“Point Piper is home to many prominent Australians including:

Sold three times in four years!
Nov 14, 2007
1. ELSTREE, the hillside 1920s Point Piper residence, has been sold for about $18.5 million to the Channel Seven director Bruce McWilliam, who owns the neighbouring contemporary house on the harbour.

2. Mr McWilliam paid $18.5million for 138 Wolseley Road in November last year (2007), before selling it to Mr Tilley for a $3.5million capital gain and 100 square metres less land (which Mr McWilliam is said to have kept to build a garage).

3. May 2011, ELSTREE sold again:
Settlement took place on the $18 million sale of a property in Wolseley Road, Point Piper. Named Elstree, the circa 1920s residence was sold by Tiffany Tilley, the wife of the businessman Ben Tilley, to the equities fund manager Warwick Johnson. – **Margie Blok[10]

More news about the sale of ‘Elstree’: 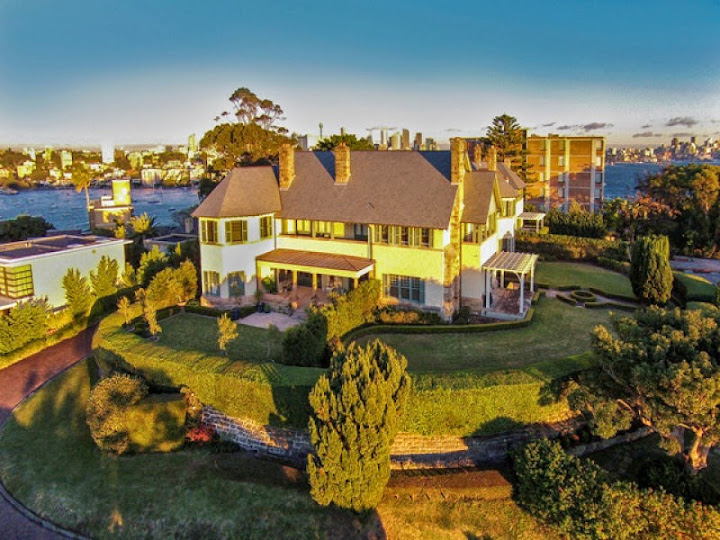 Kilmory is located on the northeastern bend of Wentworth Street on the highest part of Point Piper. Because of this elevated position the building and its landscaped grounds can be seen from areas in Vaucluse, Rose Bay and Darling Point.[15]

Kilmory is the largest site on the Point Piper peninsula and the last of that suburb’s grand estates. The property has exceptional local heritage significance and is listed as a heritage item in Woollahra Local Environmental Plan 1995 (LEP).

“Kilmory”, 6 Wentworth Street, Point Piper was commandeered by the military during WW2 from Sir Alexander MacCormick to establish Eastern Area Headquarters on 15 May 1942.
“Kilmory” was built in 1912 for Sir Alexander MacCormick, who was a surgeon and a member of the Sydney University Medical School. After the war, it became Riverview College and then became a Franciscan Retreat. [16]
“A grand though simple house, it uses the harled walls, slate roofs and robust stone chimneys characterstic of architect C.R. Mackintosh (1868-1928) such as the houses Hills House, Helensburgh, Scotland, and the house built for C.F.A. Voysey (1857-1941).
It was known as the Ave Maria Centre, and is the Provincial House of the Roman Catholic Order of the Franciscan Missionaries of [17] Mary. seven apartmentsNow it has been converted into just seven highly-individualised apartments within the creatively reinvented “Kilmory” security mansion (c.1913), made for entertaining with scenic Bay and Harbour views..[18]

Built ca.1907 as a waterfront Edwardian mansion, Danmark was converted in the 1930’s to accommodate 14 spectacular apartments, retaining its private access to Seven Shillings Beach and the gardens above.

See also: Architect John Horbury Hunt
A powerful yet restrained composition in brick and timber, large complex, manages to successfully modulate its scale so that it appears disarmingly domestic.

Fairwater is a large domestic residence constructed in 1882 with additions made in c.1901 and 1910, with former stable (c.1900s) and garage (1930), situated on a large suburban allotment fronting Port Jackson with garden landscaping. 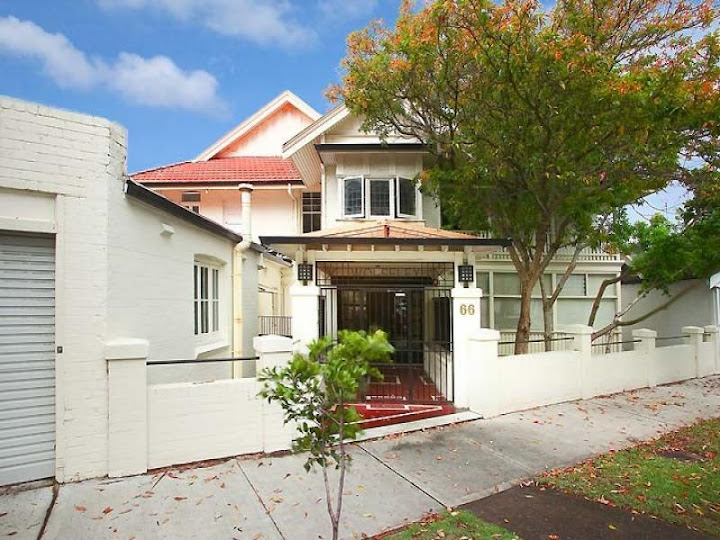 The building was constructed sometime after 1915 is significant as a large, prominent, two storey residential building in the Federation Arts and Crafts style. The building has retained its original scale and form on the exterior even though it has had a number of additions and has been modified for use as flats. 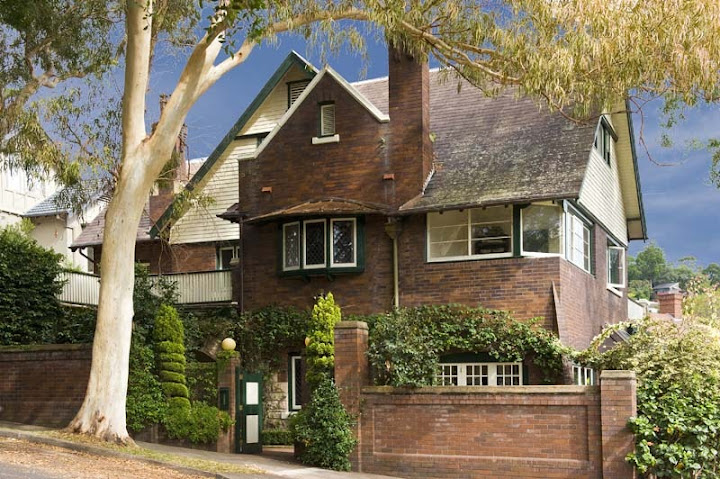 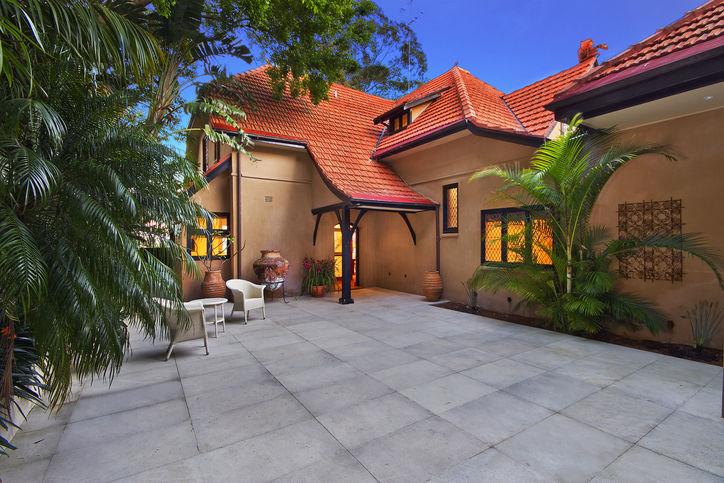 “The spirit of a holiday retreat pervades the home and is particularly prevalent in the garden where an infinity edge pool, sleek timber decking and a chic Balinese inspired cabana with bathroom and viewing platform all combine to stunning effect.

Point Piper has clocked up yet another waterfront trophy home sale, the sixth this year to sell for $30 million or more.
The Edwardian-era mansion of liquor baron John Piven-Large sold on Friday, bringing the suburb’s sales tally to some $200 million worth of prime real estate sales within five months.

Click for more photos
After being listed with a few agents, the campaign was handed to Pillinger’s Brad Pillinger in August, with a more realistic guide of $30 million-plus.

The mansion last traded as a duplex in 1991, when Mr Piven-Large paid $2.2 million for one property and $1.3 million for the other.

Mr Piven-Large is known to have made much of his fortune when he sold a 45.7 per cent stake in Cellarmasters to Foster’s Brewing Group in 1997 in a deal worth $160 million.

2013: The Edwardian waterfront home of John Piven-Large has hit the market, offering five bedrooms, a tidal beach and a swimming pool with price expectations of more than $40 million[22] The home was first called Ni-No-Nan after its 1912 construction, a name that has thankfully been lost in time. Historically, the home is significant as one of only a small handful of the original constructions on the peninsula.[23] 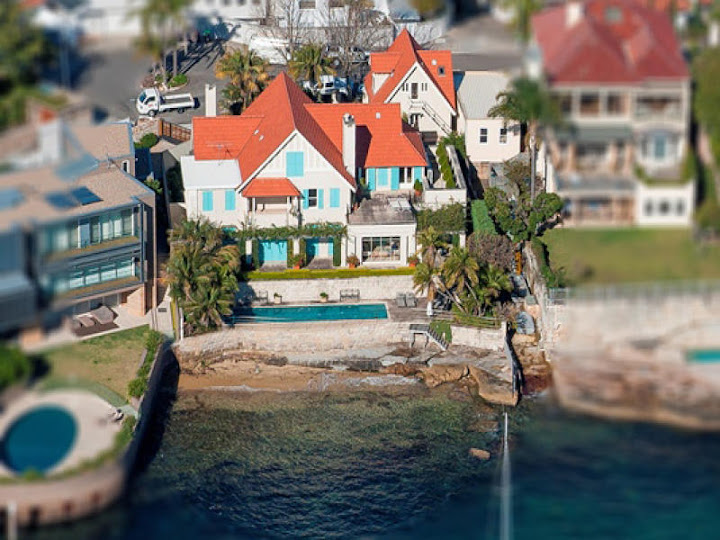 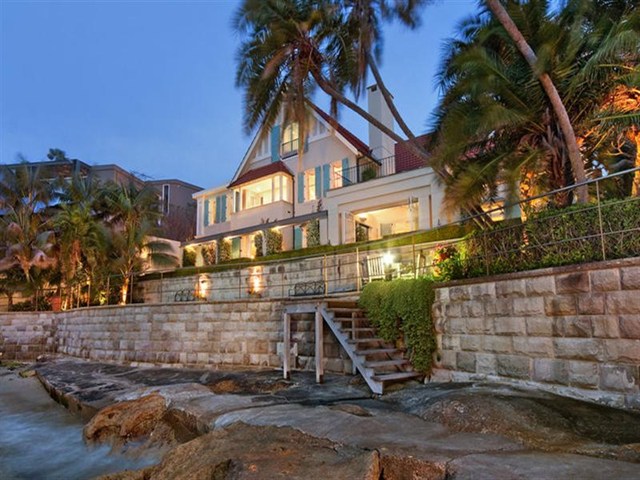 A meticulous two-year architectural renovation has restored this magnificent waterfront residence to its original Edwardian glory. Including a 30m private tidal beach, the majestic home enjoys a rare position remarkably close to the water, includes a separate apartment and enjoys panoramic harbour district views including the Harbour Bridge
. 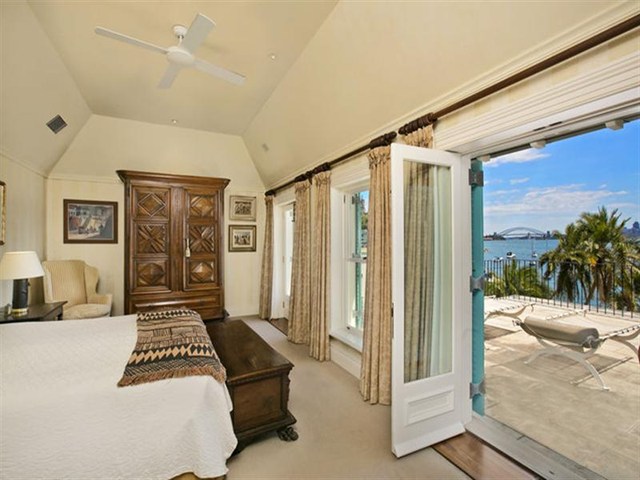 Photo: Anthony Johnson
It was a clever purchase next door because that enabled them to carve some 600 square metres off that title to expand his waterfrontage. The remaining property was then redeveloped into a duplex and sold off in 2011 for $13.6 million to Ben and Tiffany Tilley.

Photo: Nicole Frost
The Mediterranean-style home was built in the 1930s and has retained many of its ornate features, such as arched roof tiles, arched doorways and windows and juliet balconies, all set behind elaborate wrought-iron gates.

The Page family home was listed last July with initial $28 million hopes with another agent before Bill Malouf, of LJ Hooker Double Bay, and Ken Jacobs, of Christie’s International, took over the listing last September with more subdued expectations.

Now configured as two dwellings, lawyer Michael Page, of Page Partners, and his wife Maria have downstairs, and jeweller Charles Page is upstairs.

The Sheins’ purchase price in Point Piper almost matches the combined $21.9 million the couple spent in 2000 and again in 2010 buying their adjoining waterfront properties in Vaucluse.

‘Elaine’ rumoured to have sold for a new price record

Sydney’s real estate rumour mill has been in overdrive this week with talk that Australia’s priciest home has sold, but the record-breaking price is yet to be revealed. Elaine, a vast estate at 550 New South Head Rd, Point Piper, which has been in the Fairfax family for four generations, was listed earlier this year with a price estimate of “about” $100 million.

While the $100 million price tag was widely reported when Elaine hit the market in January, Mr Jacobs told The Daily Telegraph there was “no actual price”.

In the Fairfax family for more than a century, the historic waterfront property is one of the last original harbour-front holdings to be offered for private sale.

The multimillion-dollar view from the balcony at Elaine in Point Piper. Source: Supplied
the home was first called Ni-No-Nan after its 1912 construction, a name that has thankfully been lost in time. Historically, the home is significant as one of only a small handful of the original constructions on the peninsula.