Indooroopilly is liberally sprinkled with old mansions, and none better reflects the grandeur of the suburb’s salad days than Ross Roy.

Ross Roy later became the heart of St. Peter’s Lutheran College when the school opened in the 1940s

The area now known as Indooroopilly was surveyed in 1858 and first settled in 1860. The area was subdivided into farms and later into residential allotments. Prior to 1870 there were few houses built in the area but settlement of the district received impetus from the opening of the Brisbane to Ipswich railway in 1875. During the 1880s and 1890s Indooroopilly developed as a fashionable suburb. Many substantial, architect-designed residences were built on large allotments. 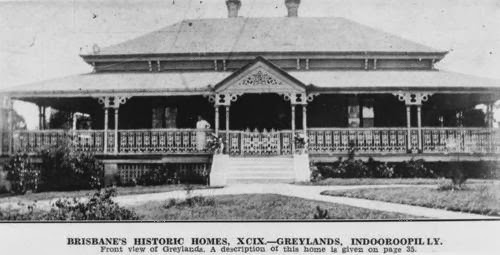 THIS favoured place was chosen later by many keen and far-sighted men and women as the location of beautiful and substantial homes, which stand there to-day.

Local residents, who gathered in Musgrave Park opposite the building, said they were disappointed to see one of Brisbane’s oldest homes destroyed.

Greylands was the home of Graham Lloyd Hart, founder of law firm Flower & Hart which has been prominent in Brisbane legal circles since the 1870s. That this was the location of Vida Lahey’s much admired painting of women working in the laundry, Monday Morning, adds social import to the house

The home of Mr LJ Keating, on Westminster Road was constructed to the design of the late Mr Richard Gailey and is considered to be one of the outstanding examples of residential architecture in Brisbane.

Indoocombe was the original name of a large brick house built in Indooroopilly in c1897. It became the home of the Munro family who renamed it Ross Roy and the house and its substantial grounds became a centre of high society life. Photographs from this time show the grounds immediately surrounding the house to be landscaped and well maintained and the remainder of the property being native growth with a cleared and grassed understorey. The Munros lived at Ross Roy until their deaths. After the finalisation of the estate, Ross Roy was sold to the Lutheran Church in December 1944 for £16,000.[1] The villa occupied 16 acres (6.5ha) and was established as St Peter’s Lutheran College opening 25 February 1945. [4]

‘Ross Roy’ was constructed in 1897 to a design by Claude W. Chambers, as a residence for tea merchant Daniel Collings and family and named Indoocombe. Passed to the Munros around 1910, it was given its current name and used as the family residence as well as the setting for several charitable functions. The house, with six acres of land, was sold to the United Evangelical Lutheran Church in 1945 and repurposed as a secondary Lutheran school. The Langer chapel, designed by important and influential architect Karl Langer, was built for the school in 1967-8. Both buildings have continued to be used by the St Peter’s Lutheran College, which has grown to become the largest co-educational Lutheran school in Australia.[5]