Beverley Ussher and Henry Kemp were Melbourne Architects who formed a “brilliant partnership”. Both Ussher and Kemp had strong Arts and Crafts commitments, and both had been in partnerships before forming their own.[1]

The Buildings of Henry Kemp (before the partnership)

The Buildings of Beverley Ussher (before the partnership)

Ussher’s first partner was Walter Richmond Butler (1864-1949), an architect who moved to London and to work with J. D. Sedding. He was accepted into the Arts and Crafts and Domestic Revival circles centred on William Morris and R. N. Shaw, among whom his closest friend was Ernest Gimson (1864-1919).

In June 1888 Butler and Ussher left Sedding’s office and sailed for Australia. Three of Butler’s brothers and one of his sisters also settled in Australia.

The Professional Chambers building in Collins Street was designed for the Trustees of the Independent Church by Beverley Ussher of the firm Ussher and Kemp. The building was finished in 1908.

Two years later the emphasis on local timber was even greater in Ussher’s house for J C Foden in Canterbury:

The Houses of Ussher and Kemp

“The pre-eminent Melbourne firm of Ussher and Kemp was responsible for nearly every impressive Federation-era style house in Kew and Mont Albert of the period.”[9]
“Ussher’s work falls into two categories,

“In the ‘gable genre’ usually associated with Henry Kemp’s name, there are three categories of designs:

“All examples partake of the pre-renaissance vocabulary of half timbering, jettied storeys, gabled roofs, lead lighting and strongly expressed chimneys

Ussher joined with Kemp and developed the style with the characteristic features of tiled hipped roofs, timber verandah decorations, and a strongly three dimensional form with a corner emphasis.

Demolition imminent!
Architecturally significant for: its adaptation of Queen Anne to a tight site; the complexity of its elevation and planning; the use of the unusual splayed corner on a Queen Anne design; and for the outstanding fence, rare on Queen Anne houses throughout Metropolitan Melbourne.

Built during Hawthorn’s period of Edwardian prosperity for grocer, Benjamin Ratcliffe, this substantial brick residence was rated first in 1903-04 as a brick house of eleven rooms, unfinished, Net Annual Value 90 pounds. The previous year, the site had been vacant land. The valuation went up to 100 pounds in 1907, when the property of eleven rooms was known as Avondale and occupied still by the Ratcliffe family.

Built Circa 1909 for Herbert Parsons a spice trader and set on a magnificent allotment (2,089sqm) with superbly landscaped and maintained gardens, this landmark residence showcases the elegance and graciousness of classic Ussher & Kemp architecture, whilst providing unparalleled family living and entertaining areas both inside and outside.

Architects Ussher & Kemp acted for Mellor when the house was connected to the MMBW sewer, in 1907, and it appears that they were also the designers.

Mellor Residence, Mont Albert Road Canterbury
At Coorinyah, the broad hipped roof is the dominant backdrop for a number of gabled roof forms, chimneys and the unusual shingle- spired look-out, with its attached chimney. Below the eaves line giant arched timber supports spring between gabled verandah or room bays, almost removing the visual support for the large roof expanses above it.

Cottage by the Sea orphanage at Queenscliff (1892)

“This perfect example of a gracious residence standing on a cul-de-sac corner showcasing lavish architectural allure behind sun-filled garden is undoubtedly one of the BEST.

Campion College, 99 Studley Park Road, Kew was designed by Architects Ussher and Kemp. It was built in 1906 as a home for S.W. Gibson of the firm Foy and Gibson, Drapers, of Melbourne and was originally called Dalswraith. 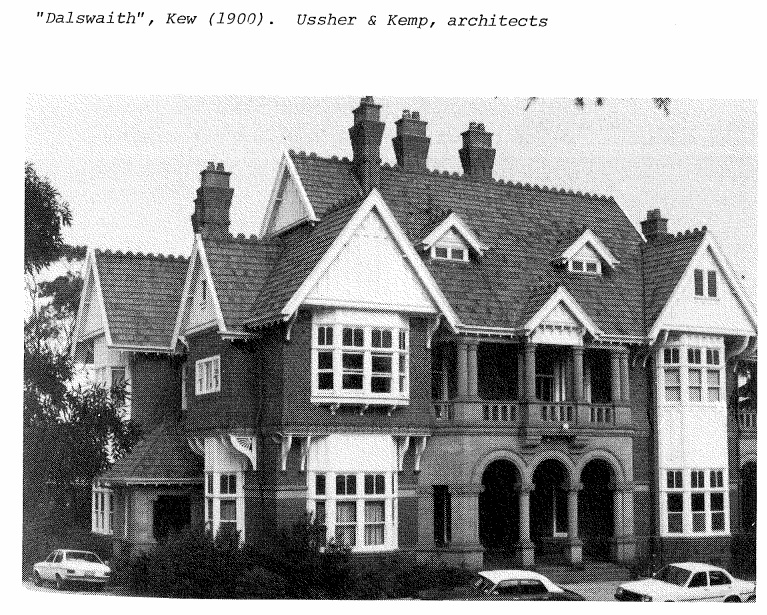 Dalvui at 4310 Mackinnons Bridge Road. Noorat 3265 is a widely admired property, with its famed gardens and grand home.

Registered on the RAIA 20th CENTURY BUILDINGS REGISTER (but not heritage listed) Davies House, designed by architects Ussher and Kemp,

Eildon, now known as the Napier Club, was built as a two storey, red brick residence and surgery for Dr David Laidlaw in 1904 to a design by architects Ussher and Kemp in the Federation Queen Anne style.

Eildon is an extraordinary example of the work of architects Ussher and Kemp who, both individually and in partnership, designed, perhaps, the finest range of Federation Queen Anne houses in Victoria.

Drawing from State Library of Victoria[21]

Wee Nestie is placed askew on its owner site, it is aligned, unlike its neighbours, neither perpendicularly nor diagonally to the street. A large indented gateway was at a comer splay in the allotment and an asphalt tennis court on the west of the house.

Atypical however is Ussher and Kemp’s skillful and less frenetic placement of mass and openings to achieve their picturesque aims.
A new pavilion wing has been added to match on the eastern side and, although too close a replication of the original, it is far more successful than the unfortunate wing on the west. Mature shrubs and asphalt paving fit the period.[22]

This prominent and substantial Queen Anne Style house is located on the north-west corner of View Street. The design is picturesque especially at the roof level, which is clad in terracotta tiles with decorative terracotta ridge capping and finials. 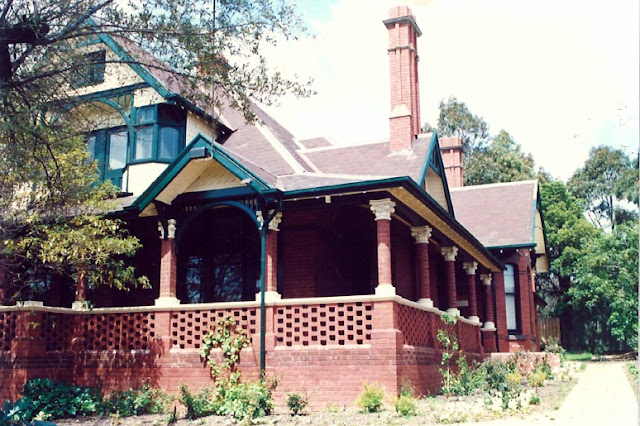 Architecturally significant at the State level as one of Ussher and Kemps’ best and most sophisticated designs, integrating unusual brick detailing and an atypical symmetrical arrangement.

“One of Balwyn’s Earliest Homes”

A picturesque Federation era home, set amidst delightful private gardens on an expansive allotment of some 1172sqm (12,620sqft).

169 Canterbury Road is one of the more prominent designs by the renowned residential partnership of Ussher and Kemp at a time when the practice was at its peak. It compares directly – and favorably – with other leading designs of theirs, particularly among their two-storey houses, and is a direct predecessor to Kemp’s renowned Dalswraith in Kew. 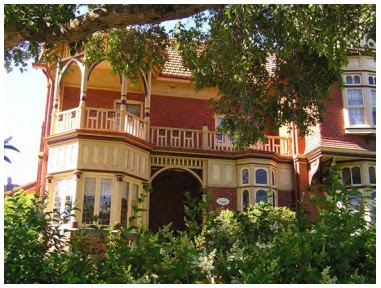 169 Canterbury Road is a two-storey Federation house with a south-facing verandah flanked by a gabled wing, facing Canterbury Road, to the immediate south, and a corner tower formed from a curved bay built into the verandah. A smaller single-storeyed bay is built into a half-timbered screen near the front door. 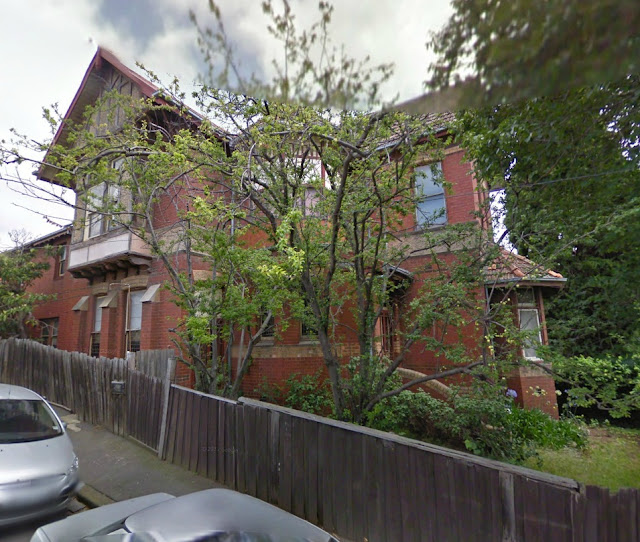 Architecturally, a near original prominent and early example of a common suburban style, designed by the Queen Anne Villa specialists Ussher and Kemp: of metropolitan importance. Historically, for a long period one of the few sources of medical attention in the local communtiy: of local importance. 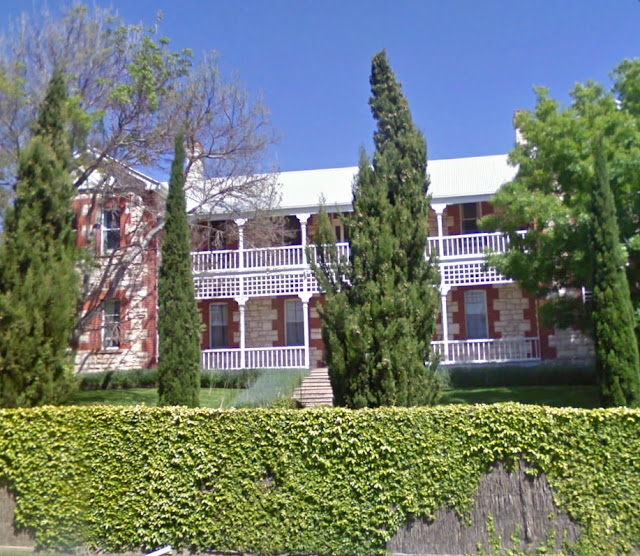 An essentially intact well-designed and detailed example of the Federation style, Marlborough House was constructed in local materials. It exhibits the regional motif of tuck-pointed red brick quoins to a limestone building. Important architectural features such as the timber verandah with original posts, balustrade fretwork, brackets and floor, twin gable ends with infill strapwork, limestone brackets and intact joinery remain. It is of interest that the symmetry of the composition relied on the construction of the ballroom wing. This implies an optimism regarding the success of the project when it first started. 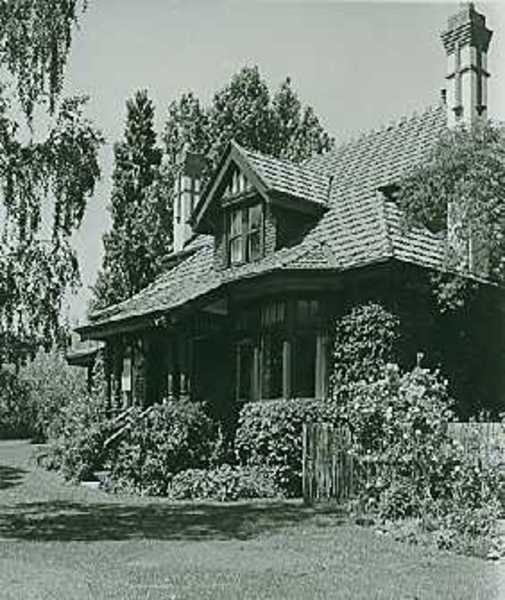 Built between 1901-10 to the designs of architects Ussher and Kemp, the Norman House is a fine example of the hip roofed genre of the so-called Melbourne Queen Anne house and one of the most representative works emanating from Melbourne’s most renowned firm of residential architects at the time of Federation.

Amongst the best examples of Queen Anne villas in Hawthorn, substantially intact and illustrating particularly well, the strong garden orientation of the style. Illustrative of the high quality for houses constructed on Hawthorn’s major boulevards.

A beautiful example of Ussher & Kemp’s garden bungalow adaptation of the Queen Anne retained in its lush garden setting of near 20,000sq ft.

“This perfect example of a gracious residence standing on a cul-de-sac corner showcasing lavish architectural allure behind sun-filled garden is undoubtedly one of the BEST.

An excellent collection of Ussher and Kemp architectural drawings was made available for copying by the Archives. The Society funded this important project which included hand coloured drawings for “The Gables” and other Finch Street houses. The National Library grant of S4000 has been received and work will begin immediately on the cataloging and storage of these most important plans.[29]