The Federation Heritage of Colac, Victoria

Colac is a peaceful town with plans to convert and use its heritage buildings for generations to come.

Colac displays a fine collection of Federation and Queen Anne architecture, with excellent examples of the most important styles. We are so fortunate in their high standard of preservation, and wish that more would be classified for preservation by the Victorian heritage authorities.

This flowering of Federation Queen Anne style was mostly a residential style established in the 1890s boom, which was inspired by the work of famous architect Richard Norman Shaw, and by the Arts and Crafts movement in England, but also encompassed some of the more stylised elements of Art Nouveau, which gave it a more decorative look.

Most of the older Colac area homesteads were designed by architects Davidson and Henderson, who were tutored mostly in Gothic Revival designs and were influenced by the French Romanesque. This, in combination with the considerable input of their clients, has produced a curious and engaging blend of masses and patterns.

This post was inspired by the photostream of raaen99 on flickr for which I am very grateful.
Other information is from Heritage Victoria and Colac Community website. Thanks to all.
Colac 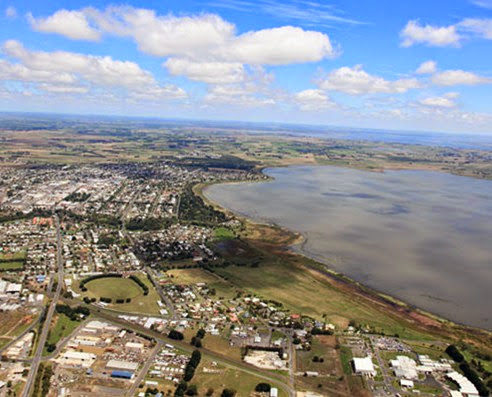 An early European visitor to the area was novelist Rolf Boldrewood (nee Thomas Alexander Browne) who, in Old Melbourne Memories (1884), recalls visiting Lake Colac in 1843 and finding it full of wild ducks, geese and cranes.

Murray, along with pastoralists William Robertson, Alexander Dennis and John Calvert all established large runs in the area, complete with substantial homesteads, some of which still exist today.

It was in 1857 that, in nearby Winchelsea, Thomas Austin released rabbits on his land. They reached plague proportions within a few years.

William Robertson purchased the rights to 5000 acres at Colac in 1837. The Robertson estate at Colac was without exception the finest estate in one block in Victoria. After the death of Mr. William Robertson his four sons entered into partnership, which continued for a number of years, the business being under Mr. James Robertson’s management.

The Colac Heritage Walk takes in the architecture and history of many buildings around town including churches and the railway station.Further information and maps are available at the local visitor information centre: Corner Murray Street (Princes Highway) and Queen Street, (03) 5231 3730

Colac Botanic Gardens are situated on the southern shore of Lake Colac. The land was set aside for that purpose in 1865 but plans were not prepared until 1910 by William Robert Guilfoyle, the director of the Melbourne Botanic Gardens.

“Then immediately after that, they’ll be working on the interior,” she said.
Mr Chivers said the renovations and units would cost about $14 million.

He said it was “inevitable” the project would involve Colac workers and he planned to finish the refurbishment by the end of the year.
“It’s a great country project, we’re looking forward to kicking it off and giving back to the community,” he said.

Mrs Malone said the development would mean “a substantial contribution to the area”.
“We’re keen to put money back into the community by hiring locals where we can.”
Mr Rich is also director of Melbourne’s Inwood Constructions and he will help restore Balnagowan with Valyarra’s builders.

“Step into a grand and magnificent home that has for 156 years graced the banks of Lake Colac.

Moore Street, west Colac. Built in 1855–56 for Edward Bage, the District Surveyor who probably also designed the building, it is one of the oldest surviving houses in the area, now nestling inconspicuously in a ‘suburban’ streetscape. A single-storeyed building in the ‘Australian Colonial’ style, with English, Georgian and Gothic influences, its extensive verandahs have decorative fretwork and iron posts. Brick stables and groom’s quarters still exist, but the extensive gardens have been considerably reduced. A private residence, classified by the National Trust.

Coragulac House is a notable Western District homestead and a characteristic rather than exceptional work of Davidson and Henderson. The elaborate, high quality Art Nouveau ornamentation is a notable feature readily identifiable with the work of Guyon Purchas.

– Corner of Gellibrand and Manifold Streets, Colac
– from photostream of raaen99

On the corner of Gellibrand and Manifold Streets, Derrinook was built of timber in 1900 as a private hospital in the Early Federation style, with many elaborate, tall chimneys capped with ceramic chimney pots. One of the first buildings in Colac to employ electric lighting, it was converted after the second World War into self-contained flats.
“Derrinook” was originally built as a private hospital for Doctor William Henry Brown (1861 – 1926) in 1900.

Built in the Federation Queen Anne architectural style, “Derrinook” is, unusually for the style, built of timber. Federation Queen Anne architectural style, which was mostly a residential style which was inspired by the Arts and Crafts movement in England, but also encompassed some of the more stylised elements of Art Nouveau, which gave it a much more decorative look.

Built in 1873, Yeo homestead is an example of the work of the Scottish trained western district architects, Davidson and Henderson.
James Austin, an extremely wealthy pastoralist with extensive western district land holdings, was a celebrated Victorian pioneer and a Mayor of Geelong. He lived in retirement at Glastonbury Abbey, Somersetshire, from 1859-96. Yeo was built for his son John.

Built in 1907 for Doctor Richard Horace Gibbs, on the rise of a hill in the prominent location of the corner of Bromfield and Corangamite Streets in Colac, stands the grand two-storey red brick residence, “Glenora”.

Coragulac House and the nearby Glen Alvie homestead are the only two surviving properties of the once powerful and extensive Robertson pastoral empire, the original homesteads having been demolished.The following periodicals contain references to this building:
Geelong Advertiser 4 March 1874
Geelong Advertiser 7 June 1875
Geelong Advertiser 28 October 1875

Built in 1892 on the rise of a hill in the prominent location of the corner of Bromfield and Corangamite Streets in Colac, stands the grand two-storey red brick residence, “Lislea House”.

“Lislea House” was built for Doctor Wynne, a local practitioner, for his use as a stylish residence and surgery. “Lislea House” has been constructed in the popular Federation Queen Anne style, which was mostly a residential style established in the 1890s which was inspired by the Arts and Crafts movement in England, but also encompassed some of the more stylised elements of Art Nouveau, which gave it an more decorative look. “Lislea House” has a very complex roofline, which is typical of the Federation Queen Anne architectural movement, as is the steeply pitched roof, ornate wooden fretwork that graces the return verandah and the exaggerated height of the chimneys.

Woolshed & Garden
A bluestone homestead and woolshed built in 1871 for Hon James Ford Strachan, with substantial two-storey additions of 1923.

Mooleric homestead and garden, located in the western district of Victoria, covers an area of 0.4ha. The original bluestone homestead was constructed by architects, Davidson and Henderson, for the pioneering merchant and politician, James Ford, Strachan in 1871. The garden was developed from a design by William Guilfoyle in 1903 who was a friend of Mrs Isabella Ramsay who was then the owner of Mooleric.

FIREFIGHTERS who helped save Birrregurra’s historic Mooleric homestead from a 250-hectare fire this week are “angels”, the homestead’s manager says.

Mr Stevens said the homestead’s staff prevented the fire from spreading into 300 hay bales close to the home. 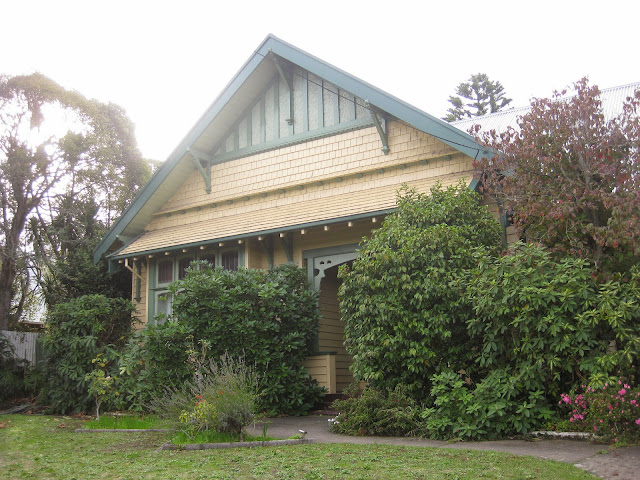 Situated on the crest of a hill overlooking the Colac township, nestled on a large block well back from the street, is this wonderful Edwardian villa featuring a concoction of Art Nouveau stained glass, half timbered gabling and tall, chimneys.

Built around the turn of the Twentieth Century, this villa has been built in the Queen Anne style, which was mostly a residential style inspired by the Arts and Crafts movement in England, but also encompassed some of the more stylised elements of Art Nouveau, which gave it an more decorative look. The weatherboard from which the villa is built, the shingling of the dominant gable and the awning that rund across the facade are all in keeping with the Arts and Crafts movement. Yet the stylised stained glass windows and door panels, ornate chimneys and the fretwork around the enclosed porch are very Art Nouveau in design.

Queen Anne style was most popular around the time of Federation. With complex roofline structures, ornamental towers of unusual proportions and undulating facades, many Queen Anne houses fell out of fashion at the beginning of the modern era, and were demolished.

– Corner Gellibrand and Dennis Streets, Colac
– from photostream of raaen99

Like other prominent buildings around Colac owned by the professional classes, such as “Glenora” and “Lislea House”, this building served two purposes; it was built for use as a stylish residence for Doctor Bayer as well as his dental surgery. The house, believed to be first brick veneer house built in Colac, has been constructed in the popular Federation Queen Anne style, which was mostly a residential style which was inspired by the Arts and Crafts movement in England, but also encompassed some of the more stylised elements of Art Nouveau, which gave it an more decorative look. It has a very complex roofline, including a splendid corner bay window topped by an ornamental tower, half timbered gables, stylised Art Nouveau panels of stained glass in both the windows and doors and exaggerated chimneys with ornamental detailing.

Built in 1912 on a deep corner block as a replacement for the original 1855 Manse next door, this former Presbyterian Manse may be found in the Western District town of Colac.

Elegant in its proportions, this red brick building crosses two very different popular architectural styles. The former Presbyterian Manse is typically Victorian in shape, with a central front door and a beautiful return bull-nosed verandah of corrugated iron on the main street façade with a bedroom wing on the quieter side street façade. The arched windows of the former Presbyterian Manse are also very Victorian in style; large and arched. Yet it also has features of the Arts and Crafts movement, such as the choice of red brick for the construction and the roughcast treatment of the walls under the gables. It also features Art Nouveau fretwork along the verandah, panels of Art Nouveau stained glass in the front door, and the tall chimneys that are typical of the Federation Queen Anne architectural movement of the early Twentieth Century.

“Built in Colac’s religious precinct on Pollack Street, the former Parish Hall and kindergarten of Church of St. John the Baptist and St. John the Evangelist is nestled alongside the Colac Church of England.

The Church of St. John the Baptist and St. John the Evangelist was added to by Louis Reginald Williams in 1933. As part of that, an Arts and Crafts style Parish Hall and Kindergarten Room were added next to the church, using funds raised by local parishioner Esther Walton and the Young Helpers League. The building is very domestic in style, and is built from locally produced brown clinker bricks. The shingling on the bargeboards, the brick and stone detailing, and the windows of muted blue and yellow glass are all typical of the Arts and Crafts movement, as is the round front door. Louis Williams loved designing in the Arts and Crafts style, and was equally enthusiastic about Gothic architecture, so the hall features a small amount of detailed gothic detailing which seems somewhat at odds to the rest of the building’s uncluttered design.”