Tara Estate
The streets in the Tara Estate are pure real estate gold.
from the Camberwell Conservation Study 1991-Significant Areas 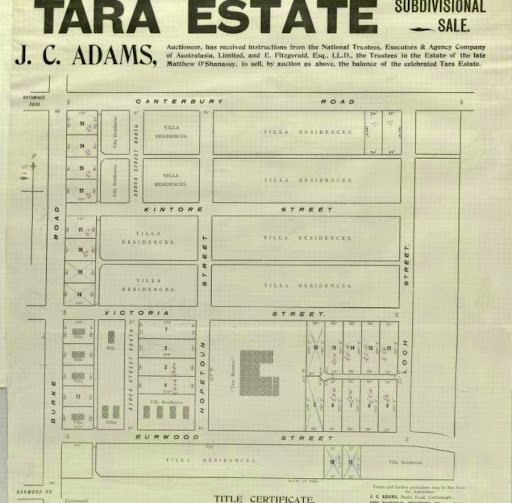 “Of all of the Victorian era estates in Camberwell this is by far the most complete and distinguished architecturally.”
“Each house has a high degree of integrity and often has been custom-designed to achieve an unique variation on the prevailing Italianate and Federation styles.

“Because of its high integrity to the late Victorian and Edwardian eras, the precinct provides a strong sense of period which
is further underscored by its near island nature, with busy traffic routes on all boundaries isolating the estate.”

One of the larger subdivisions in

Camberwell was the Tara estate with the sale taking place on 27 October 1888. 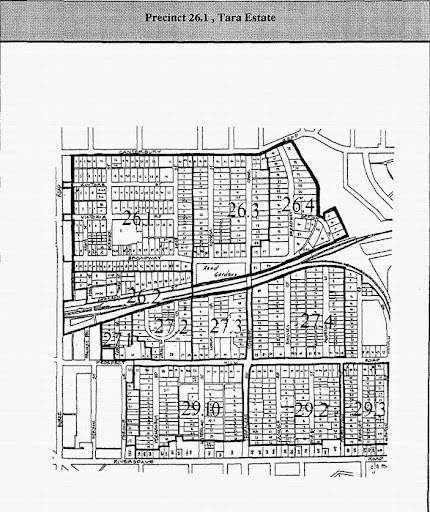 O’Shanassy’s Tara estate was controversial because of the assumed gains he made in the subdivision of the land around his mansion, Tara which benefited from the route taken by the new railway through Camberwell decided by his government’. The subdivision plan was
lodged in 1890 by THE ‘land-boomer’ solicitors, Fink & Co., for some 169 lots averaging 54 feet by 153 feeti n size.

Do the residents of Kintore Street and Victoria Road debate which street is better? If so, no one would ever win the argument. How could you possibly choose? Bordered by Canterbury Road, Burke Road and Broadway, the streets in the Tara Estate are pure real estate gold.

from the Camberwell Conservation Study 1991-Significant Areas
Kintore street is outstanding, particularly at its east end, as an example of continuous development of substantial villa houses each with distinctive detailing and design aspects including many original or empathetic fences and plantings.

The east end of Kintore Street has two individually significant houses acting as the eastern portals to the street.

2. Victoria Road
Victoria Road is one of several streets in Camberwell that form part of the former Tara Estate. Once the landholdings of Irish-born John O’Shanassy, Premier of Victoria in 1857 and then again in 1858-1859, O’Shanassy built his home on 16 acres, at a time when the area was slowly becoming a location of choice for professionals commuting from the city.

Victoria Road has the typical mix of Edwardian and Italianate styled villas in brick and stucco, but unlike Kintore Street some new development is apparent, albeit in the minority.

Broadway has diversity within the era of c 1895 to the 1920s,including different house types such as the Edwardian duplex at 35-37 Broadway.

Other Notable Houses in Broadway Camberwell:

The north-south streets in this precinct have reduced housing content by one side being taken up by the side frontages of other streets (Loch Street) as well as large complexes taking extensive frontages (Berwick Street).

Taken as one continuous elevation, Loch Street east side, has a high integrity to the late 19th century and early 20th century period, exemplifying a number ofdifferent house types from that period, each designed in a distinctive manner and each relatively well-preserved (see also Broadway).

Broughton Hall, formerly Tara, first constructed in 1858 with additions and alterations in 1883, is architecturally significant as an early Italian Renaissance Revival mansion in Victoria. It employs sophisticated ornamentation and is unusually grand for a residence of this period.

The Irish immigrant with limited schooling coming from the mercantile classes is able to hold the top office in this prestigious colony with gold money flowing in as if there is no tomorrow.

The O’Shanassy family continued to live at Tara until the turn of the century. Since then there have been a number of owners until it was bought by the Anglican Church in 1951 who named it after the first Bishop of Australia. These various owners have subdivided and sold off the land of the estate until Tara is now confined to a large suburban block. Tara is now called Broughton Hall.

View GalleryHave a look inside…

Take a virtual tourGet a closer look with our 3D tours

Another Tara in Camberwell