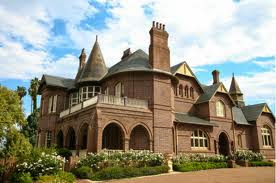 Baroona (Range Rd, Whittingham via Singleton, NSW) is a striking High Victorian residence at Whittingham, and is a 26-room house with observation tower. It is an indicative place on the Register of the National Estate.

Trevenna is the residence of the Vice-Chancellor of the University of New England, in Armidale, New South Wales,

The Highlands is one of the last houses John Horbury Hunt ever built.

The historic 1886 homestead Glen Alpine near Tamworth has burnt down, two days before its sale for $4.5 million was due to settle.

All that remains of the heritage-listed homestead that was designed by architect John Horbury Hunt are five chimney pots and the original cellar.

From John Horbury Hunt – From Wikipedia, the free encyclopedia
The following Hunt buildings are listed on the Register of the National Estate.[5]

Other buildings by Hunt: